Smaller Fighters Raring to Go in Wild West
Written by: David A. Avila 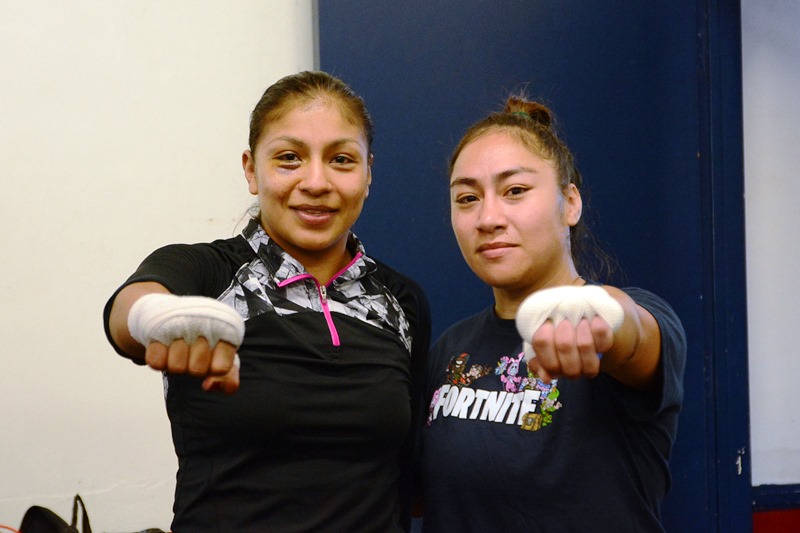 It was riveting stuff this clash of cultures and fighting styles.

After watching the female sparring action on Saturday afternoon in the busy Maywood Boxing Gym – the same gym that was used by Venezuela’s Jorge Linares to prepare for his fight last weekend in Anaheim – it starkly reminded me and others that female prizefighting in the West Coast has been largely ignored.

Mexican style fighting is not gender-specific; women also prefer that same style as was seen this past Saturday when Adelaida “La Cobra” Ruiz and Lissette Medel sparred with the world champions from Tokyo in front of dozens of curious male boxers.

All those inside the gym applauded simultaneously after the rousing sparring sessions. It was high-tech warfare female style and it was well worth spending the entire afternoon to witness it.

“You don’t always get a chance to spar with fighters of this quality,” said Ruiz, an undefeated super flyweight whose back-to-back knockouts in 2018 were candidates for the Knockout of the Year that year. “I really enjoyed it.”

For the past four years only two female fights featuring West Coast-based fighters were shown and that was in 2019 with Seniesa Estrada vs Marlen Esparza and Louisa Hawton vs Lorraine Villalobos. Both of those fights were televised or streamed and both proved to be exciting bouts.

It is definitely time for major televised boxing cards to include the West Coast female fighters. So far only the East Coast has been serviced adequately. And if you think the West Coast doesn’t have boxing fans, well, someone is not doing their homework.

Mayer no longer lives in California but her family still resides in the Los Angeles area. The NABF super featherweight titlist has a challenge coming from Hernandez who has fought against the very best in her career. This will be Mayer’s greatest test yet.

Hernandez is the last boxer to defeat Layla McCarter and that was nearly 13 years ago. That’s a testament in itself to Hernandez’s fighting prowess. She also handed another American prospect Selina Barrios her first and only loss last year.

It’s a very interesting match for both. Mayer could very well be the next dominant American female fighter. But beating Hernandez will not be an easy task even for the extremely talented Mayer.

Carolyn Redmond (3-0) beat Karina Rodriguez (3-2) by technical knockout in the fourth round on Friday Feb. 14. The welterweight bout took place at Nova Scotia.

Marie Connan (2-1) was the winner by unanimous decision after six rounds versus Melanie Mercier (2-7-1) on Saturday Feb. 15. The flyweight fight took place at Vendome.

Jessica Schadko (8-0) won by unanimous decision after six rounds against Borislava Goranova (11-62-4) on Saturday Feb. 15. The welterweight bout was held at Bayern. Also, Ema Kozin (19-0-1) knocked out Radana Knezevic (2-7) in the first round of a middleweight fight.

Hee Jung Yuh (23-3) knocked out Kanyanat Chotchun (2-2) in the sixth round on Saturday Feb. 15. The super flyweight match was held in Manila.

Jennifer Han (18-3-1) won by unanimous decision after eight rounds versus Jeri Sitzes (15-11-1) on Saturday Feb. 15. The lightweight bout was held in El Paso.