Daniela Bermudez Proves Too Strong Again in Argentina
Written by: David A. Avila 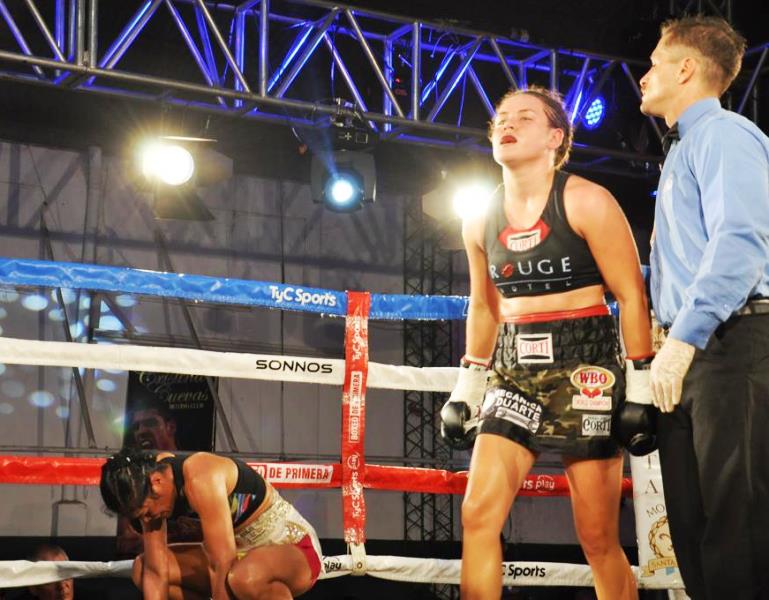 Down Argentine way there’s a bantamweight named Daniela Bermudez and more than a few argue she could be the best female fighter in the world at any weight.

Arguments are mounting as she decisively defeats one after another.

Bermudez (28-3-3) knocked out Alys Sanchez (16-7-1) in the ninth round of their WBO bantamweight world title fight on Friday Feb.28 in Santa Fe, Argentina. It was the fifth defense of the title.

Now 30 year olds, Bermudez has been a professional since March 2010 but it wasn’t a gangbuster start as two of her first four contests ended in a draw. In her second year as a pro she engaged in two pitched battles with rugged Edith Matthysse and she lost once and won by majority decision. Immediately after that she met Argentine standout Yesica “La Tuti” Bopp for the WBA light flyweight world title.

Bermudez lost to Bopp on September 2011 but that experience showed exactly where she stood among the many Argentine female contenders.

On May 2013, Bermudez fought undefeated Neisi Torres for the vacant WBO bantamweight world title and knocked her out in one round. That fight served notice to all potential foes that the “La Bonita” Bermudez had become a very dangerous fighter.

Though she had captured the bantamweight title she maintained the interim super flyweight title for one fight on September 2013. The next January she fought for the WBO super flyweight world title against Linda Laura Lecca and won by knockout in the eighth round. She then dropped down a weight division and challenged Bopp and lost once again in April 2014.

Bopp remains one of Argentina’s best fighters in history. But Bermudez has shown that maybe if they met at bantamweight a different outcome might occur.

Still, it was an attempt to win another weight division against the best. Bermudez returned back to the super flyweight level and won two more fights.

Bermudez biggest gamble came on August 2016 when she traveled to Mexico City to challenge Mariana “Barby” Juarez in a fight that saw both move up to the bantamweight level. The Argentine fighter managed to defeat the mighty Juarez on her own turf. That put Bermudez on the radar for good.

On April 2018, Bermudez then challenged IBF super bantamweight world titlist Marcela Acuna another Argentine legend and defeated her soundly to win a third division world title. Not even Mexico’s Jackie Nava could handle Acuna like Bermudez.

Since that amazing win nearly every boxing publication has established Bermudez on their pound for pound lists. Bermudez has definitely arrived among the upper tier and eagerly awaits more challenges.

WBO super featherweight titlist Ewa Brodnicka (18-0) defends against Djemilla Gontaruk (16-6-2) in a 10 round fight at Dzierzoniow, Poland. This her fourth defense of the title since winning it on April 2018.

The super featherweight division has become one of the most hotly contested divisions in the female fight world. Just recently England’s Terri Harper ripped the WBC title from Finland’s Eva Wahlstrom. Two others Delfine Persoon and Maiva Hamadouche are opting to try out for the Olympics. American contender Mikaela Mayer has a fight coming up on St. Patrick’s Day against veteran fighter Melissa Hernandez. Other talented fighters remain out there like Melissa, St. Vil, Tiara Brown, Helen Joseph, Ronica Jeffrey, and Alycia Baumgardner.

In South Korea, there’s Hyun Mi Choi holding on to the WBA version.

Gabriela Alaniz (7-0) won by technical knockout in the fourth round over Anyelen Espinosa (8-2) on Saturday Feb.29. The flyweight match was held in Buenos Aires.

Daniela Bermudez (28-3-3) knocked out Alys Sanchez (16-7-1) in the ninth round on Friday Feb. 28. The WBO bantamweight world title fight took place at Santa Fe. Bermudez, 30, has defended the title six times and in one of those fights defeated the great Marcela Acuna.

Mailys Gangloff (4-1) knocked out Nana Dokadze (1-5) in the first round on Friday Feb. 28. The bantamweight fight took place at Nice.

On Saturday March 7, super featherweights Ewa Brodnicka (18-0) and Djemilla Gontaruk (16-6-2) meet 10 rounds for the WBO world title at Dzierzoniow. The champion Brodnicka, 35, is making her fourth defense of the title since winning it on April 2018.

Stevi-Ann Levy (2-0) won by decision after four rounds against Gabriella Mezei (10-24-5) on Friday Feb. 28. The super featherweight fight was held in Norfolk.

Schemelle Baldwin (3-1-2) and Sarah Rueda (0-1-1) fought to a draw after four rounds on Saturday Feb. 29. The middleweight fight took place at Hockessin, Delaware.

Marissa Messer (2-0) won by split decision after four rounds against Shawna Ormsby (0-1) on Friday Feb. 28. The flyweight match was held in Worcester, Mass.