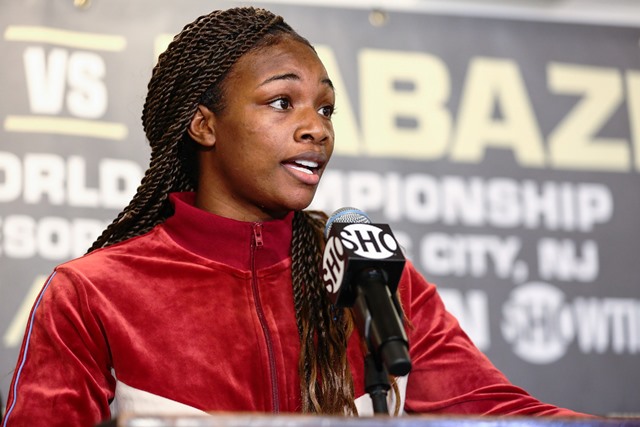 Despite being more than a month away the clash between undefeated super welterweight champions Claressa Shields and Marie Eve Dicaire has been postponed indefinitely said, Salita Promotions on Wednesday.

No new date has been established.

“Unfortunately, the real fight is outside the ring right now,” said Dmitriy Salita, head of Salita Promotions. “Once our invisible opponent is beaten, we can get back to watching two undefeated champions and the two best super welterweights in the world vie for the undisputed world title as Claressa Shields continues to build her incredible legacy in female boxing.”

Much was expected between the two undefeated super welterweights.

Shields, 25, seeks to become an undisputed super welterweight champion in two weight divisions. She already conquered the middleweights with a withering display of dominance when she defeated Germany’s Christina Hammer a year ago. She intended to conquer yet another.

Dicaire, 33, fights out of the Quebec Province and had defended the IBF title three times since wrenching it away from Chris Namus on December 2018. She had defeated Mikaela Lauren, Maria Lindberg and Ogleidis Suarez in succession in bouts held in Canada.

This fight was to take place in Shields hometown Flint where she learned how to box and began displaying the fistic talents that rocketed her to stardom first as a two-time Olympic gold medalist, and then as a professional winning world titles in three weight divisions faster than any fighter in history. That includes men too.

Prizefighting throughout the world has been put on hold so it was no surprise. No one knows exactly when the sports world or the world in general will return to normal circumstances.

Salita Promotions made this announcement in a statement:

Ticket holders for the May 9 event can simply use their tickets in hand from Ticketmaster or the box office for the to-be-announced rescheduled date.  Alternatively, ticketholders can receive a refund through Ticketmaster or in-person at the Dort Federal Credit Union Event Center box office.

Salita Promotions optimistically hopes the fight will be re-scheduled sometime in the supper and will be shown on Showtime. Most of the female fight world looked forward to watching this battle between champions.