Out of the Past: Elizabeth Quevedo Parr Pt. 2
Written by: David A. Avila 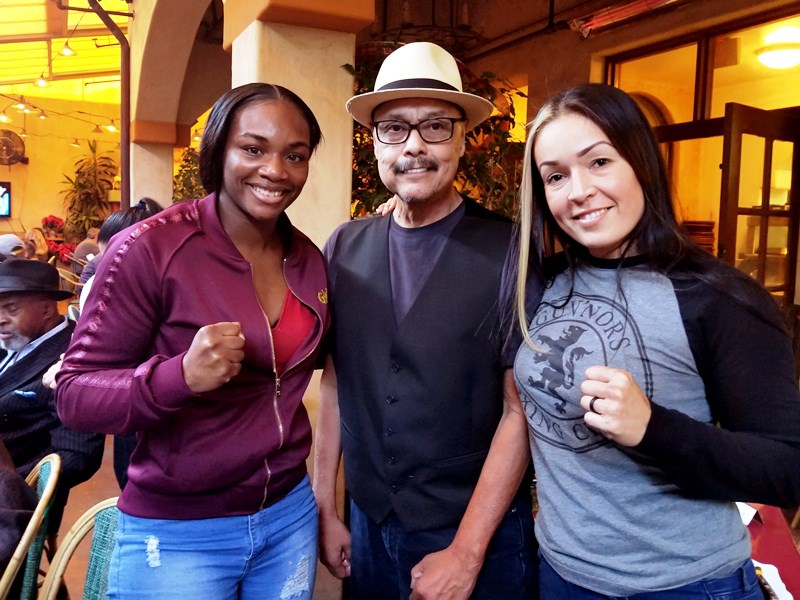 The feats of Elizabeth Quevedo Parr inside a boxing ring where legendary. She was a complete fighter with extraordinary power, speed and skills. But she fought in an era where female boxing was not appreciated.

Most of the female boxing public was not aware of Quevedo’s feats or prowess. But for those few who saw her perform, they all remember that fire, purpose and refusal to allow an opponent to breathe freely. She could box, defend or destroy.

“She’s the best I’ve ever seen,” said one boxing trainer. “I’ve seen them all.”

One journalist described her style as an Alexis Arguello-type fighter who did not waste punches and was deadly accurate. Quevedo had one-punch stopping power like a 12-gauge shotgun at close range.

When Quevedo decided to finally try professional boxing she did not have a trainer. A New York friend advised she visit the Wild Card Gym in Hollywood where Freddie Roach built his fame as a boxing guru.

“I didn’t really watch boxing. I didn’t have internet. My friend Anna said why don’t you ask Freddie Roach. I asked if he trained Lucia Rijker? She said you should just go over there. I had trained with Robert Luna for so long it was foreign for me to ask anybody else to train me,” Quevedo said adding that she did not know anything about Roach.

For weeks Quevedo worked out in the Wild Card on her own and though it’s hard to not notice a tall, stunning brunette with great boxing form, nobody approached her.

One day I ventured into the Wild Card on one of my visits and saw Quevedo working out so I walked over and chatted a bit. Then I walked to Freddie Roach and he quickly asked me about Quevedo. I told him she won four or five consecutive national titles. In mid-sentence Roach left me and walked over to Quevedo with a pair of mitts and put her to the test.

“I told him I want you to train me. Everybody told me to ask you. I didn’t know who I was talking to. He said I’ll see you tomorrow when you come,” said Quevedo.

That lust for boxing has always been strong in Quevedo. She embraces it fully like all the truly great fighters. Week after week she practiced her art at the Wild Card without saying much.

“You know me, I don’t talk a lot,” said Quevedo. “I’m not exactly super friendly. I never went out of my way to be friends with people.”

After weeks of training Roach approached after one particular session and asked about her plans.

During this time it was near impossible to find promoters willing to stage female prize fights. They all said nobody likes women’s boxing though they could never prove it. Mexico had banned female boxing but when they lifted the ban it suddenly became more popular than men’s boxing in that country. Even today female fights are main events in Mexico.

A fighter like Quevedo was avoided at all cost.

Roach asked a friend to help get Quevedo a fight. He tried.

“That’s when I met Steven Feder. He said I don’t typically manage girls but I will help you get some fights,” said Quevedo.

On May 24, 2007, with Roach and famed cut man Joe Chavez walking alongside, Quevedo walked into the boxing ring at the Irvine Marriott Hotel to make her professional debut.

When Elizabeth Quevedo Parr headed down the long corridor with her team alongside she marched toward the boxing ring with a look of a vindictive general about to slaughter the opposition.

Anger was not visible but she had this look of determination that you might expect of a commander in charge of an execution.

On the other corner was a fighter of almost similar height and physical proportions. When the first bell rang the two female combatants exchanged briskly with little feeling out. Quevedo was deadly accurate with the left jab and right cross.

The other fighter hailed from Fresno and was determined to keep pace with Quevedo. Just the fact that she accepted the fight against the four-time amateur National Champion showed grit enough. She could fight too.

“I could tell she didn’t have a lot of amateur experience. But did know she was tough. They had to stop the fight because I believe I scored an overhand right that split her eyebrow. They had to stop the fight. It was a four round fight but they let her finish the round. The referee went over and said hell no,” said Quevedo of the technical knockout win over Danielle Christiansen. “I loved it. It was a really fun fight. I remember it was a great fight for me. It was a great experience for me. I loved that the gloves were so small, except the pay. I think it was a grand or something.”

Though Quevedo suffered a broken hand during the fight she was overjoyed and positive about the future. She barely mentioned the injury.

“Hell yeah I thought it was just the beginning. I did have an injury to my hand that was pretty severe,” said Quevedo Parr. “For a year and a half, no fights. I couldn’t punch. I had to heal and it hurt a lot. I had to wait until my hand healed up.”

After finally healing her right hand, she could not find a fight anywhere.

Quevedo never stopped training and remained a fixture at the Wild Card Gym in Hollywood, California. But finding an opponent was like searching for the Holy Grail. It became an impossible mission with no certain future.

“One day, I was training, and after it was over, Freddie came to me and sat next to me; he was just like “what are you doing?” And I was just like, I don’t even know any more. He was just like, “nobody is going to fight you Liz.” I mean, it was just like that. It’s so hard, I even get emotional now. I knew he was right. I was just like, fuck man. I’ve been doing this for so long, I can’t keep chasing and chasing. For what? I don’t know promotional stuff, I don’t know that stuff. I’m just a fighter. I just want to fight. And if I can’t do that, then I’m not just going to wear stupid outfits, I can’t do stuff like that. I just can’t. It’s not my thing. I don’t kiss ass. I’m not going to go around to different promoters, I don’t do that.

“I thought you put in all that work in the amateurs so that people would know you. This person has been number one for like four years and now they are looking to go into the pros. I thought that people were going to approach me. But after that, I was like this world is not for me. I love boxing and honestly it’s my world, but I’m not going to kiss ass for it. How much more could I have given it? Really?”

Quevedo retired for good. She was 25.

There was one brief moment when she pondered fighting again but the same old problem raised its head again-who would fight her?

Quevedo never hung out with other women but was in her zone whenever she was among fighters. That was her world.

When she was 28 years old she visited Las Vegas and a certain boxing trainer considered an expert in evaluating female fighters asked that she stop by. Quevedo consented and waited patiently for the trainer to finish working with two top female contenders in his makeshift gym.

Quevedo had not put on gloves in over a year and had not performed any physical training. For 30 minutes this trainer put her through his boxing regimen including hitting a single padded glove with force.

After Quevedo finished he pointed her to a room inside the house where she could clean up and change clothing. Then he looked at me with a dead stare and said: “Papa, I thought you were exaggerating when you told me about her. She’s the best fighter I’ve ever seen. She has everything: speed, power, technique. Why doesn’t someone sign her?”

It was the same old problem.

Quevedo was quite familiar with the problem and recognized it was not just her alone suffering but other talented female fighters as well.

“Melinda Cooper is a perfect example. Only those of us in the boxing world know who she is. She was probably in the same kind of category as I was,” said Quevedo. “There were so many of us that were so good. There were girls that were amazing that honestly got lost in the shuffle. Because there was nothing waiting for them at all. No finish line.”

Quevedo began delving into the personal instructor workout field, first in downtown Los Angeles and then in the Long Beach area. After becoming one of the more popular boxing teachers in a boxing workout studio she realized she could start her own.

In 2018, Quevedo and her husband Yas Parr found a two-story building that needed a lot of work and proceeded to renovate the old building and shape it into a modern workout facility with massive space that included boxing equipment and a vast array of free weights and modern workout apparatus. They named their workout gym Guvnors Boxing Club and they accommodate all ages, both amateur and professional boxers and non-boxers.

It’s been a dream-come-true for Quevedo Parr, who worked feverishly to do most of the refinishing and construction for the gym. Now, with the Corona virus quarantine, things have changed but she and her husband still have courses online on Instagram.

“I love what I do,” said Quevedo Parr.

Anyone, anywhere can join the program designed and taught by the husband and wife team of Liz and Yas Parr.

In the Southern California area Quevedo Parr has become a popular trainer and ambassador for combat sports. It’s only natural.

During her prime Quevedo Parr showed remarkable fighting skills and blazed a path for all female fighters. She was the best female fighter I’ve ever seen until now.

Recently, an impromptu press conference was held at El Cholos Restaurant in downtown Los Angeles for budding super star Claressa Shields. For many years I had not encountered another fighter as talented as Quevedo, until I saw Shields flash those lightning combinations against Femke Hermans a year ago.

Coincidentally, as Shields spoke to the press at one of the tables of the downtown Los Angeles restaurant, across the room sitting at a bar stool was Quevedo. A photographer who recognized Quevedo asked that we pose together and all three of us were photographed.

It was like passing the torch as Shields and Quevedo posed for a photo with me at El Cholos. What might have been if Quevedo was still fighting professionally?

Editor’s note: Guvnors still operates a daily workout session online. Anyone interested in signing up for the workouts can do so for a $5 donation by first going to VENMO: guvnorsboxingclub or to PAYPAL: guvnorsboxingclub@gmail.com