Hanna Gabriels and Rise to Championship Boxing and More
Written by: Felipe Leon 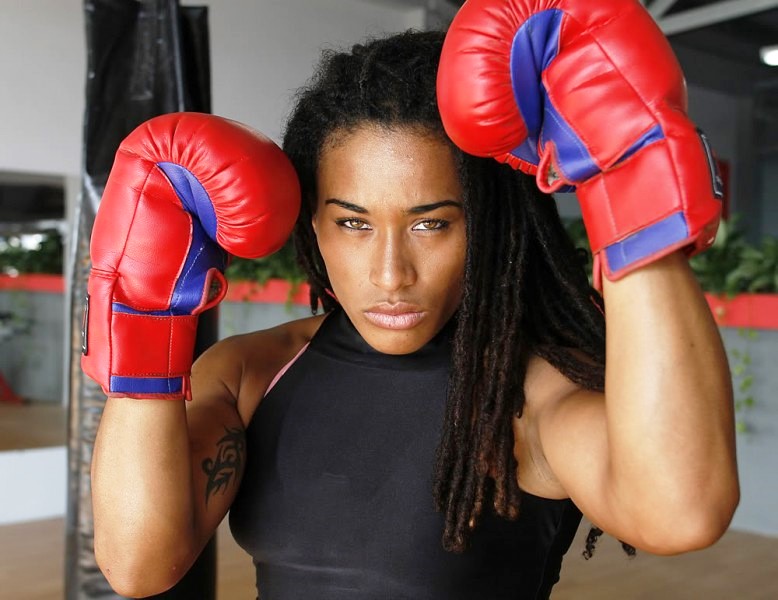 For some fighters, their biggest battles are not fought in a boxing ring.  That is the case for current WBA super welterweight champion Hanna Gabriels (20-2-1, 11KO) of Costa Rica.  The 37-year-old mother of one survived sexual abuse early in her life to make her a champion inside and outside the ring.

“Sports was my safe place, I had been sexually abused when I was five years old,” Gabriels shared recently in an exclusive interview with the 2Min Round, the all-female boxing podcast.  “At that time it was also when my parents took me to a competition in track and field and I found my peace, I found a safe place there.”

Gabriels dedicated her life from that young age to track and field until her mid-teens when she suffered a career-ending injury.

“At nine years old I was able to get on a track and field team,” she explained.  “I did everything.  I was strong, I was fast, I had abilities, I was doing everything, from the decathlon to the individual tests.  I would run 100 meters, 100-meter hurdles, 400 meters, 400-meter hurdles; I would do everything that was in the field, from shot put to disc to javelin.  The long jump, the high jump, I would do pretty much everything.”

At seventeen she suffered an injury to her back that forced her to end her career as a track and field athlete, however that led her to the boxing gym.

“It is kind of crazy because I got involved with boxing to lose some weight,” Gabriels reminisced.  “I never planned to box.  According to the doctor that saw me when I was 17 years old, he said I wasn’t going to be able to do sports again.   I went into depression and gained a lot of weight.  I was around 206 pounds and my dad advised me to go to the boxing gym, he used to box as well.”

For about four years I was in-and-out, not really interested in doing much because of what the doctor told me, I actually believed it.” she continued.  “My depression, I hit bottom, I started to see suicide as an option.  I decided to do everything I could and do it with excellence to see where that excellence could take me in boxing and here we are.”

Where we are is with one of the best super welterweights in the moment.  Without much of an amateur career to speak of, the ultra-popular champion in Costa Rica learned on the job, as she turned pro in the fall of 2007.  Two years later she captured her first world title, the WBO 154-pound title, with a 4th round knockout of Gabriela Zapata.

Less than a year later she captured the same title again with a first round stoppage of Gardy Peña and defended the strap three times before suffering her first loss in early ’13 against Oxandia Castillo.  In her next fight, a year and a half later, she captured the title for the third time with a second round TKO over Patty Ramirez.  In June of 2016 she unified the title with the WBA version with a third round stoppage of Katia Alvarino. She was able to avenge her loss to Castillo in late 2017, defeating her with a unanimous decision.

Her success inside the boxing ring has made her an icon in her native Costa Rica, appearing in her country’s national stadium as the main event.

“It is always fun, I am very lucky,” she stated of her fame. “Every time I go out it is kind of difficult.  The moment I step out of my house I am no longer mine, I am of the people, that way you avoid feeling overwhelmed when people don’t allow you to eat or if my daughter wants to go to the mall, I can’t take her, because people won’t let me go into the second floor until I give an hour of autographs.  People are great, I am always honored and I know someday this will pass.  Someday I will not be relevant, I will be a memory and that is ok.  So I am not mad at the situation.”

Obviously her career at the moment is at a standstill because of the Covid-19 pandemic sweeping across the world.  Relatively the numbers in her native country of Costa Rica are small compared to the rest of the world but according to Gabriels they are experiencing a bit of a spike.

“It was handled pretty good in the beginning but I always believed that when the responsibility is collective, then you can’t really expect a lot,” she said.  “Everybody is a different world, everybody would like to believe it will never harm them or it will never affect them.”

“So right now we had the biggest amount of cases of Covid-19 and we are all worried,” she continued. “We also trust that our health system will be able to handle it.  We have a great team in the government and they have been doing a hell of a job.  I just hope the people are willing to listen and follow the instructions the health administration have instructed to do.”

Despite the shut down, Gabriels continues to train as best she can with what she has at hand.  “I have a boxing gym here for the people and I live near the mountains so I am pretty far from everything.  We have a big property with a lot of green so I train here.  Sometimes I go down to the gym but because of the amount of cases that they have going up, we had to stop.”

In one of the most anticipated recent female fights, Gabriels dropped her second loss in her pro career to the current unified super welterweight champion Claressa Shields.  The fight, held in the summer of 2018, was for Shields’ unified crown at 160 pounds, six pounds above Gabriels’ ideal weight.

“If she wants to be undisputed at 154-pounds, she has to face me,” Gabriels said of Shields, who she has engaged with in an aggressive war of words recently on social media.  “This is my division.  I expected for her to be a lot stronger (in their first fight) and I came to find out, not really.  I am excited to see what is going to happen in my division this time around with great conditioning.  I can’t wait, I am so excited.”

During the first round of their fight, Gabriels landed a hard right uppercut followed by a left hook to the top of Shields’ head that sent the defending champion to the canvas, the first and only time Shields has tasted the canvas in her career.

“I didn’t think I had the power to send her down because she was the bigger girl and was in higher divisions,” she said of the knockdown.  “When it comes to knockdowns and knockouts, strength has something to do with it but not all.  It is about placing the punch and timing.  154 pounds is where I feel comfortable and knowing what her power is and knowing that I am in the division where I am stronger, quicker and everything, I would do a better job.”

“Last fight was an emotional fight for me,” she explained.  “She said so many things and talked so much thrash, I really wanted her to know I wasn’t afraid of her.  I wanted to go in there and go all over her.  I wasn’t able to hear much from my corner because I just wanted to do my thing so I wasn’t listening to my corner and that was my mistake.”

Another name linked to Gabriels is up-and-coming Raquel Miller of San Francisco, CA.  “Pretty Beast” as she is known, currently holds the interim WBA 154-pound title that puts her in the hemisphere of Gabriels. “I told her I would fight her.  I sustained an injury of last year and I am recovering but I am training every day and I feel great.  She got mad at me the other day because as you know when a fighter gets out of an injury, they usually have a tune-up fight first so I told her she could be my tune-up fight.  I’m not being disrespectful saying her level is not what it should be, she is ranked, but if I have to fight her first, then she would be my tune-up fight and I’ll be ready.”

Another battle Gabriels has undertaken is the fight for the three-minute round to be the norm for women’s boxing.  Recently during an online conversation during the virtual WBA annual convention,  Gabriels moderated a discussion regarding the subject that included herself as well as Claressa Shields and the interim WBA flyweight champion Seniesa Estrada who all advocate for the change.

“In two minutes you are not able to do anything, there is not enough time, it passes too quick,” Gabriels said of the current rule.  “Everything is in a rush.  People talk about medical arguments but we all train longer, I train five minute rounds then go to four, then three, and then just to get used to the speed I go to two when the fight is close.”

“I think we need the three minutes to get more knockouts,” she continued.  “More excitement in the ring, better work with the strategies.  Luckily when we were having that conversation, the president of the WBA Gilberto Mendoza said the WBA is already allowing the three-minute round, we just need to ask for it.  Claressa said she wants three-minute rounds so when we get to that fight I am for sure asking for that and I know she would do it.”

During the conversation, Gabriels and Shields came to the agreement they would be willing to sacrifice the belts of the sanctioning bodies that do not support the three-minute rounds.  “I think it is the time for us women to raise our voice for what we want to happen in the ring for us.  For the longest time it has been men deciding how we should fight, what amount of time we should fight, how many rounds we should fight and that has to change.”