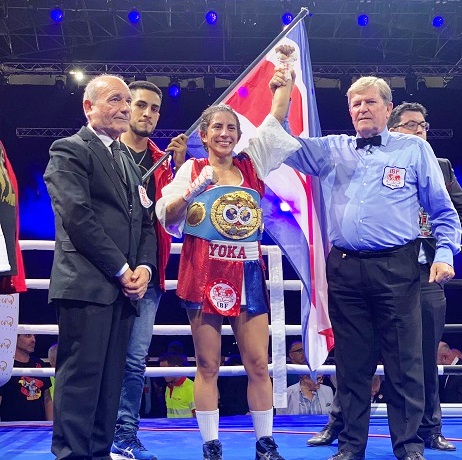 For many if not all boxers born outside of the United States, the dream to fight in that country is a vivid one.  The promise of a purse containing dollars, more likely the biggest of their career, and the exposure from fighting in one of the most important stages for boxing in the world is a strong motivator.  That is the case for current IBF 105-pound champion Yokasta Valle (20-2, 9KO) of Costa Rica.

In 22 bouts as a professional, Valle has stamped her passport in such foreign lands as Japan, Germany and Spain but she has the United States of America firmly in her sights. One way to stamp her ticket north is to defend her world title against none other than East Los Angeles’ Seniesa Estrada who has stated she is looking for a title run in the minimumweight division.

“I would say to her she is wasting her time looking for a fight against Anabel Ortiz,” Valle said confidently in an exclusive interview on the 2-Min Round Podcast.  Estrada has publicly stated she would like to challenge Ortiz, the WBA 105-pound world champion, soon. “Who knows when Ortiz would accept the fight.  If I get that fight offer today, tomorrow I sign the contract so we can have the fight signed, sealed and delivered.”

Mario Vega, Valle’s promoter for the last 10 years in Costa Rica, doesn’t necessarily believe the Valle vs Estrada fight needs to be on American soil for it to happen.

“I think, and I can dream, we can do that fight here in Costa Rica, get 30,000 people in the National Stadium,” he said in the same interview via telephone from the Central American country.  “We work very hard and we have everything here to do it.  We have a country behind us.”

After an appearance a couple of years ago on Costa Rica’s version of “Dancing with the Stars”, the 27-year-old Valle has become a darling of her home country.  Her last two fights have been broadcast live nationally with increasing numbers.  Her last fight back in February where she defended her world title for the first time, an average of 450,000 viewers tuned in to the fight.

The young girl who first went to a boxing gym at the prompting of her father could have never dreamed her life now.

“I began because of my dad,” Valle explained of how she started in boxing.  “He is the one that took me to the gym at 13.  Two or three weeks later, I wasn’t really into it, but after I had my first fight that is when I fell in love with the sport.”

She continued to hone her craft attributing the discipline she learned from her father as one of her biggest weapons.

She is disciplined, her trainer says she is like soldier, she never tells her trainer no,” Vega said.  “Everything she is told; she does without hesitating or asking why.  She is a hard-working girl.”

“Her dad was a body builder,” Vega continued.  “He was very disciplined.  He coached her in that sense, when she was growing up her dad didn’t eat what everybody else was eating because he had to watch his weight.  She learned from her dad.”

At 22, Valle went pro winning her first 13 fights.  In late 2016 she captured the vacant IBF atom weight title with a split decision over Mexico’s Ana Victoria Polo. Two fights later in December of 2017 Valle found herself in Japan face-to-face with Naoko Fujioka, long considered the best female Japanese fighter of all time.

“Yokasta never hesitated,” Vega said of his fighter when he offered her the fight in Japan.  “Fujioka at the press conference said what she noticed of Yokasta is she had no fear.  She is willing to fight the best and as a promoter to have an athlete like that it is the best.  The only thing that is difficult is to promote female boxing.”

Six months later Valle found herself across the world in Germany challenging for the WBC 105-pound title against local Tina Rupprecht.  After ten hotly contested rounds, Valle found herself on the losing end of a very controversial unanimous decision in a fight she and her team feel she clearly won.

She gave Tina Rupprecht a beating but it is very difficult to win in Germany,” Vega said.  “She (Rupprecht) never leaves Germany. We felt Valle won.  The cards were crazy. Even the last round, for example, all the judges scored 10-10 on all three cards.  We felt that if you are getting paid to be a judge, you should make a decision.  We felt that was crazy.”

Valle’s only two losses as a professional came consecutively, but despite it, claims she wasn’t affected by it, she went back to what she knows will help her get better in the long run – work in the gym.

“No, I wasn’t affected,” she said of her mentality after her two losses.  “In fact it motivated me even more.  After the first loss once I got back to Costa Rica, I rested for about two or three days and then I started to train once again.

Two months later Valle was back in the ring and in the wining column with a stoppage of Haydee Zapa in two rounds.  She has not lost in seven straight fights.  Last summer she scored the biggest win of her career traveling once again to Europe, this time to Spain, to challenge the then IBF minimumweight world champion Joanna Pastrana.  Valle scored a razor-thin split decision to win her second world title in as many divisions.

“The last one in Spain where I won the world title has been my biggest win,” Valle said.  “It is very difficult to fight abroad and win a title, beat the world champion, with everything against me.  That is one of my biggest achievements as well as bringing home the world title to Costa Rica.”

Valle still had her doubts once the final bell rang, the memory of Germany still ringing inside her head.

“I was nervous in Spain when the cards were being read because the same thing that happened in Germany could have happened.  I was nervous,” she admitted.  “After going to Japan, a fight I took despite not having a lot of experience and going up two divisions and then Germany, same thing, I won the fight but I feel that I had to push more, not box as much but be more aggressive.  Once we went to Spain, I felt the third time was the charm, I trained like never before.  We didn’t want a repeat of Germany. We didn’t want to leave anything in the hands of the judges.”

With the whole world in the middle of a pandemic, Costa Rica is no different. Although the virus has been contained for the most part with the small Central American country registering very low numbers, no events have been scheduled.  Vega hopes things can change in the near future planning for Valle’s return in late October.

If it was up to Valle, who says she sees herself topping off at the 112-pound division before the end of her career, her next fight would be against the other world champions of her division or against any other world-class opponent.

“I want to fight the champions of my division,” she said confidently.  “Etsuko Tada of Japan, the Mexican Anabel Ortiz of the WBA and Tina Rupprecht of Germany of the WBC.  Anybody because it has been six months since my last fight.  I am ready at any time.  I just want to fight with the best so any one of them for me would be perfect.”

To Listen to the complete unedited interview, please visit BlogTalkRadio.com/2MinRound