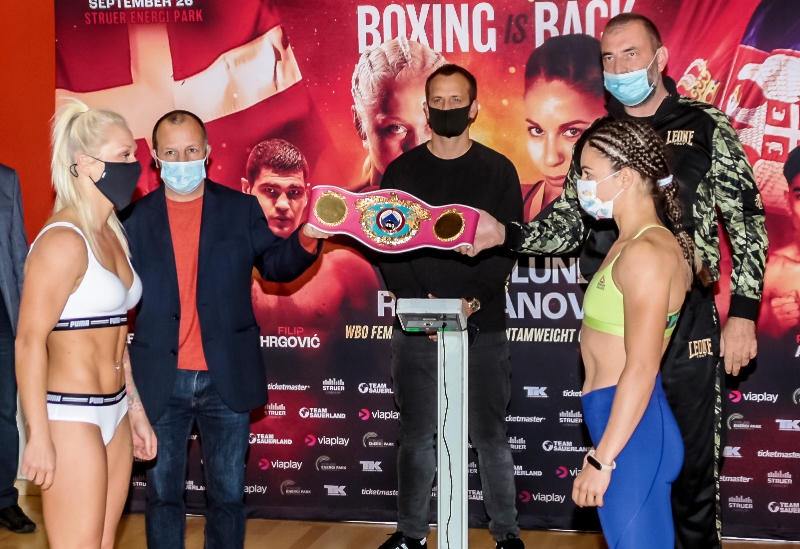 While many fighters, fans, and promoters in the USA are still dealing with strict audience restrictions due to the Covid19 pandemic, more and more countries around the world have begun hosting live fight audiences of varying social distance sizes again.

This will be Thorslund’s third title defense. She has previously held an interim WBC belt.

“I’m really looking forward to boxing again. It’s been over a year since I’ve been in the ring,” Thorslund told the media. “The pandemic put an end to me being able to fight but my motivation hasn’t been affected.”

“Nina is a good opponent who works hard. I expect her to put me under pressure, but she won’t succeed with that. I’ve been training and waiting a long time for this fight, so I expect to be sharper than ever.”

Thorslund’s last fight was over fifteen months ago, a ten round title defense shutout versus April Adams in the nearby city of Horsens. Each of Thorslund’s other matches since 2017 took place in Struer. Each was also blowout, except for a March ’18 rumble against Alicia Ashley.

Its been over a year since Thorslund’s last pro fight but considering her wide range of fitness activities and consistent training lifestyle it will probably only take throwing a punch or two before she’s right back in the groove. Thorslund has sparred with both women and men, including the young pro Michael Nielsen. She has also trained with weights and posted a video of herself successfully deadlifting over 280 pounds.

While it looks like Thorslund’s strength and technique have continued to grow, a KO seems unlikely. The most probable outcome is another wide unanimous decision for the local hero.

Danish media reported that Thorslund had previous promotional issues but she is now back with Team Sauerland. “I’m happy to be working with Sauerland again,” said Thorslund about the situation. “It gives me some peace of mind during the build up to the fight, so I just have to concentrate on boxing.”

Radovanovic is a well-travelled opponent who won’t make anything easy, but how much of a true threat she presents is questionable though she did notch a minor flyweight title against Sanae Jah of Belgium, who was 15-2 when they met in Brussels in 2018.

Radovanovic lost her next, most recent bout, a ten round decision against Poland’s Ewelina Pekalska in June ’19, the same month as Thorslund’s last appearance. Pekalska was only 3-0 at the time.

In 2016, Radovanovic was stopped in three rounds by Ibeth Zamora Silva, 26-5, in Mexico. That’s no disgrace. The fight was for the WBC Light Flyweight Championship and Zamora – Silva had already faced plenty of tough women by then. It showed Radovanovic’s courage more than anything else. She was only 9-0 then and fight crowds in places like Torreon aren’t always the most welcoming toward European challengers.

In her previous bouts, Radovanovic has employed a wide stance and stayed on her toes outside opponents’ reach, then darted in with awkward combinations. Her best asset appears to be the ability to throw quick counters from unusual angles.

The ladies share very similar body types and each stays busy on offense. Considering Thorslund’s typical aggression and Radovanovic’s general willingness to trade punches, there’s plenty of potential for toe to toe action. If the fighters’ previous form is any indication, there are also likely to be more than a few clinches.

Whether they fight from the inside or outside Thorslund must be considered an overwhelming favorite, but she’s been cut before and all it takes is one intangible like that to change everything.

“I’m very excited to face Dina,“ said Radovanovic. “I’ve watched a few of Dina’s fights and it seems we have a similar temperament, I think it will be a pleasing fight for the audience. Fighting in my opponent’s country is nothing new to me, I’ve got a lot of experience from exceptional title fights and I’ll use that to my advantage. I believe the Danish fans are in for a surprise.”

The venue’s fight night capacity is uncertain, but previous shows indicate room for hundreds of fans under a recommended social distance of around six feet. A check of ticket outlets a week before the fight spells an early sell out. It’s a sign of Thorslund’s popularity that she’s getting top billing on a card that includes global heavyweight prospect Filip Hrgovic.

Right now, Thorslund’s future comes down to how comfortable she is with her current circumstances. On one hand, she’s worked very hard to earn stardom in her homeland, status she can probably maintain for quite a while.

There also could be more lucrative opportunities outside Denmark, but that would likely involve moving to a heavier weight division and far more dangerous territory.

Nordic countries are known for their fishing prowess, and in a way this is a big fish-big pond scenario.