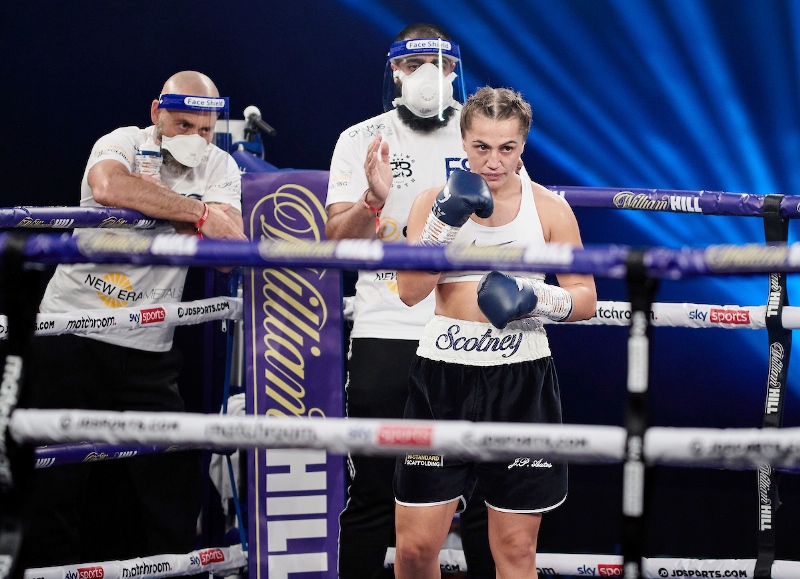 Scotney signed a long-term contract with Matchroom Boxing and should benefit with the international exposure the England-based outfit can provide. Her solid win over veteran Bec Connolly was shown on DAZN and Sky Sports throughout the world.

Watching the featherweight from London reminded me of another who actually fought in America. The movements, skill, speed and aggressiveness were reminiscent of Las Vegas speedster Melinda “La Maravilla” Cooper. Boy, could she fight.

Until I saw Scotney last Saturday on the Matchroom card from England, I had not seen another fighter at that weight class or lower display those same kind of movements Cooper used to showcase in her blistering wins all over the world.

That brings me to a point: will Scotney ever fight someone in America?

Too bad Cooper no longer fights. She would have fit right in with her speedy combinations and sizzling power shots. Plus, she lives in Las Vegas.

So far only the great Katie Taylor has fought on American shores and that proved instrumental in attracting subscribers to DAZN USA which streams Matchroom Boxing’s cards. Though the talented Irish fighter hasn’t become a household name in the U.S.A. those who love boxing know Taylor.

Golden Boy Promotions, based in Los Angeles, also has a number of female fighters on its roster including Seniesa “Super Bad” Estrada one of the most dangerous and talented fighters in the world without a world title. It’s not the light flyweights fault she doesn’t have one of the major titles. Though highly ranked the world champions in her weight class are not accepting her challenge.

Among the other fighters with Golden Boy are Marlen Esparza and Sulem Urbina who are set to meet on Friday Oct. 30, at Fantasy Springs Casino in Indio, California. DAZN will stream the flyweight clash between former Olympians. They also have WBC super middleweight champion Franchon Crews-Dezurn.

DAZN remains the only network showing more than one female fighter on its boxing cards. ESPN has Mikaela Mayer who fights on October 31 in Las Vegas against WBO super featherweight world titlist. Recently, the American based network added Canadian boxer Kim Clavel to a boxing card. Or was it Top Rank the Las Vegas company that has Mayer under contract. ESPN needs to invest in female boxing.

Showtime has not announced any current alliances with female boxing but rumors are emerging that a new player has arrived that is interested in televising or streaming female boxing.

Who could say no?

Female prizefighting will someday rival men’s boxing. I guarantee it.

Women already have  million dollar fighter in Katie Taylor who made more than that amount in her last fight.

Many said it could not be done. Well it’s been done…twice.

Ema Kozin (20-0-1) defeated Chris Namus (25-6) by unanimous decision after 10 rounds on Saturday October 17. The WBC interim middleweight title fight took place at Bayern. Also, Katelynn Phelan (4-0) stopped Jessica Schadko (8-1) in the fifth round of their welterweight bout. Plus, Felicitas Vogt (5-0) knocked out Zorana Jakovlevic (0-4) in the first round of their bantamweight match.

Mea Motu (1-0) beat Wendy Talbot (0-6) by decision after four rounds on Saturday Oct. 17. The lightweight bout was held at Auckland.

Ellen Simwaka (8-5-2) won by technical knockout in the third round versus Melissa Miller (5-9-3) on Saturday Oct. 17. The super bantamweight fight was held at Soweto.

Ellie Scotney (1-0) won by unanimous decision after six rounds versus Bec Connolly (3-8) on Saturday Oct. 17. The featherweight bout took place at Peterborough, England. The main bout between Savannah Marshall and Hannah Rankin was postponed due to a positive Covid-19 test for Marshall’s trainer.