Boxing Newcomer Out of the Catskills: Fei Faiva
Written by: Felipe Leon 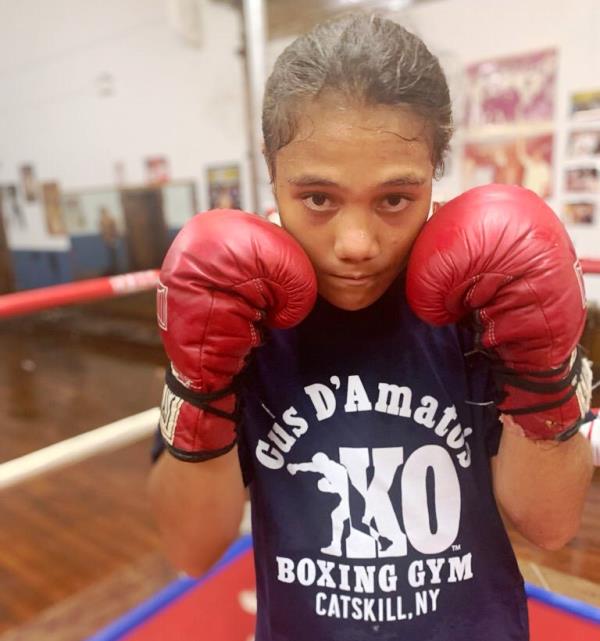 Professional boxing is synonymous with sacrifice.  From the physical aspect, the early morning runs, the hours at the gym, the diet, all of it is a commitment many are not willing to make.  When pursuing your dreams there is also other sacrifices, like moving away from your hometown and not seeing your family for long periods of time.

“I came out here so I can start boxing,” Fei, as she is known, stated recently.  “I originally moved to the state of Arkansas when I first came to America.  Now I am in Catskill, we came here to train at the Cus D’Amato’s KO Boxing gym, I have been here since I was 13.”

Faiva traveled from her native islands to the mainland with an older sister leaving the rest of her family behind.  “I have not seen my parents in nine years.  I message them but I have not seen them.”

Cus D’Amato was a world renown boxing manager and trainer best known for his work with “Iron” Mike Tyson in the 70’s and early 80’s.  Known for a unique style of training, Mike Tyson being its best example of it combining speed and power with a unique defensive style, D’Amato is respected and admired in all boxing circles.

“My sister introduced me to the sport,” Faiva said of her interest in boxing.  “She was a fighter as well but she never got to either fight amateur or pro.  She started back on the island.  I remember tagging along with my parents because we would all go together with her to the gym.  I was very young. I was probably seven or six.”

Once they reached the states, Faiva began learning the sport while living in Memphis, Tennessee.  “I was 12 years old.  I’m the type of person once I start something I finish it through.  That is the reason I have stuck with it.  I enjoy the art of boxing.  I also enjoy hitting people.”

Faiva mentions none other than Mike Tyson as her favorite fighter admiring his style, “the way he punches off his movement.  His punching technique and his aggressiveness. His effective aggressiveness I should say.  Those are all the qualities I like about him.”

As a matter of fact, Faiva, who they call “Lady Tyson”, sees similarities in their style.

“I see my style identical with Mike’s style,” she explained.  “I look for power, I look to knock out my opponent in the ring.”

Fei only had thirteen amateur fights despite embarking into boxing at an early age.  She mentions a lack of opportunity as the reason of such a small number of fights.  In spite of the lack of experience, she shows a professional style which incorporates the unmistakable Peek-A-Boo style perfected by Cus D’Amato.

She is co-trained by Darren Ruff and George Young while managed by Kyle Lyles.

“When I first moved to Catskill we came to the gym,” Faiva said of how she ended up with her team. “We were looking for a trainer to train me.  That is how I came across George Young. Later on Darren Ruff came into the picture.”

Faiva made her pro debut in late September of this year against Jaica Pavilus in Miami, Florida.  Fei pitched a shutout over four rounds with scores of 40-36 three times.

“I felt more comfortable without the headgear,” she said of her first pro fight.  “Having smaller gloves, it made me feel I would have a better chance of hitting this person with harder punches.  I was looking for the knockout but I was surprised she made it to the end of the fight.”

Her manager Kyle Lyles has kept Faiva busy with three fights in the span of a month and a half.  Faiva stopped her two next opponents, Camile Casson and Myasia Oglesby, in the first round. As of now, she has her next fight scheduled this weekend in Florida and another in December.

“The changes I made from my first pro fight to my second was going right after my opponent,” she said of the strategy which delivered her the first knockout of her pro career.  “Putting accurate punches together and attacking to the body first then to the head.”

Despite her young age, Faiva has set her eye on some lofty goals sooner than later for her boxing career.

“My goal is by a year and a half of being a pro I want to become a world champion,” Faiva said confidently.  “I will go down to 126 pounds and claim a title, any of them.”

Faiva is scheduled to fight Brittney Artis on Friday Nov. 20, at the Ocean Center in Daytona Beach, Florida.