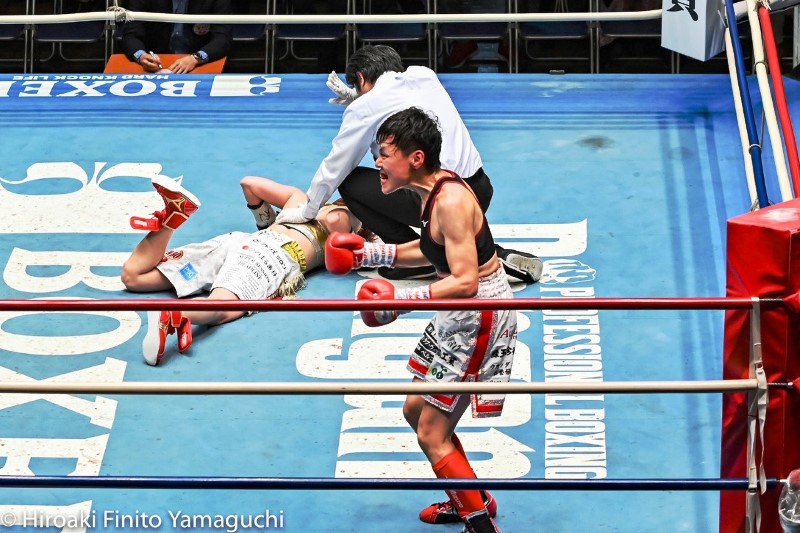 But in their second fight, the tall southpaw Tada was leading the quality contest until delivering a short left cross that collapsed Miyao and left her face-first on the canvas. The referee stopped counting when he saw she could not get up at eight seconds of the ninth round.

It was a brilliant one punch finish, very rare in lighter weight female fights and it aroused thunderous handclaps from the limited audience who were prohibited from shouting by JBC Japan Boxing Commission and the national health authority because of safety measures for COVID-19.

Eleven months ago, they opposed each other in a very cautious affair to end up in a split draw for the same title which was vacated by Kasumi Saeki, Tada’s stable mate, in the same venue on January 28th.

Tada and Miyao talked to the media first time from the last fight in online meetings respectively after the weigh in on December 2nd.

During the interview Tada confessed that back in January she could not feel her right leg as she had been suffering pulled muscles of the upper thigh since before the first fight was offered. She took the fight and the injury got worse through the 10 rounds and left her inactive long afterward. During rehabilitation Tada turned 39 years old in May and still refused the idea of retirement from boxing.

“I do not want to give up my dream to win all four major world titles at minimumweight that nobody has made yet. I’ve not got the WBC title yet,” Tada said.

While the unusual pandemic situation has attacked the economy, her supporters and sponsors encouraged her to keep going in boxing. “I cannot thank enough to people who support me when they all also suffer in the difficult time.”  When she made up her mind to keep fighting in September, she got the rematch offer from team Miyao.

Team Miyao was working on having her fight in Vietnam this past summer, but they found it impossible to make it in the pandemic. They changed the plan and decided to fight Tada again.

“I have been training somehow even when the gym was closed. I did not skip a day. It was weird that I was training for the fight which could be on or off anytime on the way.” She finally got a certain target when the rematch with Tada was scheduled, though, she had a tough time to prepare for the lanky southpaw. “I could not find any tall lefty girls to spar with as it was strictly limited inviting sparring partners from other stables, also we did not have that type of boxer in our stable. So, to tell the truth, I prepared for this rematch without any sparring. Not at all. But I know how she moves and I know what I have to do. I just focused on drilling myself in the strategy to beat Tada, specifically. I will get inside of her and punch a lot. I am ready.”, Miyao sounded in good spirits in the zoom conference.

From the opening, Miyao worked on her strategy; to stoop low and attack constantly with a right cross to the head and body. That style caused a severe head collision to take a short break, but the former smaller champion kept going forward. Tada tried to stay sound and to find timing for her straight left.

The southpaw Tada hit with a left and followed up with a right hook to stagger the opponent in the fourth round. Miyao fought back with a left hook to Tada’s head in the fifth. Tada figured out how to move to avoid Miyao’s attack and to land her left completely in sixth round.

Tada started dominating the fight when she figured out how to move to avoid Miyao’s punches and the time to land her left in the sixth round. Miyao, who was persistent in attacking, looked tired and seemed off balance. Tada suddenly captured the brave woman with one single punch, a quick left cross, to finish the fight in the ninth.

It could be the knockout of the year.

“Thank you, Miss Miyao, for giving me this opportunity again. I appreciate it.”, the new champion spoke in the post-fight interview after seeing off the rival on a stretcher leaving the ring.

“Has my performance today proved that boxing is not about power but timing? I think I did,” Tada said.

The winner looked totally delighted and proud of course. I don’t exaggerate to say that she is in her peak right now at the age of 39 when looking back over her 20 years of boxing career.

Tada is definitely one of the pioneers of Japanese female boxing. She changed the history. When the first female Asian Championship by AIBA was held in Bangkok, Thailand in August 2001, bantamweight Tada got a bronze medal, that moved Japan Amateur Boxing Federation to start sanctioning female amateur boxing which was an underground sport. She became one of the first professional boxers when JBC Japan Boxing Commission launched licensing female boxers officially in 2008.

Since winning the WBA minimumweight championship, her first world title, in her fifth fight via a decision over ChoRong Son of Korea in April 2009, she defended it nine times until losing to Anabel “Avispa”･Ortiz of Mexico in July 2013. The southpaw has skills to make the most of her height advantage and uses side steps to outbox opponents, but now her movement is more stable on her feet, that can be seen in those fights against fellow world champions; Naoko Shibata (the 2nd encounter between the two) in 2017 and Kayoko Ebata in 2018.

When Tada visited Los Angeles for training last summer, she told me that it was the fruit of a couple of years of strength training focused on core muscles. The density of the skinny body brought her more agility in her steps and more speed and power in her punches. But though she is in her prime, the veteran has been thinking how to finish her career.

“I know I cannot fight forever. The due date will come before long. But my performance today might allow me to keep going to my goal. I have to talk with my manager first, but I definitely want the WBC belt now. I will be the first female champion conquering all four major world titles at minimumweight.”