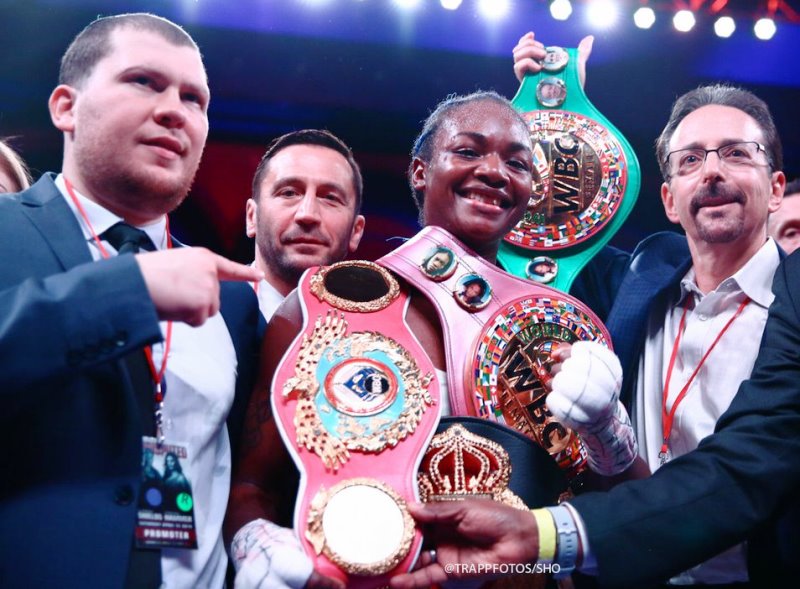 Despite the current world we live in with the Covid-19 pandemic, the show must go on.  For Mark Taffet, former HBO executive and now the co-manager of nine-time world champion Claressa Shields (10-0, 2KO), it has not only been the deadly virus which has nearly put the world on a standstill but other factors as well.

“It has been a really long hard road,” Taffet shared recently in an exclusive interview with the all-female boxing podcast the 2-Min Round.  “I really feel for Claressa because she has been so patient.  She is young, she is 25-years-old, she is hungry, she wants to fight every day if she can and it has been a very, very difficult road.”

Shields has not seen action since January of 2020 when she defeated Ivana Habazin via a dominant ten round unanimous decision for the vacant WBC and WBO super welterweight titles.  The win made Shields of Flint, Michigan, a world champion in her third division having captured titles at 168 and 160 pounds.

Shortly after that bout it was announced Shields would face off against the also undefeated Marie-Eve Dicaire (17-0) of Canada to unify Dicaire’s IBF title but the fight, programmed for May 9th on Showtime, fell to the wayside because of Covid-19.

“We believed we would back with Showtime, they gave us their word, once they got back from Covid,” Taffet explained.  “I think their obligations exceeded their desires and they weren’t able to accommodate us.  We were very, very disappointed, we were shocked, they told us because of other commitments they couldn’t do the show.  It wasn’t a contractual issue; we simply took their word and they couldn’t deliver.”

Taffet doesn’t see Shields and himself returning to the premium network even after boxing and the world opens up after Covid-19.

“I haven’t gotten any commitment from them,” Taffet said of Showtime.  “Quite honestly, I am so disappointed because they are not involved in this fight.  Like I said, it wasn’t a written, signed contractual agreement but for me it was more important than that, it was somebody’s word.  The fact they didn’t deliver on that and live up to that, personally I would do anything that helps Claressa Shields but I don’t want to be some place where people have broken their word to us especially knowing how important it was to us and to Claressa.  I take it very personally.  In this business you shouldn’t take things personally but unfortunately, I do, my heart and soul has always been in everything I have done.”

According to Taffet a deal was almost struck with the UFC to broadcast the championship bout on their UFC Fight Pass network but in his words, it fell apart in the eleventh and a half hour.  Now Taffet along with Shields promotor Dmitry Salita have literally taken the matter into their own hands scheduling “SuperWomen”, an all-female Pay-Per-View fight card, on Friday, March 5th, in Flint, Michigan.

“We have a five-fight all women’s card, I can’t recall a card like this happening in women’s boxing,” Taffet said of the event.  “It is going to be great event.  We have great undercard fights that we are putting together now and will be announced very shortly. We are very proud.  We are going to have a lot of support from men and women in the entertainment industry.”

“We didn’t want to be on PPV, that wasn’t our choice, we make no bones about it,” Taffet explained.  “When you are pushed to the back of the bus and then off the bus and you don’t want to take it laying down, you stand up and you fight.  These women are standing up and fighting.  With them and Dmitry Salita with Dmitry putting his money on the line, we are able to bring these fights to PPV, bring it to the fans and I am proud of all the ladies that are coming on board to help support the cause.”

Featured tentatively on the card will be the interim WBA super welterweight champion Raquel Miller with heavyweight Danielle Perkins is confirmed in a six rounder against Monika Harrison.  Taffet also revealed Nadia Meknouzi, who is trained by Floyd Mayweather Sr, will take on Samantha Pill tentatively for the newly vacated WBO light heavyweight title in a ten rounder with Salita and team requesting the sanctioning of the fight by the WBO.  Undefeated middleweight Logan Holler is also featured on the card in a scheduled eight rounder against Schenelle Baldwin.  Other female bouts will be announced in the near future.  Since the fight card was announced, it has received its fair share of criticism because according to BoxRec.com some male fights will be included on the card which Taffet had an explanation for.

“I called my good friend and our promotor Dmitry Salita and said, ‘what is this? It’s an all-female card’,” Taffet stated.  “Those men bouts are non-televised fights that take place before the PPV telecast.  I wasn’t aware of them but don’t have any issue with them. Our five fight PPV card will be all female, there is no doubt about that.  We basically have all the fights done; I am just waiting for a couple of signatures.”

Taffet is adamant the all-female card is a statement for women’s boxing.

“We want to show the world that even when some of the male dominated networks don’t want to find a place for these women,” he said sternly.  “They can stand up within their own solution, it is about power in the ring and empowerment outside the ring.  I explained this to all the women, if you come on board with us, you will be supporting this cause.  This is what this card will be about.  All of them understand what is at stake, they are proud to be a part of it. It is all for one and one for all.”

The card is priced at an aggressive $29.95 because according to Taffet, “because they want the card to be accessible and for boxing fans to see how great these young women are inside the ring and how committed and passionate outside the ring.”

Obviously, the event needs to have some kind of economic success for it to make a statement and for there to be an opportunity to repeat it in the future but Taffet says it goes way beyond the dollars and cents.

“I did PPV as a living for 25 years and I generated 56 million PPV buys in the fights that I did,” Taffet said of his previous post as the PPV executive for HBO Sports.  “Ironically, my answer for this card to be successful, is it has to happen.  If this fight happens, then the women have made their point.  They have proven they can stand on their own and bring their fight to the public and never have anybody tell them you can’t fight and you will not be on television.  That is all that needs to happen.”

“From a financial perspective, when these women get in the ring, I know they are going to be successful enough and generate enough revenue to support many more of these cards,” he stated.  “I will also say I don’t want women to have to be relegated to PPV where they can generate money.  The issue is PPV is a great medium to generate money but the reason some of the biggest fights have been on PPV is because that is what the medium is designed for.  I want these women to have more exposure.  Women’s boxing needs to be seen on broader outlets.  We are doing this fight on PPV simply and not so simply to say, ‘don’t tell us we can’t fight, we can fight anytime we want.  We can put ourselves in a place.  The public that wants to see us fight, they are going to buy the fight and God bless them.’  Once the women get in the ring, they will be winners.  This will be part of history.  I am supremely confident we will generate enough money to be able to do others.”