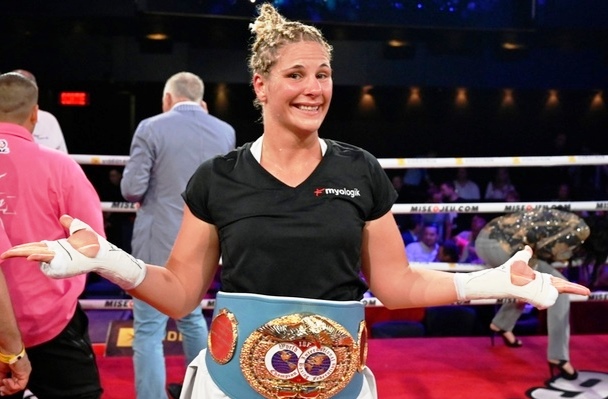 Undefeated records can look glittery and shiny like the polished chassis of a cobalt blue Shelby Cobra. But it’s what kind of engine you have inside and what kind of competition you have faced that truly defines performance.

In less than two weeks undefeated meets undefeated when Claressa Shields (10-0, 2 KOs) meets Canada’s Marie Eve Dicaire (17-0) on Friday March 5, at the Dort Federal Event Center in Flint, Michigan. The fight will be shown on pay-per-view on FITE.tv.

Estrada had fought and defeated contenders for years. Adkins had not. The difference in experience and talent was stark.

Just how good is Dicaire who sports an undefeated record and has never fought outside of Canada?

Dicaire’s record shows wins over solid competition like Mikaela Lauren, Chris Namus and Maria Lindberg. All three are former world champions that she was able to defeat in her home country.

The 34-year-old Dicaire uses a pure boxing style from a southpaw stance that features movement and speed from a distance. Though she has no knockouts on her record, the blonde speedster was able to defeat experienced fighters for 10 two-minute rounds.

When Dicaire faces Shields, it will be much different.

“I’m going to give the best fight I ever gave in my career,” said Dicaire who holds the IBF super welterweight world title.

Shields has faced numerous southpaws as two-time Olympic gold medalist and more than a few speedy fighters during her amateur career. But as a professional, she has yet to fight a southpaw with speed. It should be an interesting development.

“It’s not a concern. I’ve fought against plenty of southpaw as an amateur,” said Shields who holds the WBA, WBO WBC super welterweight titles.

Amateurs and pros are vastly different.

First there is no head gear, second the gloves are much smaller. Third, judging amateurs differs from judging professional prizefighting. Power and accuracy are more important than speed and touches. It’s the hurting game.

“I would never overlook an opponent,” said Shields. “I watched all her fights.”

Shields wisely changed trainers to develop her professional career and its paid dividends as she has discovered a new world of technical skills under her pro trainer John David Jackson.

“We’re fine-tuning things that we need,” said Jackson a former super welterweight and middleweight world champion who fought as a southpaw. “I can’t say much about Marie Eve. She is a good champion.”

Less than two weeks remain until the Shields-Dicaire pay-per-view card on March 5 The cost for the card is $29.95 and can be purchased at: https://www.fite.tv/watch/shields-vs-dicaire/2p8qn/.

Argentina’s Roman moved up in weight to accept the fight and though video of her fights was available, when the bell rang Parker got a surprise. Roman charged incessantly behind a peek-a-boo guard reminiscent of Winky Wright.

“She threw me for a loop and I had to adjust quick,” said Parker when asked if she expected Roman to fight inside close. “From what I saw she fought tall.”

Both Parker and Roman battled toe-to-toe with neither fighter resorting to clinching tactics. It was high level stuff seldom seen in prizefighting. Even the referee allowed the close-quarter fighting to continue and did not break them up. Too bad it was only eight rounds.

Parker won by majority decision and said on social media she would like a rematch though she won the fight.

America has another warrior.

Alicia Holzken (7-0) knocked out Nana Dokadze (1-6) in the first round of their fight on Saturday Feb. 20. The featherweight match was held at Baden-Wurttemburg.

Naomi Mannes (4-0) won by technical knockout in the first round versus Kim Jaeckel (3-4) on Saturday Feb. 20. The super lightweight match was held at Hamburg. Also, Marianne Ahlbourg (2-0) beat Aleksandra Rapaic (0-3) by decision after six rounds in a super welterweight match. Plus, Natalie Zimmermann (3-0) knocked out Sabine Hempel (0-1) in the first round of their lightweight bout.

Luciana Ascanio (1-0) won by decision after four rounds versus Azucena Zuniga (0-1) on Friday Feb. 19. The super flyweight match was held at Panama City.

Melissa Parker (4-0) won by majority decision over Argentina’s Marie Cecilia Roman (15-5-1) after eight rounds on Saturday Feb. 20. The super bantamweight fight took place at Orlando, Florida. Roman, 38, is the current IBF bantamweight world titlist. Her title was not at stake.