Marlen Esparza on Blockbuster PPV Card on March 5
Written by: David A. Avila 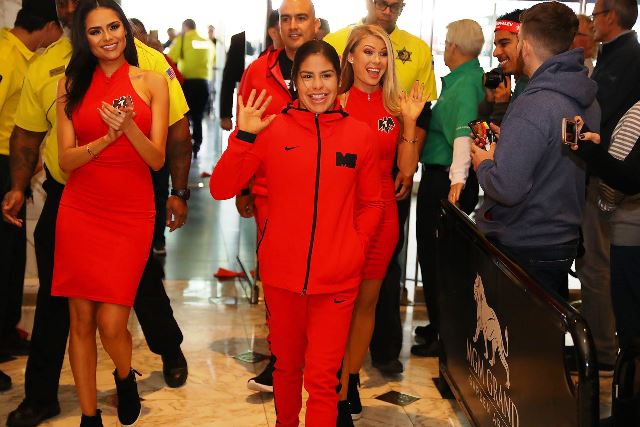 “I am delighted to add more super talent to this incredible all-female PPV event,” said Dmitriy Salita. “Marlen Esparza is an elite championship fighter who rounds out this already excellent fight card.”

A star-studded fight card got a serious boost of starpower with the addition of Olympian Esparza (8-1) who will be fighting Shelly Barnett (4-3-2) in a six round super flyweight clash on Friday March 5, at the Dort Financial Center in Flint, Michigan. It will be streamed on pay-per-view by FITE.tv

Esparza was the first American woman to ever medal when she captured the Olympic bronze at the 2012 London Olympics. She then entered the professional fight world and signed with Golden Boy Promotions.

“I’m excited to be fighting on this historic all-women’s card around International Women’s Day and to be reunited with my 2012 Olympic teammate Claressa Shields,” said Esparza. “I also want to thank my opponent for taking this fight. I’m looking forward to representing all female fighters on March 5 and putting on a great performance. I want all my fans to tune in to this pay-per-view. This is a great night for women’s boxing and I’m grateful to be a part of it.”

Shields (10-0) leads the all-women pay-per-view fight card and faces her toughest opponent yet in Canada’s undefeated Marie Eve Dicaire (17-0) for the WBA, WBC, WBO and IBF world titles. If successful, Shields will be the undisputed super welterweight world champion and the first woman to become undisputed in two weight divisions.

It won’t be easy.

Dicaire, 34, a speedy southpaw, has defeated several world champions in her professional career. She does not lack confidence.

“I did everything I had to get ready for this fight.  And I am!” exclaimed Dicaire who hails from Montreal, Canada.

Most past multiple-division champions rise in weight. Seldom to fighters drop down in weight. Shields has won world titles at 168-pounds, 160-pounds and now 154 pounds. It’s a lofty feat.

A heavyweight clash pits Danielle Perkins (2-0) against Monika Harrison (2-1-1) in a fight set for eight rounds. Both wield heavyweight firepower. Don’t expect this fight too last too long. It’s a rematch. Harrison is looking for revenge and Perkins wants a crack at the heavyweight world title.

Others on the card are undefeated middleweight Logan Holler (9-0-1) meeting veteran Schemelle Baldwin (3-1-2) in an eight-round fight. Holler is very talented but Baldwin’s only loss was to world champion Alicia Napoleon. A bantamweight fight pits Jamie Mitchell (5-0-2) against a pro’s pro in Noemi Bosques (12-15-3).

Now with Houston’s Esparza added to the card it provides yet another fighter with world championship caliber skills.

The pay-per-view fight card is headlined by Claressa Shields and Marie Eve Dicaire and takes place at 6 p.m. Pacific Time on Friday March 5. The cost  is a meager $29.99 Go to this link: https://www.fite.tv/watch/shields-vs-dicaire/2p8qn/

Michelle Klich (1-0) defeated Eva Hrkotova (0-4) by decision after four rounds on Saturday Feb. 27. The bantamweight fight was held at Berlin.

Jasmine Artiga (8-0-1) knocked out Randee Lynn Morales (2-2) in the second round on Saturday Feb. 27. The super flyweight bout took place at Orlando, Florida.