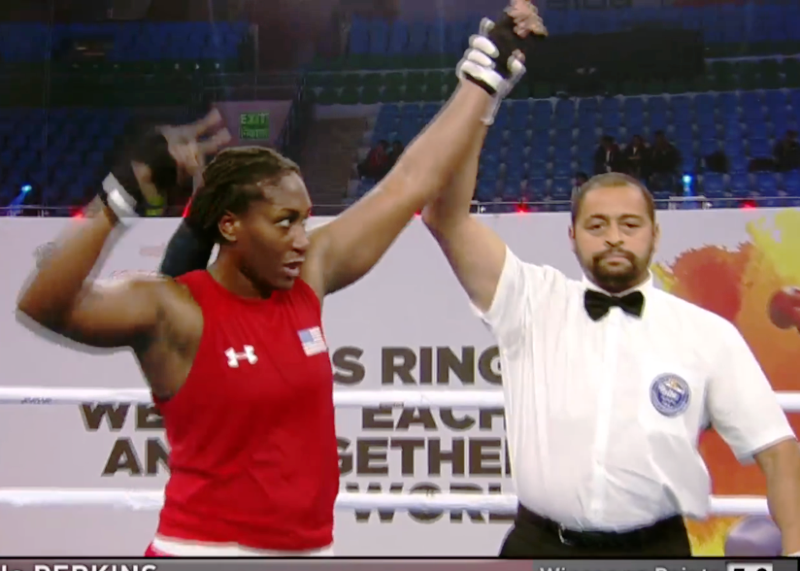 Danielle Perkins on Heavyweight Prowl on All Women Fight Card

In only her third fight as a professional, 38-year-old heavyweight southpaw Danielle Perkins finds herself as part of the historic “Superwoman” Pay-Per-View event scheduled for this Friday night, March 5th, from Flint, Michigan.

The card is an important one because it will be the first time in nearly two decades a female fight will headline a Pay-Per-View event when two-time Olympic gold medalist and multi-divisional world champion Claressa Shields takes on the also undefeated Marie-Eve Dicaire of Canada for all the belts at 154 pounds.

As an amateur, Perkins won a bronze medal at the ’18 World Championships and gold in 2019.  She made her pro debut in August and in her last fight in December she stopped Princess Hairston in the fifth round.

“It is definitely a different game,” she answered when asked of the differences between the amateurs and the pros.  “Definitely a different way to set up my attack and laying out my traps inside the ring.  It is a very different game. The amateurs are all about angles and multiple layers of attack, the pros you have to take your punches and deliver damage when you have the opportunity.”

One of the highlights for Perkins regarding the upcoming fight card is to get to spend some time with the star of the show, Claressa Shields.

“I am very excited, all-female pay-per-view card, Claressa Shields of course is the main event, I always wanted to meet Claressa,” Perkins said recently in an exclusive interview with the 2-Minute Round, the all-female boxing podcast.  “We have always crossed paths but have never had the chance to sit down and talk.  Every time she was in team USA for a camp, I was at home.  Every time she was there for an event, I was away fighting so I am really excited to actually see her fight in person and also of course being part of the card.”

In Harrison, Perkins will face a past opponent having handed the 37-year-old Waycross, Georgia, fighter her first loss back in her pro debut.  Perkins said she is looking to better her performance and not let it go the distance.

“I remember she was severely deconditioned, and I hope it is something she has addressed,” Perkins mentioned of her next opponent.  “I remember the punches coming in very slow, as far as my performance, there is a lot of things I went back and fine-tuned.  I feel that in this fight she is going to see a totally different fighter. I am not going to make that many more adjustments.”

Some of the adjustments Perkins has made in preparation for this fight is in hopes to not let the decision go to the judges but instead finishing her opponent before the final bell.

“I worked on delivering consistent power punches,” Perkins explained of her most recent training camp.  “Maintaining that consistent pressure, people love to pressure me.  Me being able to fight forward and being able to deliver two solid hammers every time.  I am looking forward to showcasing my skill set. That has been the game plan all throughout camp.  Being able to attack with strong punches.”

With a win here Perkins, who is managed by former HBO executive Mark Taffet, is looking to clean up the limited division as soon as possible.

“There is contenders but it is an issue if they want to be active,” Perkins said of her competition at heavyweight.  “I feel the weight class has been dormant for a little bit, for like at least five or six years, a lot of people have made the choice to go down in weight, so a lot of heavyweights are kind of tired of searching for fights.  I think that is the issue.”

“There is a lot of quality people in the division, just inactive,” she continued.  “My message to them is to start training because I want to fight.”

If she can’t find the fights, given the choice between dropping weight and making the move to MMA like Claressa Shields has threatened to do, Perkins says she will look for opportunities.

“When I first started boxing as an amateur, it seemed there was no actual females to fight,” she explained.  “That was one of my biggest obstacles, finding people to fight.  Slowly but surely, it started to pick up and I think the same thing it is going to happen in the heavyweight division.  A lot of girls are not going to feel like losing weight. I think more people are going to be open to it because there is going to be somebody notable to fight.  People want money.”

“They want to have good fights,” she said.  “I would love to fight a cruiserweight that comes up to heavyweight.  I would love to have that type of fight.  I feel the more I am showcasing my skill set, there will be people that will be willing to take that gamble.  I want to stay right there in the heavyweight division.  I don’t want to get kicked in the face or have to lose 20 pounds.”