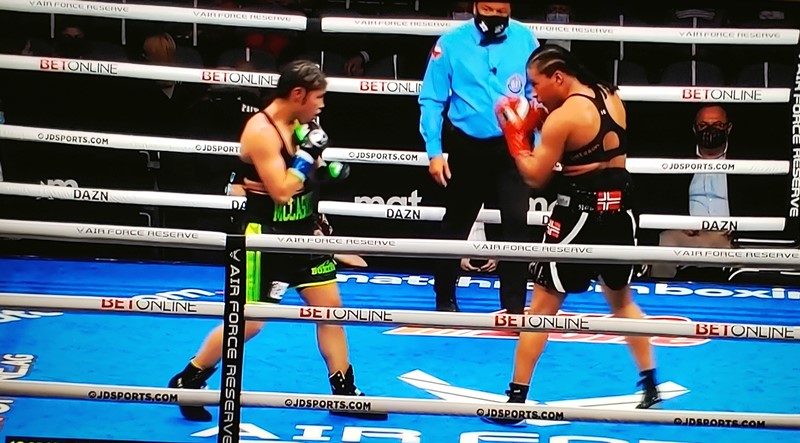 Jessica “Caskilla” McCaskill bludgeoned her way past Cecilia Braekhus once again to retain claim as undisputed welterweight world champion for a second time on Saturday.

All doubt was removed.

“I was very happy with it,” said McCaskill. “I did exactly what my coach told me to do.”

Chicago’s McCaskill (10-2, 3 KOs) proved once again to Norway’s Braekhus (36-2, 9 KOs) before several thousand fans at American Airlines Arena in Dallas, Texas, that she indeed is the true welterweight champion.

Behind hammering overhand rights McCaskill immediately set the tone for the rematch with Braekhus and quickly demonstrated that her first win back in August 2020, was not a fluke.

“We ran through combinations that we were training on,” said McCaskill who is trained and managed by Rick Ramos.

McCaskill crouched low and fired high and seldom allowed the taller Braekhus room to operate behind her more straight up style. For the first four rounds the Chicago fighter blasted rights on the former champion and seemingly had her dazed.

It was unfamiliar territory for Braekhus who was considered for years the top female fighter pound for pound by many. It was strange territory indeed.

Meanwhile, McCaskill walked into the boxing ring with 10 rounds of proven experience that her fight plan could work again. She was even better this time and steamrolled past Braekhus in the first three rounds.

Around the fourth round Braekhus seemed to gain traction behind a long jab and a sharp right cross. Suddenly the Norwegian fighter was more animated and letting her hands go. It was visible and seemed to make McCaskill pause. For the first time Braekhus seemed to win a round. Her corner men Abel Sanchez and Ben Lira pleaded with her to continue the aggressive activity.

McCaskill must have felt the shift in momentum, in the fifth round she erupted with another overhand right and a two-punch combination. McCaskill advanced with another slew of blows and had Braekhus moving backward. But Braekhus closed the round behind a couple of rights.

In the sixth round Braekhus opened up with a one-two combination not allowing McCaskill to gain advantage. Both exchanged freely and landed with hard shots but neither seemed affected by the blows. It was the best round yet as Braekhus closed again with a nifty combination. But was it enough?

McCaskill burrowed inside the reach of the taller fighter with Braekhus leaning down on her. The referee stopped the fight and deducted a point from Braekhus. He had warned the Norwegian fighter in earlier rounds and took away a point. It caused a little panic in Braekhus.

A stiff McCaskill jab opened up the eighth round and she followed up with more hammering rights. Braekhus fought back and landed her own rights and lefts but was out-punched by the smaller fighter.

It seemed like the momentum had shifted strongly in McCaskill’s favor and she seemed eager to build on it behind those hammer-like rights. Braekhus kept her distance behind long left jabs and tried circling around McCaskill in the ninth. The Chicago fighter was familiar with the tactic and stayed within range to fire rights and lefts. Braekhus seemed determined to land her vaunted right cross. Neither fighter was giving in.

In the final round both sides had no idea who was winning. McCaskill charged out of her corner determined to capture the round and Braekhus was equally determined. Both missed punches and tried to gain advantage but were both inaccurate. Braekhus connected on a three-punch combination and McCaskill fired overhand rights. Neither fighter was able to hurt the other.

After 10 rounds the judges surprisingly scored it 100-89, 99-90 and 98-91 all for McCaskill in her first defense of the welterweight world championship. She had retained her grip on the WBA, WBO, WBC, IBO, IBF world titles.

“I’m happy about it,” said McCaskill.

Braekhus expected to regain the titles but quickly found herself behind after the first three rounds. She never could close that large gap.

“It was a tough close fight,” Braekhus said. “She is a tough fighter.”

McCaskill’s win leaves her suddenly in the middle of several options including a rematch with undisputed lightweight champion Katie Taylor who defeated her several years ago. Or a match with the undisputed super welterweight champion Claressa Shields who won last week in dominating fashion.

“I want to work. I want to fight, I want to train,” said McCaskill about what is next.

There’s truly no disputing that McCaskill is the welterweight world champion.