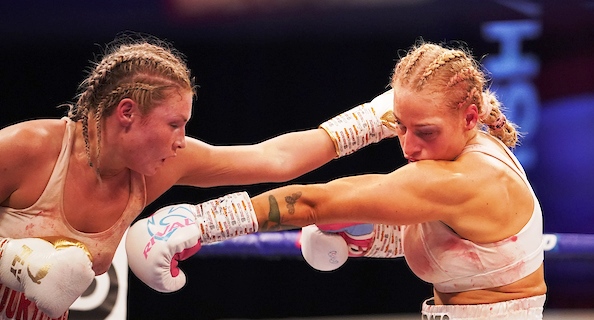 Beware of the unknown in the prizefighting world. It’s a lesson many fail to remember.

England’s Shannon Courtenay (7-1) took the vacant WBA bantamweight world title by unanimous decision, but it was Australia’s Ebanie Bridges (5-1) who took the hearts of fans with her bravura performance.

Before the actual fight, critics and pseudo experts everywhere decried the matchup claiming Bridges undeserving of the world title matchup. They were all wrong, but in a way, no one really knew what to expect.

Bridges was an unknown fighter whose only recognizable victory was against solid American fighter Crystal Hoy. Though that fighter had many losses she was known in the female fight world to be a fierce competitor. Bridges has an even more fierce determination.

The school marm from “down under” looked anything like a prizefighter. She was criticized by hundreds of social media trolls on a daily basis for her looks and attitude. Even Courtenay fired a few coals into that fire.

This past Saturday, Bridges snuffed out all critics with a performance that showed the teacher from New South Wales can indeed fight.

Courtenay was the solid favorite going into the fight and deservedly so. She had knocked out her last foe with an impressive display of power-punching and had barely lost to the more touted Rachel Ball who was originally slated to fight for the world title.

All signs pointed toward a mismatch.

As soon as the first bell rang it quickly became apparent that Bridges was not a pushover. Immediately the Aussie traded heavy blows with heavy-handed Courtenay and a look of surprise could be seen in the English fighter. I’m sure promoter Eddie Hearn had a Andy Ruiz déjà vu moment or two.

Courtenay shot out jabs and moved out of danger. Bridges remained throughout the fight in stalking mode. It was quite a surprise to see the fighter known as the “Blonde Bomber” keep steadfast in pursuit of a knockout and her assortment of punches behind a tight guard showed skill.

In the fifth round Courtenay connected solidly with a combination that shook Bridges. But the Aussie continued her pursuit.

Bridges seemed even more determined after being wobbled and it may have caused a shock to Courtenay. The more they exchanged violent blows the more Bridges seemed inspired.

Things changed around the eighth round as Courtenay refrained from standing still and began firing jabs and combinations. She finally took control of the pace but the danger remained as long as Bridges kept moving forward. Even a badly swollen left eye did not slow down the Aussie.

After 10 rounds the two judges scored it 98-92 and a third 97-94 all for Courtenay. The Prizefighters.com scored it 96-94 for Courtenay who now holds the WBA bantamweight world title.

“I have to give credit to her because that was a bloody good fight. She was tougher than I thought she’d be,” said Courtenay about Bridges. “I knew if I stuck to my boxing I’d win…When I was getting into a war it was stupid of me. The jab won me the fight.”

“Great fight. I loved every minute of it,” Bridges said on social media.

It’s an early candidate for Fight of the Year.

McCarter has long been one of boxing’s top fighters pound for pound in the world. She has not lost a fight in more than 14 years, but without a large promotion company backing her career, the Las Vegas prizefighter has flown under the radar of the boxing world her entire career.

During the fight McCarter showcased her boxing prowess. No other female fighter possesses her fighting skills. Despite severe size and weight disadvantages, McCarter was able to land big blows whenever she fired and seldom was hit with anything dangerous during the fight.

WBO middleweight titlist Savannah Marshall won by knockout over last-minute replacement Maria Lindberg in the third round. Of course, she wants a match with Claressa Shields and vice versa. But for Shields the money must be right.

“There’s nowhere else for her to go. She needs me just as much as I need her,” Marshall said.

Shields has other options. Marshall could fight Christina Hammer.

Gabriela Alaniz (10-0) knocked out Daniela Molina (1-6-3) in the fifth round on Saturday April 10. The flyweight match took place at Santa Fe. Also, Jennifer Meza (4-1) knocked out Micaela De Los Angeles (2-4) in the third round of a flyweight bout.

Clara Lescurat (1-0) won by knockout in the fifth round over Gisela Ibanez (0-2) on Friday April 9. The super flyweight bout took place at Buenos Aires. Also, Carolina Ferrari (1-0-1) and Gisela Quintanilla (0-0-1) fought to a draw after four rounds in a flyweight match.

Enja Prest (1-0) was the winner by decision after four rounds versus Katie Mitchell (0-1) on Saturday April 10. The welterweight contest was held at Gunnedah, New South Wales.

Marianne Ahlborg (3-0) won by unanimous decision after six rounds against Klaudia Vigh (3-27-1) on Saturday April 10. The super welterweight match was held at Berlin.

Mea Motu (7-0) won by knockout in the first round over Toni Moki (0-3) on Friday April 9. The super welterweight bout was held at Auckland. Also, Troy Garton (1-0) defeated Ayisha Abied (0-3) by majority decision after four rounds in a lightweight bout.

Layla McCarter (45-13-5) won by knockout in the fifth round versus Elene Sikmashvili (9-10) on Saturday April 10. The match was scheduled to take place in the super welterweight division but Sikmashvili weighed more than 170 pounds. The fight took place in Dubai.