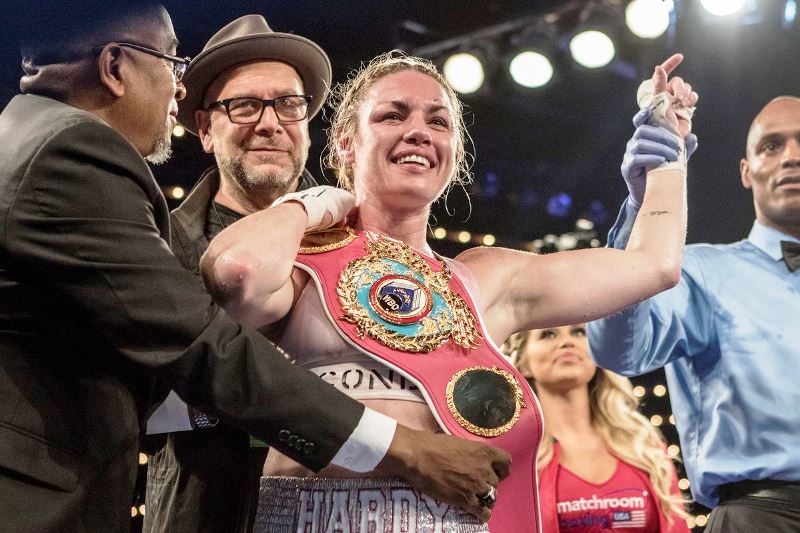 There is no other promotor in the last 20 years who has supported female boxing more than Lou DiBella of DiBella Entertainment and here comes another big show.

Heather Hardy (22-1) fights Jessica Camara (7-2) in a lightweight matchup on Friday May 14, at Murfreesboro, Tenn. UFC Fight Pass will stream the DiBella Entertainment fight card live. Three other female bouts will be featured.

From his club show level series in New York City to securing mayor dates on big networks and streaming platforms, Mr. DiBella has always fought to showcase his vast stable of female boxers on the biggest stage possible.

In a recent exclusive interview with the all-female boxing podcast 2-Minute Round, Lou shared what new signings he is excited to work with.

“A young woman named Mikiah Kreps, she is a terrific fighter,” he stated enthusiastically.  “Amanda Galle, who I co-promote with Lee Baxter out of Toronto.  Amanda is a terrific talent, a future world champion.  There is plenty of talent on the horizon and there are more and more women who are amateurs who have a desire to turn pro.  We have to keep creating more opportunities because right now there isn’t enough slots and there aren’t enough opportunities to keep women busy in this country.”

Despite the lack of spaces on fight cards in the United States, DiBella says he is optimistic about the current state of female boxing in America.  “I love the direction women’s boxing is going in now.  I think the talent pools will continue to get deeper.  I also think we need to recognize where the talent pools are the strongest and make the best fights we can at those weights.  I will always be interested in Claressa (Shields) because of how good she is but frankly there is not the same opportunity to make wars and competitive fights like there is at the lower weight classes.”

One of his biggest concern’s is the lack of opportunities on television and/or streaming platforms for women’s boxing.  Without the economic push those type of slots can provide, it is hard to see the cream of the crop fight often if not at all.  One thing DiBella has done is to partner up with over-the-top platform of UFC Fight Pass, to give women’s the opportunity to showcase their skills.

“I have three 140-pound champions waiting for fights right now.  There is a lack of sufficient television and streaming dates for the ladies.  That does have to change,” DiBella said of Mary McGee, Christina Linardatou and Kali Reis, the IBF, WBO and WBA champions respectively, all under his stable.  “I am grateful for UFC Fight Pass for creating a little series where we are going to do a quarterly show with all females.  That kind of platform needs to be more common in boxing.  We need more dedicated, doesn’t need to be all women shows, but dedicated slots for women.  I would like to see if there is going to be three or four televised fights, there is a women’s fight on every card.  At the very minimum, there is a women’s fight on every card even if it’s on a non-televised undercard.”

DiBella feels the more women are showcased over the airwaves, the brighter the future of female boxing will be.  “Right now, having to scramble to get that one odd slot for female, here or there, that doesn’t encourage all those women who are learning the craft in gyms all over the country.  It doesn’t encourage women who are amateurs and who turn pro.  You really have to love it to be a female professional fighter in the United States.”

Always outspoken, DiBella has always been consistent with his views on female boxing including the debate between the two-minute and the three-minute rounds.  As the movement to increase the minutes female fight from two to the more equitable three, DiBella feels it is big mistake and a change which will not accomplish the desired goal.

“if it is ten rounds, women are throwing down for 20 minutes of that fight,” DiBella continued.  “You are not going to get the action in the three-minute round that you get in a two- minute round.”

Despite his opinion on the length of the rounds, DiBella does not come off as antiquated as he has thought of a solution to increase the popularity of female boxing.  He does reinforce the fact that before it can go into effect, a study needs to be made by qualified neurologists and other specialists.

“I think what you have to look at as far as any changes or adjustments is to increase the popularity of women’s boxing is to make the gloves smaller for women,” he explained.  “Right now, women are using the same gloves the men are using.  My thought is to use six-ounce gloves and when you get into the higher weight classes to use eight-ounce gloves as opposed to eight-ounce and ten-ounce gloves.”