Kali Reis vs Jessica Camara
Written by: David A. Avila 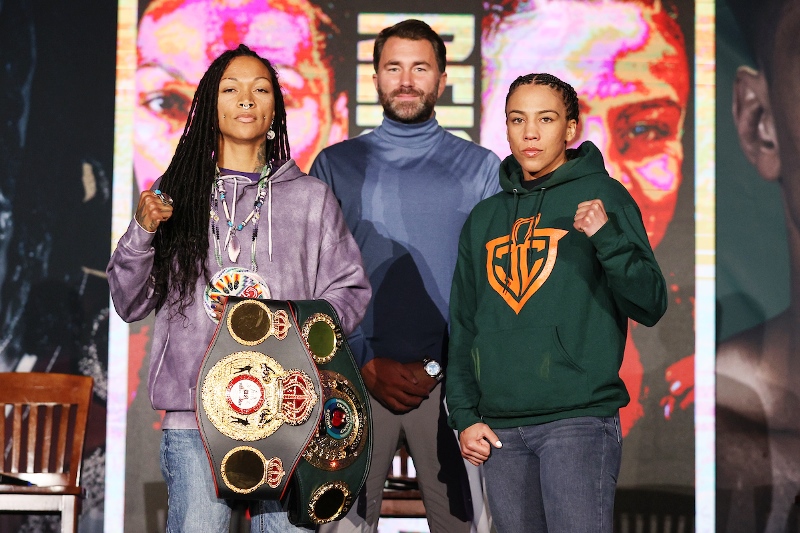 Battle of the Super Lightweights II: Kali Reis vs Jessica Camara on Friday

Canada’s super tough Jessica Camara challenges WBA titlist Kali Reis for not only her belt, but two others and entry to the finals of the super lightweight tournament.

Both also are represented by the same management team.

Camara (8-2) belted her way to the tournament based on a win over a former world champion months ago, now she faces Reis (18-7-1, 5 KOs) on Friday Nov. 19, at the SNHU Arena in Manchester, New Hampshire USA. Its one of four Matchroom Boxing world title fights streamed on DAZN.

Camara’s first tournament bout did not take place several months ago in San Diego because her opponent’s problem with entering the country, but Reis did fight on that same card and was able to shake off a tough and determined Diana Prazak to reach this point.

Reis, a former middleweight world champion, moved down three weight divisions and has shown it to be the proper choice. She’s battled many of the best fighters in women’s prizefighting including Cecilia Braekhus, Christina Hammer, and Hanna Gabriels.

Against Braekhus in 2018, it was the first time women’s boxing was ever televised by HBO. Though Reis lost by decision, she floored Braekhus in the seventh round and revealed there were chinks in the Norwegian queen’s armor.

Always a very technical fighter, it’s the physical strength of Reis that allowed her to compete with much bigger middleweights.

“I was the underdog for so long and top dog this time,” said Reis, 35.

Camara seemed to be an afterthought when she was matched with New York’s Heather Hardy, the former WBO featherweight world titlist last May in Tennessee. The designated fight weight was 135 pounds and though Camara was floored in the first round she battled back to win by decision. It was an impressive win especially against a battler like Hardy.

Strength and determination are Camara’s strongpoints.

The Canadian fighter has only been in the fight game since 2017 but has jumped on the fast track to reach this point quickly. She will be entering the ring wearing trunks displaying remembrance of fallen Mexican fighter Jeanette Zacarias Zapata who died after a fight in Canada earlier this year.

“This is the hurt business. I’m not going to be in a pillow fight with her. This is war,” Camara said.

“We are here to hurt each other in the name of women’s boxing,” said Reis.

The winner moves on to fight United Kingdom’s Chantelle Cameron.