Another Look at Reis and Camara and More
Written by: David A. Avila 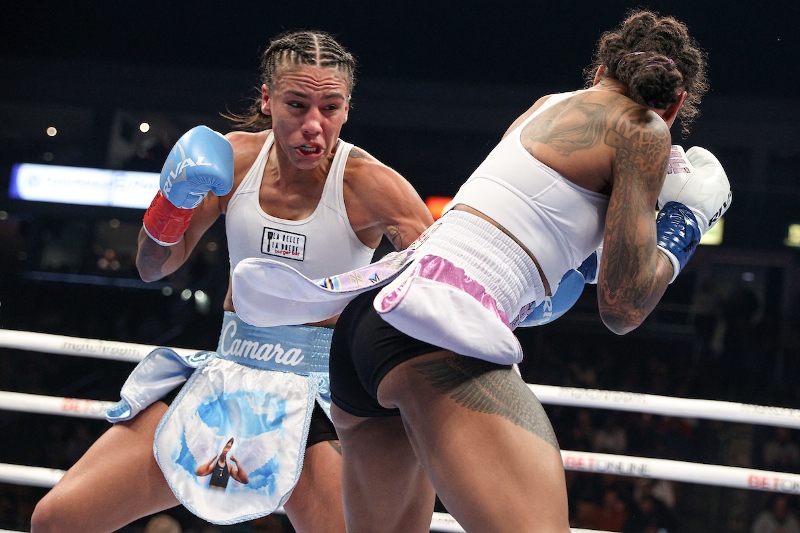 When Kali Reis and Jessica Camara concluded their epic battle, it continued yet another weekend of back-to-back-to-back sensational championship fights. Furthermore, all were televised, streamed and available for fans.

In all my decades covering women’s championship fights I cannot remember a similar period with as many world title fights capturing the public.

All are candidates for Fight of the Year.

Reis and Camara entered the prize ring with contrasting styles and left fans mesmerized with their technical prowess and zeal to compete at an elite level. The semi-finals of the super lightweight tournament saw two clash of the titans.

Three weeks ago, England’s Chantelle Cameron and America’s Mary McGee traded blows with neither giving an inch. It was a surprise to the British fighter who needed to resort to plan B to win the fight. McGee was not overrun by furious combinations unleashed on her and simply planted her feet and fired back. It marked the start of a glorious month of high caliber battles.

Next, was America’s Mikaela Mayer and France’s Maiva Hamadouche meeting in Las Vegas, Nevada to determine the victor of the first leg of the super featherweight tournament. From the opening bell these two unloaded with hellish blows on each other for 10 rounds. I’ve never seen any world champion like Hamadouche receive as many blows to the chin with nary a dent. And though pummeled by the taller Mayer, the French fighter simply bore in and fired more and more blows.

Imagine if they had fought three-minute rounds?

Another fight that needed an extra minute per round took place a week later in Anaheim, California where two Mexican flyweights Arely Mucino and Jacky Calvo met. The action started early with Mucino a former four belt world champion opening up with her multiple combinations. Calvo simply deflected the incoming fire and found her remedy in unleashing timely and effective counter left hooks. It changed the momentum and aroused the thousands of fans at the stadium to fever pitch.

In another super featherweight match in England, we saw America’s Alycia Baumgardner fly over to meet the vaunted Terri Harper defend her WBC title after two postponements due to injury. British fans were unaware of what to expect from the American fighter, but they soon discovered her fighting skills and punching power rival any fighter including Harper. Baumgardner simply beat Harper to the punch and rendered her unconscious while standing. If not for the quick reflexes of the referee it could have been worse. Instead, it was simply a knockout win for Baumgardner who thrust herself in the middle of the super featherweight tournament. All that remain are Mayer, Baumgardner, and Korea’s Hyun Mi Choi.

Then, this last weekend, Reis and Camara performed their magic. I’ve never seen a month of women’s prizefighting that rivaled these past three weeks. It was high level battles in consecutive weeks. And it’s not over.

Uncrowned champion Kenia Enriquez meets Gabriela Sanchez in the main event this Friday Nov. 26, in Tijuana, Mexico. It’s a large fight card and the light flyweight fighter will be the main event. It will be streamed live on Bluemoonfight.TV.

In successive weeks in December, we have six world champions reloaded and ready to defend.

On December 11, both Katie Taylor and Claressa Shields compete in separate fight cards in the United Kingdom.

On the same day, Shields, the undisputed super welterweight and middleweight world champion returns to middleweight and meets Ema Kozin in Cardiff, Wales. The title fight will be shown on FITE.TV pay-per-view.

It’s an incredible array of action coming up.

Can they all continue the level of fighting that we just saw with Reis and Camara?

If only they were all three-minute rounds.

Natalia Alderete (4-5) beat Estrella Valverde (18-10-2) by technical decision after five rounds on Friday Nov. 19. The bantamweight fight was stopped early due to a bad cut over Valverde’s eye at Buenos Aires.

Ayana Miyasaka (3-0) won by split decision after four rounds versus Moemi Inukai (2-1) on Friday Nov. 19. The light flyweight match was held in Tokyo.

Marianne Ahlborg (5-0) won by technical knockout in the second round over Lili Jumali (1-2) on Friday Nov. 19. The super welterweight fight took place at Gothenburg.

Rugnapha Kaewkrachang (14-15-1) won by unanimous decision after six rounds against Arisara Wisetwongsa (0-3) on Friday Nov. 19. The flyweight match was held at Pathum Thani.

Kali Reis (19-7-1) won by split decision after 10 rounds against Canada’s Jessica Camara (8-3) on Friday Nov. 19. The WBA, WBO, IBO super lightweight world title fight was held at Manchester, New Hampshire. It was the semi-final of the super lightweight tournament.