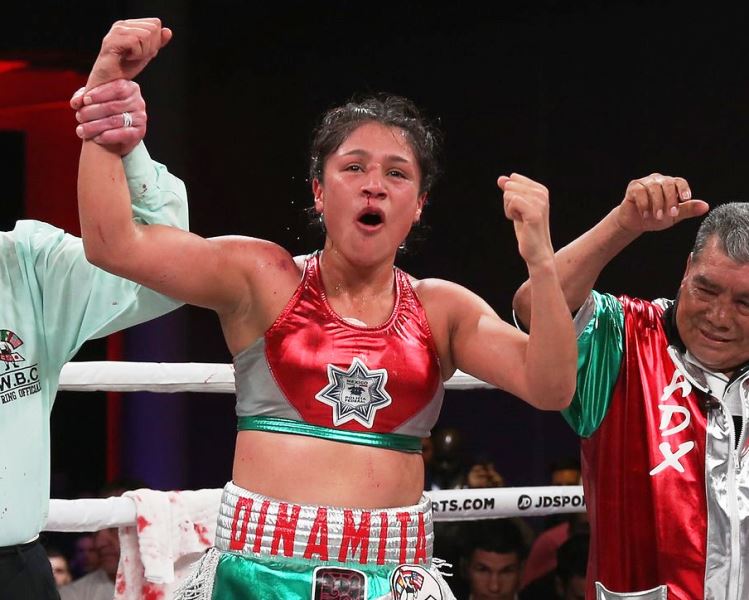 Puerto Vallarta is located in the state of Sinaloa where Esquivel hails from.

From the opening bell Cruz used a left cross to the body followed by a right hook to the head from her left-handed stance to score four times in the opening bell. It seemed to confuse Esquivel.

After the opening salvo, Cruz continued to bore in with her head lowered behind a fusillade of punches and unleash wide scoring blows. Whenever Esquivel retaliated it was single shots. She rarely landed more than a single shot.

Cruz continually lowered her head and fired blows, but Esquivel did not figure out the remedy right away. Though Esquivel countered with strong rights and some good jabs, Cruz out-worked in almost every round.

Esquivel had her moments in the fifth round when she connected with a right uppercut as Cruz bored in. But it wasn’t enough to hurt or stall Cruz’s attacks.

Cruz looked to be tiring until the eighth round when she unloaded a five-punch combination that rocked Esquivel who countered with a strong right cross. That was the theme of the fight.

In the ninth round Esquivel figured out the pattern and stayed outside while luring Cruz into jabs and counters. It stalled the champion’s attack and Esquivel clearly had her best round of the fight. The jabs and the right counters scored heavily for the challenger.

The final round saw Cruz again return to form and just simply out-work Esquivel who was never out of the fight, but simply out-hustled. One judge shockingly scored it 97-93 for Esquivel, but two others saw Cruz the winner 98-92 and 97-93. Cruz retains the WBA featherweight world title.

“I’m happy to retain the title,” said Cruz who was making her first defense since winning it last April against Jelena Mrdjenovich in New York. “I landed the bigger punches.”

Cruz also mentioned she would like to fight the other featherweight world titlists including Puerto Rico’s great Amanda Serrano.

“First I have a lot of things to clean up,” said Cruz about her fighting skills.

An expected clash between Kenia Enriquez and Gabriela Sanchez Saavedra on Friday Nov. 26, in Tijuana was canceled. Enriquez twice failed to make weight and Sanchez refused to fight at a third heavier weight.