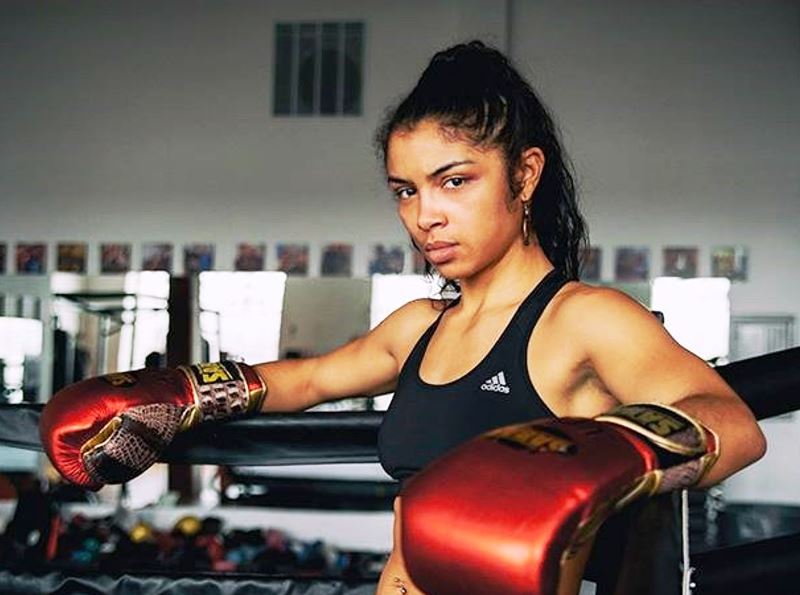 Undisputed welterweight champion Jessica McCaskill returns to action immediately after signing a promotional contract with Matchroom Boxing and several other American females too in different cards.

McCaskill became one of the top female fighters pound-for-pound for her repeated victories over longtime champion Cecilia Braekhus in back-to-back fights. Now, the Chicago fighter has full claim to undisputed status.

She is a good one.

At first, her planned foe was scheduled to be Argentina’s Victoria Bustos but the former lightweight world titlist who moved up in weight had problems getting into the USA. Possibly vaccination concerns. Now, Wyatt, an American, has accepted the fight.

Wyatt has experience fighting world titlists and seeks to finally crack the top. It’s a lofty goal but that’s the world of prizefighting.

Facing the challenger is one of the few undisputed world titlists in boxing today. It’s been a crazy and rewarding road for McCaskill who challenged Katie Taylor four years ago in a loss, but showed mettle in accepting the fight and giving the Irish fighter’s first competitive pro fight.

Then, McCaskill upset Erica Farias and defeated another Argentine Anahi Sanchez and again beating Farias in three consecutive fights. It gained her two super lightweight world titles. It also put her on Braekhus hit list and the two met in Oklahoma where McCaskill overwhelmed the Norwegian fighter. At the time, many saw Braekhus as the best fighter pound for pound.

Many were not convinced by McCaskill’s initial victory over Braekhus so they did it again. It was even easier the second time for the Chicago fighter and she gained a firm grip on the world championship.

This will be McCaskill’s second defense. It’s her first appearance on a Las Vegas fight card too. She’s worth watching in-person.

This week it was announced former world titlist Ava Knight will fight Indeya Smith at the Staples Center in Los Angeles on Sunday Dec. 5. Its part of the Gervonta “Tank” Davis versus Isaac Cruz lightweight world title fight card by Mayweather Promotions. Showtime pay-per-view will televise.

Knight, 33, formerly held the flyweight world title and at one-time was one of the most feared female fighters in the world. But during her most active period, women’s boxing in America was almost dead. So, she traveled to Mexico and fought there.

After she was let go by the Mexican promoter Knight has fought sporadically, but no one can deny she has the talent to crash any flyweight world champion’s dreams. It’s been two years since her last fight. She will be participating in an eight-round super flyweight match against Smith.

Also on the same card, Mia Ellis who trains in the same gym as Tank Davis, will be fighting Elizabeth Tuani in a lightweight bout set for four rounds.

Miller, who held an interim super welterweight title, has been inactive for two years and returns to action against Sonya Dreiling a solid fighter out of Alabama. It’s the main event on the Englebrecht card. The doors open at 6 p.m.

Ironically, Berghult now adds the title vacated by stablemate Claressa Shields who is moving back up to middleweight. Berghult, Shields and Rankin are all managed by Mark Taffet.

Speaking of Claressa Shields, her middleweight fight with Ema Kozin has been moved from Dec. 11 to Jan. 29, 2022 and will be shown on Sky Sports. The co-main event was canceled due to an injury to one of the participants.

Shields, holds all of the middleweight world titles and Kozin is undefeated and is a southpaw based in Slovenia. The middleweight showdown takes place in Cardiff, Wales.

Lucrecia Belen (2-1) beat Erica Alvarez (2-2) by decision after four rounds on Saturday Nov. 27. The featherweight fight was held at Cordoba.

Michelle Klich (4-0) won by unanimous decision after 10 rounds against Oksana Romanova (10-32-1) on Friday Nov. 26. The bantamweight fight was held in Berlin.

Chimwemwe Banda (3-2) defeated Fatima Mbeka by technical knockout in the third round on Saturday Nov. 27. The super bantamweight fight took place at Lilongwe.

On Saturday Dec. 4, atomweights Montserrat Alarcon (16-4-2) and Silvia Torres (20-2-2) meet 10 rounds for the WBA world title at Guanajuato. This is Alarcon’s third defense.

Diana Starkova (2-0-1) knocked out Alina Kiselova (0-2) in the first round on Friday Nov.26. The super lightweight contest was held at Kharkiv.

Chloe Watson (1-0) won by decision after four rounds versus Judit Hachbold (5-13) on Friday Nov. 26. The flyweight bout was held at London.

Debora Rengifo (16-8-1) knocked out Yoselin Fernandez (10-1) in the eighth round on Saturday Nov. 27. The Venezuelan flyweight title fight was held at Turmero. Also, Estefania Matute (3-18) won by majority decision after four rounds against Maria Milano (12-3-1) in a light flyweight bout.