Katie Taylor vs Firuza Sharipova and More News
Written by: David A. Avila 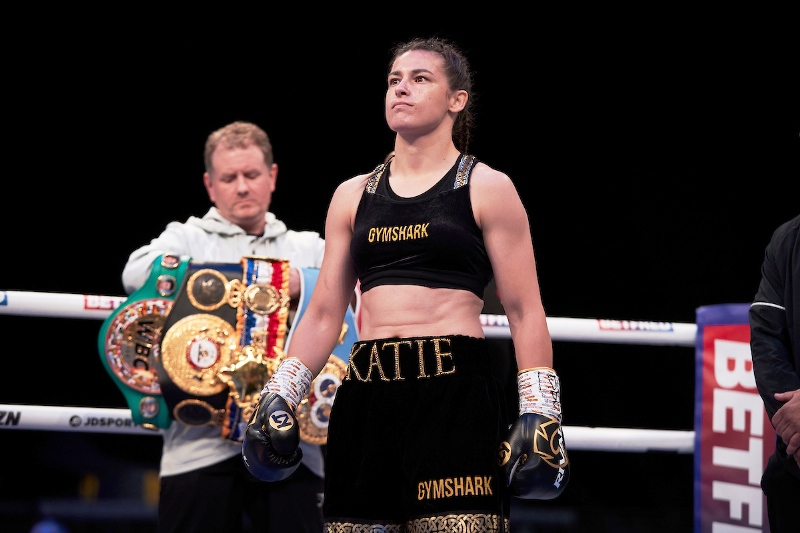 One of boxing’s best years in a decade culminates with Katie Taylor delivering another salvo of her brand of fighting.

In the next two weeks three of the top female fighters pound-for-pound perform.

It’s been many years since prizefighting saw a year like this especially in the women’s side of fighting. The best are facing the best all around the world except this fight pitting Ireland’s Taylor against Kazakhstan’s relatively unknown Sharipova.

But you never know.

Anything can happen in boxing. All it takes is one slip up and down you go. Though Sharipova doesn’t have the same resume as Taylor she has two fists and only one loss, so far.

According to Matchroom’s Eddie Hearn, if Taylor wins this weekend and Amanda Serrano wins next weekend the two will meet in a showdown early next year. Of course, they tried to meet before but the circumstances just weren’t right. Now things seem to be lined up perfectly. We shall see.

Taylor has been paving the way for women’s boxing with a relentless pursuit of greatness. She has been fighting the best in her division and knocking them off one by one. In this fight it seems like she is taking a fight to maintain momentum and keep sharp for her showdown with Serrano.

Brooklyn’s Serrano has a tougher task in her upcoming fight against Spain’s Miriam Gutierrez a strong lightweight who was defeated earlier in the year by Taylor.

Serrano, a featherweight, sparkled in knocking out Argentina’s Daniela Bermudez a fellow pound for pound fighter last March in Puerto Rico. Then she dominated Mexico’s super bantamweight world titlist Yamileth Mercado last August in Cleveland. But both of those fights were smaller fighters moving up. Now she is the smaller fighter moving up.

Though Serrano has incredibly captured world titles in seven weight divisions, the brunette southpaw really has a petite body. More model than bodybuilder and more demure than you might expect. She lets her co-manager Jordan Maldonado do the talking and she does the fighting.

On September 18, Serrano has a date to fight Gutierrez who went the distance with Taylor last year. It was the Spanish fighter’s only career loss. She is very strong, but so is Serrano. They meet in Tampa, Florida on the same card as Jake Paul versus Tyron Woodley.

Paul signed Serrano to a lucrative promotional contract which seems to have boosted the pretty Boricua’s presence with fans not familiar with women’s boxing or boxing.

Not to be out-shown, Seniesa “Super Bad” Estrada fights one last time in 2021 a year that saw her win world titles in the minimumweight and light flyweight divisions. Many rate her among to top fighters pound-for-pound and with reason.

Estrada easily handled Anabel “La Avispa” Ortiz last March to take the WBA title away from the minimumweight champion from Mexico City. Then, she met Japan’s light flyweight world titlist Tsunami Tenkai and the two furiously battled it out for 10 rounds. It was the best fight of the entire card. Estrada won the WBO light flyweight world title in a back-and-forth struggle.

Boxing does not get better than that.

Now Estrada (21-0, 8 KOs) drops back down to 105 to defend the WBA minimumweight title against Maria Santizo (9-0, 5 KOs) on Dec. 18, at the AT&T Center in San Antonio, Texas. DAZN will stream the Golden Boy Promotions card that also includes Marlen Esparza fighting Anabel Ortiz.

Ava Knight fought and defeated Nancy Franco in a tight struggle. It had been two years since the former world titlist had fought. She was scheduled to fight another, but that fight was scrapped. Franco accepted the fight at 118 pounds.

Franco was tough and nearly went the distance against the powerful Adelaida Ruiz last September. Against Knight the two warred all six rounds. Knight won by unanimous decision and looks capable of winning another world title.

Mia Ellis, who trains at the same gym as Gervonta “Tank” Davis, fought Elizabeth Tuani in a four-round bout held in the super featherweight division. Ellis is tall, quick and tough. She was forced to fight at close quarters by Tuani and their fight was very entertaining.

That’s what boxing is all about…entertainment.

It was pleasing to see Mayweather Promotions put two female fights on their boxing card. Maybe one day Premier Boxing Champions will do the same. They have never put a women’s bout on their fight card. Here’s hoping.

Taylah Robertson (4-1) was victorious by decision after eight rounds against Kylie Fulmer (7-2) on Saturday Dec. 4. The bantamweight contest was held at Fortitude Valley, Queensland.

Souad Masmoudi (2-0) beat Dragana Golic (0-6) by decision after four rounds on Friday Dec.3. The flyweight bout was held at Chaumont.

Sarah Liegmann (2-0) was the winner by unanimous decision after four rounds against Nana Dokadze (1-12) on Saturday Dec.4. The super bantamweight fight was held at Cologne.

Christina Hammer (27-1) knocked out Daniele Bastieri (3-2) in the first round on Friday Dec. 3. The super middleweight match was held at Ilsenburg.

Chaoz Minowa (7-3) knocked out Yumemi Ikemoto (7-2) in the second round on Thursday Dec. 2. The OPBF flyweight title fight was placed at Tokyo.

Marija Malencia (2-0) beat Esmeralda Novruzaj (0-1) by decision after four rounds on Saturday Dec. 4. The lightweight match was held at Tetovo.

Chelsey Arnell (1-0-1) defeated Sangeeta Birdi (1-3) by decision after four rounds on Saturday Dec. 4. The featherweight match was held in London.

Nina Hughes (1-0) won by decision over Claudia Ferenczi (20-87-8) after six rounds on Friday Dec.3. The super bantamweight fight was located in London.

Eva Guzman (19-1-1) won by technical knockout over Yanetsy Gomez (0-6) in the fourth round on Tuesday Nov. 30. The light flyweight bout took place in Caracas. Also, super bantamweight Ana Maria Lozano (21-11-1) knocked out Paola Hernandez (0-1) in the first round.