Amanda Serrano vs Miriam Gutierrez and More News
Written by: David A. Avila 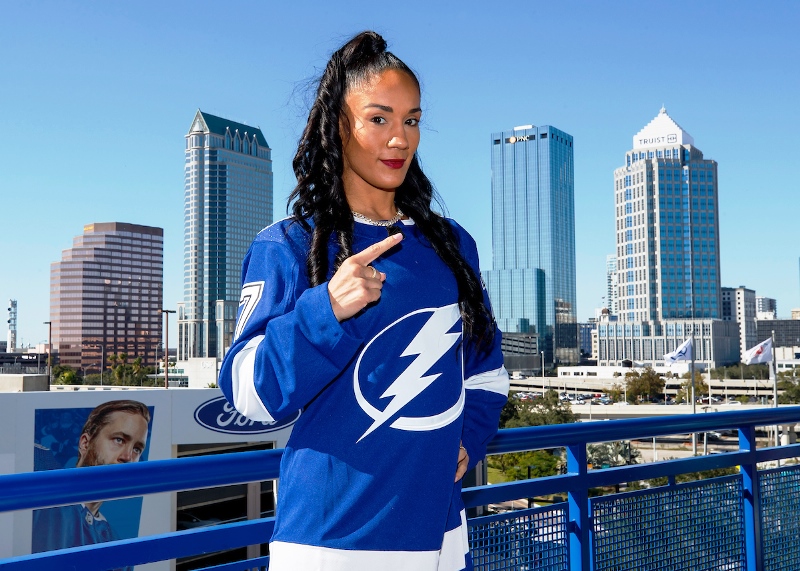 Brooklyn’s Amanda Serrano takes on yet another challenge in moving up to lightweight to face Spain’s Miriam Gutierrez.

A Serrano win assures a showdown with Katie Taylor early next year.

It’s not an easy fight for Serrano.

Physically the brunette Puerto Rican fighter has the built of a ballerina or fashion model. Petite is the best word to describe the fighter who packs power in both fists and ranks among the greatest fighters male or female.

How does she do it?

Skill and more skill are the reasons that she’s skewered and swept aside the competition in often easy fashion. And, of course, power can equalize any close fight Serrano engages in.

Gutierrez, 38, has a rough and tough style that didn’t work against an agile and speedy Katie Taylor last year when they met in London, England. Serrano doesn’t run. She moves in and breaks down the opposition. The Spanish lightweight expects her strength and longtime experience in the 135-pound limit division to help against Serrano.

This is the Spanish lightweights first time opposing an American fighter and usually that surprises Europeans. Their styles are quite different. But in many ways, Gutierrez has an American style that’s bent on aggression.

Despite pandemic conditions Serrano was able to establish herself as a draw by battering fellow pound for pound fighter Daniela Bermudez of Argentina and Mexico’s Yamileth Mercado. Both wins were seen on television by millions. It firmly established the attractive Boricua as a star.

For Serrano a win is crucial for her to move on and face Taylor for her undisputed lightweight crown. A showdown with the Irish fighter could be the greatest showdown in history for women. It could also set the bar for the future of elite women’s boxing.

Serrano versus Gutierrez is the co-main event with Jake “The Problem Child” Paul facing Tyron Woodley in a rematch in a cruiserweight fight at Amalie Arena in Tampa. Showtime pay-per-view will televise the fight card.

Now Taylor waits to see what happens with Amanda Serrano and Miriam Gutierrez. A win by the American fighter sets up a massive showdown between two of the very best fighters.

Few expected Sharipova to cause a problem for Taylor and there were not many moments to prove otherwise.

Estrada took two world titles away from champions this year. First, the East L.A. fighter ripped the WBA minimumweight title from Mexico’s Anabel Ortiz last March. Then, Estrada out-fought Japan’s Tsunami Tenkai for the WBO light flyweight title in one of the best female fights of the year.

She’s dropping down to minimumweight to defend against Santizo in a fight scheduled for 10 two-minute rounds. It was hoped that it would be three-minute rounds but that won’t be the case.

In the flyweight fight, Marlen Esparza makes her first WBC flyweight title defense against Anabel Ortiz who is moving up two weight divisions to make the challenge. The fight is set for 10, two-minute rounds.

The WBC does not allow three-minute round fights.

Esparza has her next set of opponents all primed and ready like a pool table with the balls all racked. If she passes Ortiz, she has Japan’s Naoko Fujioka with the WBA flyweight title ready to go. There also is Arely Mucino who edged Jacky Calvo in a riveting fight this past month in Anaheim. Then, there are other flyweights or possible foes like Argentina’s Yesica Bopp and Seniesa Estrada if she decides to move up.

Esparza, a Olympic medalist, has numerous options and the willingness to fight each and every one.

“I love fighting in the pros,” said Esparza.

Marianela Ramirez (8-7-1) was the winner by majority decision after four rounds against Lorena Agoutborde (1-1-1) on Saturday Dec. 11. The featherweight bout was held in Cordoba.

Sofia Rodriguez (4-5) won by knockout in the fourth round against Elizabeth Britos (1-11-1) on Friday Dec. 10. The lightweight match was held at Buenos Aires.

Emma Gongora (2-2) was the winner by decision after six rounds against Marija Zivkovic (1-8-1) on Friday Dec. 10. The super lightweight fight took place at Marseille.

Nanako Suzuki (6-2) won by split decision after six rounds against Sayo Segawa (1-2) on Thursday Dec. 9. The minimumweight fight was held at Tokyo.

Ai Sugimoto (3-2) knocked out Ai Kuwahara (0-1) in the fourth round on Wednesday Dec. 8. The flyweight fight was held in Tokyo. Also, Mika Yagio (1-1) knocked out Asako Sugawara (0-1-1) in the second round in a featherweight bout.

Czarina McCoy (9-0) knocked out Ana Guevara (2-4) in the fifth round on Friday Dec. 10. The super flyweight bout took place in Monterrey.

Angelika Krysztoforska (3-0) knocked out Tetiana Perevezentseva (0-4) in the third round on Friday Dec. 10. The super flyweight bout took place at Zukowo.

Dialika Perkins (1-1) knocked out Alexis Martinez (0-4) in the second round on Friday Dec. 10. The atomweight fight was held at Glendale, Arizona.