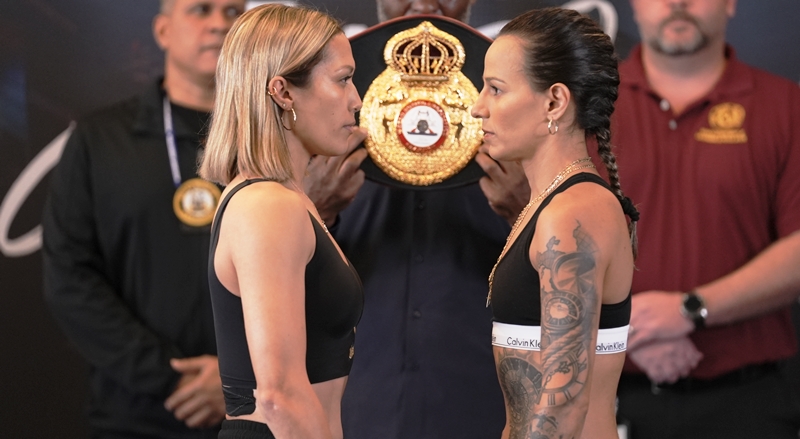 The dream of every fighter around the world is to fight in the United States.  That dream will be a reality for Guatemala’s Maria Micheo Santizo this Saturday night when she puts up her undefeated record for a chance at a world title.  It will not be easy since across the ring from her will be current WBA minimum world title and unbeaten Seniesa “Super Bad” Estrada of East Los Angeles, California.

“This is what we have been working for, we have trained to win,” Micheo Santizo stated in an exclusive interview with ThePrizeFighters.com.  “On Saturday night we are going to see the work we have done with that goal in mind.  Right now we are very focused in this fight.  We have plans but to speak of that is illogical, right now we are looking to beat one of the best current female fighters. We are going to give a great fight; we are coming for war.”

“What I can assure the public is that this will be a great fight,” she continued.  “We are going to leave our heart in that ring and we will give the fans a surprise.”

The 36-year-old Micheo Santizo, the oldest of five sisters, began in combat sports practicing karate for most of her life.  With that founding experience in karate, she switched to boxing later in life and fell in love with the sport.  Soon thereafter she founded a boxing academy in her native Guatemala.

She jumped whole heartedly into the sweet science amassing more than 100 amateur fights.  Since there is no professional boxing in Guatemala, she decided to make her pro debut in Mexico in 2018.

“At first we were a bit nervous, unsure of ourselves,” Micheo Santizo said her first fight with smaller gloves and no head gear.  “I remember it was in a bull ring in Jalisco. In that same venue is where Saul ‘Canelo’ Alvarez also made his pro debut.  It was only my trainer and myself.  It was strange to fight without head gear.  Fortunately, everything came out our way.”

After a string of wins Micheo Santizo captured the vacant WBC International female minimum title in her native country, the only bout she has fought in Guatemala.

“That was a different type of nerves,” she remembers. “It was the first time I was going to fight in front of my audience, my whole family was there, all my country men, all my students. It was a different feeling.  We didn’t know how many people were going to go since boxing is not that popular in Guatemala.”

“Despite that, we had a sellout,” she stated.  “I was the first woman from my country to challenge for title of this level. Even though I didn’t have too many fights, the WBC approved this fight because they had seen me fight before and felt I was ready for it.  My opponent was Cynthia ‘La Tormenta” Martinez, a tough and strong fighter.  I won a unanimous decision and it was a great fight for Guatemala.”

“I met Maria in a ring,” she said with a smile.  “I was asked if I would spar with her.  I was heavier back then and she was much smaller and I was surprised how strong she was.  I did some research on her after that and I joined her academy and we developed not only a friendship but a working relationship as well.”

The team is an interesting one since it is not every day you see a female fighter trained by another woman.  They find that it suits them perfectly.

“We are looking to break stereotypes,” Micheo Santizo said.  “We believe in equality.  For my country it is a historic for me to challenge for a world title and I think it is historic for boxing for a woman to climb into a ring with a female trainer in her corner.  We want to make history together.  We want to prove that woman can do anything we set our minds too.”

Just like Maria says, I think that women can be as strong, as intelligent and as capable as male boxers,” Rhoesa seconded her fighter.  “I think this has been proven but it has not been easy.  We have discovered when women look to work as a team we can be very strong.  That is a message we want to send to women, if we work together we can achieve great things.  This is a great opportunity for Maria but for me as well.”

Together they would look to accomplish what would be the biggest upset in female boxing at least for this year, beating the undefeated and pound for pound top ten Seniesa Estrada.

“She is a great fighter, undefeated, a world champion,” Micheo Santizo said of her next opponent.  “We have been looking for this fight for some time now.  I think we have a good team and we are ready for it.  I am very motivated to be able to face her and showcase what I can do.  I am very prepared for this fight.”

“It is not clear yet if we are going to fight three-minute rounds,” Micheo Santizo said.  “I am prepared to fight four-minute rounds.  We signed the contract for three minutes but we are waiting to see what the local commission approves.”

Trainer Marisol Rhoesa was more specific on what needs to be done to be victorious on Saturday night.