Marlen Esparza vs Anabel Ortiz
Written by: David A. Avila 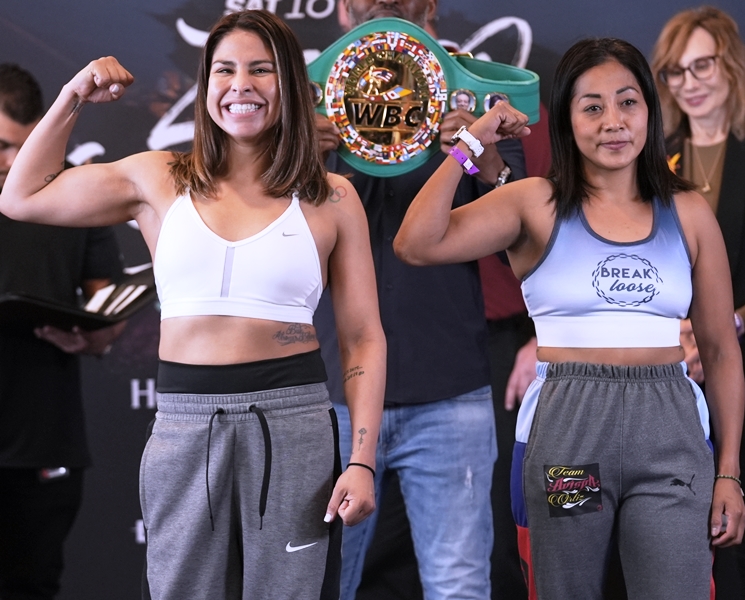 It has a magical ring to it and though she’s accomplished incredible amateur success representing the USA, it’s even better boxing as a professional.

It’s Esparza’s first world title defense since defeating another Mexican warrior in Ibeth “La Roca” Zamora last June in El Paso, Texas. Despite getting knocked down early by the multi-division world champ from Mexico, Esparza rallied to rack up round after round and win by close decision.

That perfectly exemplifies Esparza. Challenge accepted. Knock her down and she will rise up and fight. Challenges and obstacles seem to put a gleam in her eye.

Back in 2017, when Esparza signed a lucrative contract with Golden Boy Promotions, few boxing observers and experts could predict the future of women’s prizefighting. Not even Nostradamus could foresee what lie ahead.

Though Esparza continued to push for three-minute rounds fights, no one was willing to meet her in the prize ring under that time format until she met Seniesa “Super Bad” Esparza on Nov. 2019. Both are promoted by Golden Boy and both eager to push the limit toward improving the female fight game.

“We all know that I love the three-minute round,” Esparza said.

However, the WBC does not share the movement to change from two-minute rounds to three-minute rounds. They forbid the extra minute on any of their sanctioned fights. Esparza accepts their rules and will meet Ortiz in the two-minute format.

Ortiz, 35, is moving up two weight divisions to combat Esparza for the flyweight world title. It’s a hefty jump for the Mexico City fighter who dominated the minimumweight category for many years. But she lost her WBA minimumweight title to Seniesa Estrada and is not ready to quit.

“It’s a new challenge in my career, moving up in weight,” said Ortiz. “I am always challenging myself to fight the best to be the best.”

Over the years Ortiz has never refused big fights against the best women fighters in the world such as Carina Moreno, Naoko Fujioka, Yesica Bopp, Etsuko Tada and Estrada. Now she’s eager to meet Esparza.

Not only fans in Texas await their confrontation but fans around the world and other elite fighters waiting to challenge the winner. Esparza believes it will be her.

“Anabel is someone who is really going to bring something, she is a counter-puncher and seasoned fighter. She is someone we need on the resume,” said Esparza eager to protect her first world title. “She has experience.”