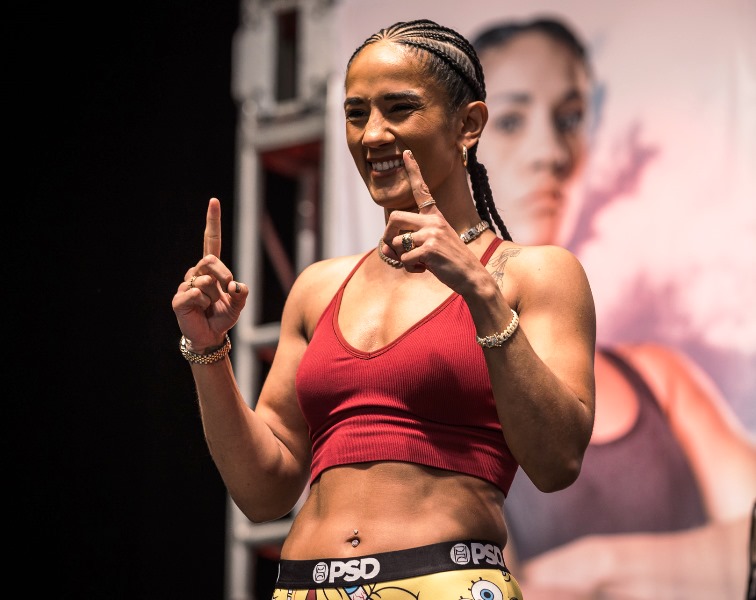 Seven-division champion Amanda “Real Deal” Serrano (42-1-1, 30 KOs) moved back up to 135-pounds and proved that fighting the bigger Miriam Gutierrez (14-2) was not a problem in winning decisively by unanimous decision after 10 rounds.

Will undisputed lightweight champion Katie Taylor be next?

Serrano (42-1-1, 30 KOs) was easily the faster puncher and though she was the smaller fighter she maintained her pressure style behind her southpaw stance and walked down Spain’s Gutierrez (14-2) to dominate in the win at Amalie Arena in Tampa, Florida.

Gutierrez, who was slightly taller and looked physically stronger, seemed to adapt to Serrano’s punching power after two rounds. But despite being physically bigger, she was hesitant about fighting on the inside. She kept a distance and seemed more concerned about not allowing the Puerto Rican slugger to target her body.

Round after round Serrano battered Gutierrez and the Spanish fighter’s face began to swell and show redness. But she also began to catch Serrano occasionally with punches, but never enough to hurt and hinder the Boricua’s attacks.

Serrano seemed to catch her rhythm in the fifth, sixth and seventh rounds by switching attacks and staggering Gutierrez in each of those rounds. But the Spanish fighter never wavered or seemed close to quitting. But Serrano was imposing her dominance.

Gutierrez remained steadfast in trying to catch Serrano with a knockout blow. Though she occasionally connected with punches throughout the fight, it was never enough to stun Serrano who bore through them with disdain in the ninth. But it may have been Gutierrez’s best round.

The final round saw Serrano open up with little concern of Gutierrez’s incoming blows and scored with body shots and right hooks. Gutierrez fought back but seemed unable to deter Serrano’s attacks. Their faces told the story as Gutierrez eyes were both swollen and cheeks red while Serrano had bruising but it was minimal.

Serrano and Katie Taylor could be arranged for a showdown in March or April next year, possibly in New York City. It looks to be the greatest female fight in history. Both fighters are highly ranked in most pound for pound lists.