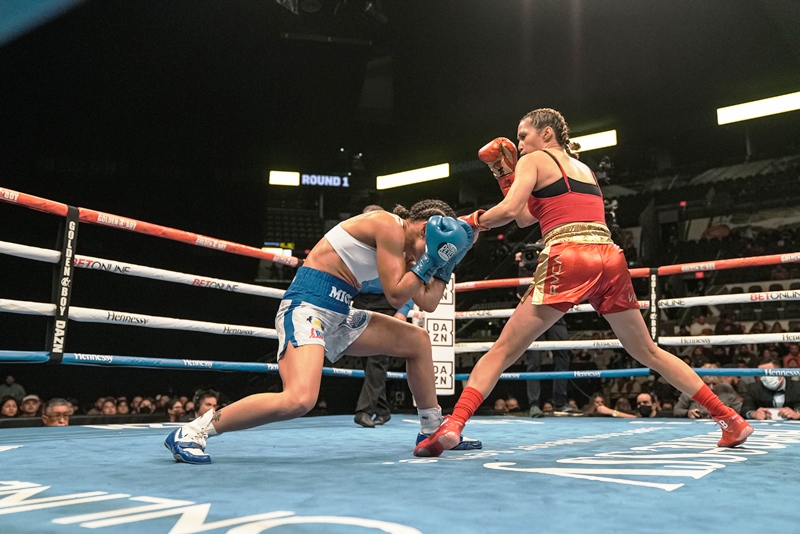 Current WBA 105-pound Seniesa “Super Bad” Estrada (22-0, 9KO) scored an impressive knockout over previously undefeated Maria Micheo Santizo (9-1, 5KO) of Guatemala in the fourth round of a scheduled ten.  The championship bout was the semi-main event from San Antonio, Texas, and presented by Golden Boy Promotions on DAZN.

Micheo Santizo, 36, did not looked overwhelmed at first, despite her lack of experience.  Going pro only three years ago after 100 amateur fights, most of her pro fights were fought in Mexico since boxing in her home country of Guatemala is nearly non-existent.  Having been the promotor of her first nine fights as a pro, the collected record of her previous opponents was 21-18-4.

Now she was facing Estrada, a bona fide top 10 pound for pound professional fighter who has been fighting since the age of eight.

It was surprising Estrada’s strategy as she came out fast and furious at the opening bell.  After a several seconds, it was evident the Los Angeles native had no respect for the skill or power of her opponent and was looking for the early knockout.

Santizo was unfazed and looked calm as she weathered the early storm and scored a number of flush over hand rights to the face of Estrada early on.

By the second round, they fell into a pattern where Estrada unleashed very fast combinations to the body and head of the Guatemalan while Santizo looked to counter.  At times the Central American looked to be first but Estrada would quickly counter.

Early in the third Santizo scored her best punch of the night, a hard over hand right that stopped Estrada for a second, but not enough since a couple of punches later Estrada dropped Santizo with a left hook to the chin.

Micheo Santizo beat the count but looked hurt.  Estrada went after her prey and with 10 seconds to go in the round scored another left hook to the body followed with a straight right that made Micheo Santizo reel against the ropes.  Estrada looked for the finish but ran out of time in the two-minute round.

Estrada didn’t need to wait too long because in the following round in the southpaw stance she scored a huge over hand left sending Micheo Santizo sprawling down to the canvas.  Micheo Santizo quickly got up to one knee, but the referee waived off the fight with no protest from the challenger or her corner.

The official time was 1:51 of the fourth round.

“I rate myself a C. My trainer told me to be patient,” Estrada said in the post-fight interview.  “I knew I was going to knock her out, but I was trying to do it too early.  I envisioned that punch to knock her out and I did.”

As far as what is next, Estrada seems to have her next fight penciled in, “my goal is to unify with the IBF champion of Costa Rica, Yokasta Valle, that is going to be my first fight of 2022.”

The scheduled championship ten-round bout was the opening televised fight on DAZN of the Golden Boy Promotions event from the AT & T Center in San Antonio, Texas.

The 32-year-old Esparza captured the green and gold 112-pound strap in her last fight defeating the long-reigning Ibeth “Roca” Zamora via unanimous decision in June.  Ortiz, 35, lost the title she had held for nearly 10 years in March losing a lopsided decision to current champion Seniesa Estrada.

The fight against Esparza was Ortiz’s first fight since that loss.

Esparza’s advantage in height and overall size was evident from the moment both women jumped into the ring let alone when they squared off after the first bell.  Esparza quickly used her reach advantage to score several jabs, doubling and tripling, keeping the shorter Ortiz at bay.

In the second Ortiz began to get more aggressive looking to get on the inside but thanks to the completely incompetent third main in the ring, Angel Mendez, it proved to be counterproductive.  As Ortiz inched herself closer, Esparza unleashed a left hook to the liver coupled with one to the head.  The head shot was long wrapping her arm around Ortiz’s head, pushing her down.  Mendez erroneously called it a knockdown despite Ortiz’s protests.

If that huge mistake by referee Angel Mendez was not enough, he did it again in the fourth.

After a couple of rounds of Ortiz still battling to get on the inside, she again got in to close with Esparza going to left hook on top again.  This time, Ortiz didn’t go all the way down but her right glove touched the canvas.  Incredibly referee Angel Mendez called it a knockdown again to the dismay of everybody in the arena, not much so than Ortiz who could smile and shake her head.

In the second half of the fight Esparza kept working her fight of quick combos to the head and body despite Ortiz, on the suggestion of her corner, began to dirty up the fight.  With Esparza slowing down a bit, Ortiz had more success getting on the inside and once there scoring looping hooks to the body of Esparza.  Esparza would hold and Ortiz di not stop punching including to the back of the head of Esparza.  The referee warned her a couple of times of the foul but by then Ortiz had lost all respect for Angel Mendez.

Ortiz had her best moments in the last three rounds of the fight, but it wasn’t enough to make a difference in the fight or perhaps in those rounds since Esparza dominated the action for the majority of the ten rounds.

Despite Esparza’s obvious domination, one judged scored it a close 95-94 while the other two had it a more logical 100-88 and 99-90 respectively, all three for Esparza who was making the first defense of the WBC flyweight title.