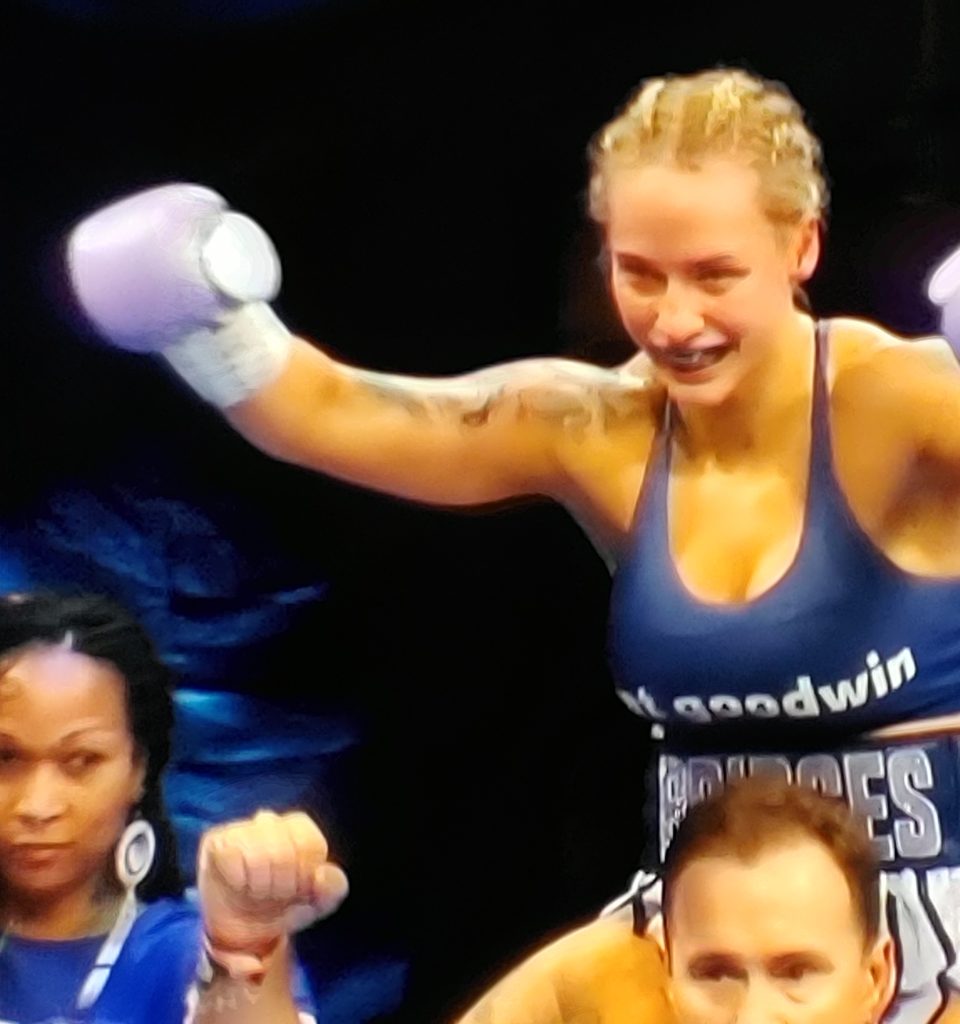 That popular blonde Ebanie Bridges led an Aussie assault in England and out-worked Maria Cecilia Roman to take away the IBF world bantamweight title by unanimous decision on Saturday.

Yes, she can fight.

Australia’s Bridges (8-1, 3 Kos) eager to prove her mettle, quickly gained the upper hand and defeated Argentina’s Roman (16-6-1) in front of a boisterous crowd at First Direct Arena at Leeds, England. It was a Matchroom Boxing card.

It was Roman’s sixth defense of the title she won in 2017 against fellow Argentine Carolina Duer who was in her corner.

Known as the “Blonde Bomber,” Bridges jumped out in front quickly in the opening round as Roman stood in front behind a high Winky Wright guard. It allowed Bridges to unload with a variety of combinations that pierced the defensive guard of Roman.

The first five rounds saw Bridges blitz in front with Roman rarely attacking and allowing the Aussie fighter to take the lead. It was a strategy that seemed to backfire unless it was devised to tire out the blonde fighter.

Bridges mixed up her attack and began feinting and fighting from a distance. That seemed to confuse Roman slightly. It also convinced the Argentine fighter to become more aggressive.

Finally, in the seventh round, Roman became more aggressive and unloaded her own five-punch combination. And then followed up with another two-punch assault. Bridges returned fire with a five-punch combo of her own. But Roman was intent on being the busier fighter and ended the right with an overhand right. It was her first round that could be given to her on the judges score cards.

Argentina’s Roman ramped up her offense from the eighth round on and finally fans and observers could see how she was able to be the longest-reigning bantamweight champion in the world. Her ability to fire combinations and counter were finally on full display.

Bridges was not allowing Roman to change the momentum.

Though Roman had seemingly won the seventh and eighth round, Bridges seemed to get a second wind and began the ninth round with a double left hook that seemed to slow Roman’s step. Bridges unloaded a four-punch combination to the body and head just in case Roman wanted to return fire. It took awhile for the Argentine to find an opening. But it was not enough.

The final round saw Bridges open up again with left hooks but this time Roman knew she had run out of rounds and decided to stand and fight. Both bantamweights let all guns open up and Roman seemed to get in the final blow and possibly win the round. Would it be enough to retain the title.

One judge scored the fight 100-91 and two others 97-93 all for Bridges, the Aussie schoolteacher New South Wales.

“I’m very proud of myself,” said Bridges. “It means everything I sacrificed has been worth it.”

Australia’s other representative Skye Nicolson returned to the boxing ring in less than a month after her pro debut in the USA, and in that meager time showed off a much improved fighting style.

The southpaw Nicolson (2-0) battered Bec Connolly (3-12) six rounds in a featherweight fight that showed off a more pro-style. Unlike her pro debut that saw the tall Aussie fighter slap and run, in this fight she shot ramrod jabs and punishing lefts through the guard of the British fighter.

It was riveting stuff and showed off Nicolson’s athleticism and power. No need to run around the ring with that kind of ability. Nicolson won 60-54 and showed she can make big waves in the featherweight division.