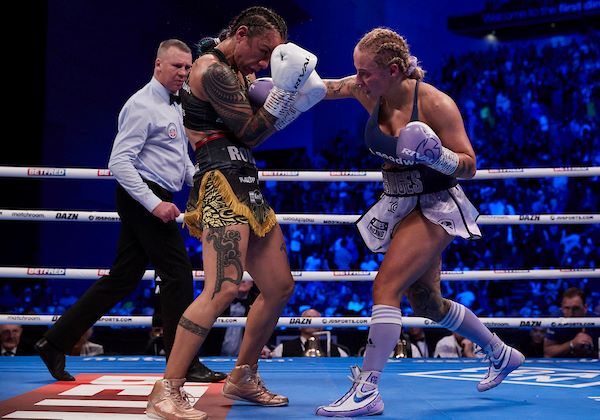 Several marquee women fought world title fights and battled for contender status in England, Costa Rica and Mexico. There was good and bad that happened.

A hearty congratulations to Australia’s Ebanie Bridges who banged out a win over Argentina’s Maria Roman to rip the IBF bantamweight world title away from the former champion in Leeds.

If you previously saw her epic fight with Shannon Courtenay a year ago in her first world title attempt, or the battle against Mailys Gangloff last September, then you had to expect the Aussie to blaze to victory in her typical aggressive and technical style.

Bridges didn’t change her style but added more hit and slip to her attack and that led to a convincing victory over Roman who had been the longest reigning bantamweight champion. The bantamweight division has depth and talent beginning with Denmark’s Dina Thorslund and America’s Jamie Mitchell who defeated Courtenay and finally there is Mexico’s Yuliana Luna Avila who fights this weekend.

Expect some exciting battles with any of those fighters later this year. They can be made.

One drawback in the England fights was watching women enter the ring with protectors around their abdomen. It’s not ok.

For those not familiar with protectors, they are rubber-like body shields strapped around a person’s waist and are worn above the waistline to prevent body shots.

Wearing protectors during sparring and workouts poses no problem. But wearing them during a fight should be against the rules. Protectors, especially as Maria Roman wore in the world title fight should not be tolerated. Body shots are an important part of boxing and if protectors are covering the stomach area, then my question is why are you fighting?

If you need to wear a protector to prevent body shots, you are not a fighter. You are a poser.

Lately many European women and Argentine women have entered prize fights with large protectors taking away any flesh targets.

All boxing bodies should eliminate the protector during a fight. No one should be allowed to enter the prize ring wearing one. Men as well.

If a fighter can’t take a body shot, get out of the game.

An all-female fight card by MarvNation Promotions was led by IBF minimumweight titlist Yokasta Valle who handily defeated Sana Hazuki by unanimous decision. It was the Costa Rican fighter’s fourth defense of the world title she won back in 2019. And usually, the fighter known as Yoka has an exciting style. But against Hazuki she resorted to hitting and holding for the last six rounds.

It was not worth watching again.

Whoever trains her has not taught her how to fight inside. They teach her to grab ahold as a form of defense. This makes any fight boring. Every time Hazuki got within arms length Valle would grab the Japanese fighter’s arms or torso. This wasted at least a minute a round in a two-minute round

Nobody wants to see a fight with a lot of grabbing and holding. Nobody. Boxing is supposed to be about entertaining. Holding is not entertaining.

Another exciting performer was Adelaida “La Cobra” Ruiz who knocked out her foe in three rounds. Ruiz doesn’t like to waste time. As soon as the bell rang she was going for the knockout. That’s entertainment and what fans want to see.

A few years back McCarter had a crack at Cecilia Braekhus but her team turned down the offer as too low. She also had a crack at one of the super lightweight world titlists but did not like the terms of needing to sign with the promoter. All good reasons but time is running out for one of the best if not the best fighter of her generation.

Women’s boxing or prizefighting as I like to call it, has been rocketing up the ladder of recognition. Next month Amanda Serrano and Katie Taylor meet at Madison Square Garden along with Franchon Crews and Elin Cederroos in epic title fights.

England’s mighty Savannah Marshall (11-0) defends the WBO middleweight title against Femke Hermans (12-3) on Saturday April 2, for the WBO world title at Newcastle, England. It can be seen on the SkyGo app.

A win by Marshall sets up the showdown with America’s Claressa Shields to determine the undisputed middleweight world champion. Shields has the WBA, IBF and WBC titles. Marshall has the WBO. Winner takes all.

Marshall is the last fighter to beat Shields and that occurred in the amateurs. She’s held that fact over the head of Shields like a Sword of Damocles. But first, she must defeat Hermans. Many look at this fight as a mere hiccup for Marshall, but anything can happen in boxing.

Evelyn Bermudez (16-0-1) won by technical knockout in the fifth round versus Debora Rengifo (16-9-1) on Saturday March 26. The IBF and WBO light flyweight world title fight was held at Buenos Aires.

Brooke Cooper (2-1) knocked out Karen Te Ruki (3-3) in the third round on Saturday March 26. The lightweight match took place at Carrara, Queensland.

Hanna Hansen (4-0) knocked out Jeanmary Martinez (3-3) in the seventh round on Saturday March 26. The super welterweight fight took place at Dortmund.

Diana Fernandez (25-4-1) won by decision after 10 rounds versus Vanesa Taborda (10-14-3) on Friday March 25. The bantamweight match was held in Ciudad Juarez.

Lianne Bush (3-0) won by decision after six rounds against Karina Szmalenberg (14-49-4) on Saturday March 26. The lightweight bout was held in Nottingham, England.