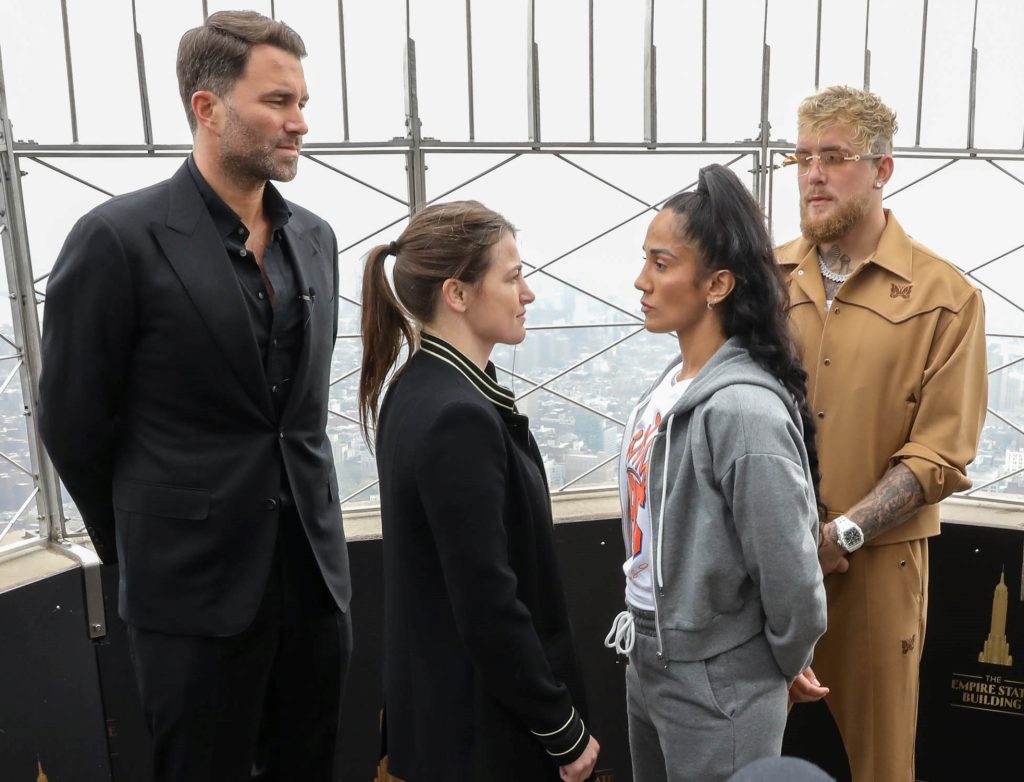 Thousands of fans are descending on New York City to witness the most anticipated fight in recent times between Amanda “The Real Deal” Serrano and undefeated Katie Taylor for the lightweight world championship.

Prize fights involving female boxers do not get bigger than this.

It’s been more than a century in the making to finally witness two women enter the prize ring knowing each will receive at least $1 million dollars to fight each other. Taylor and Serrano are also the main event on the Matchroom Boxing and Most Valuable Promotions.

“It was like wow. I still don’t feel it,” said Serrano about signing a contract guaranteeing $1 million to fight each other. “But both me and Katie Taylor deserve that million dollars. We worked so hard.”

Taylor blazed her way to glory after winning gold at the 2012 London Olympic Games. Though not as successful in 2016 Rio Olympics, she was signed by Matchroom Boxing and quickly guided to main event status by promoter Eddie Hearn. Speed, aggressiveness and technique are her gifts.

Serrano had a longer more arduous pro career that saw her slowly climb to relevance despite creating one of the most feared knockout punching reputations in the women’s fight world. She was recently spotted and backed by social influencer slash fighter Jake Paul the head of Most Valuable Promotions. Quickly she ascended to star power relevance.

“I’ve always said it takes a young guy, a YouTuber, influencer to come over to the sport of boxing and change it,” said Serrano about her new promoter Paul. “The most I ever made before was $5,000 for Maria Maderna in Argentina.”

In Taylor’s case it was Matchroom’s Hearn who never hesitated to ferry the Irish fighter across the Atlantic Ocean and spotlight her to American audiences aside from those in the United Kingdom. He also recognized the value and possibilities of women’s boxing and paid them well.

Taylor was the first woman in professional boxing to fight for a million-dollar purse and deservedly so. With slippery moves and hummingbird speed she rarely finds opposition able to give her pause for thought. One fighter that catapulted Taylor to elevated status were two bloody slugfests against Belgium’s Delfine Persoon. The second match saw the Irish fighter allegedly sign for $1 million.

Now Taylor has once again signed for the magic number.

““This is a massive night for boxing,” said Hearn.

No female championship fight has previously been worthy of headlining at Madison Square Garden. Nor have two champions both signed contracts worth more than $1 million each. Never before in women’s boxing has a mega fight of this degree occurred.

Perhaps the closest a match of Serrano vs Taylor magnitude would have transpired in the early 2000s when Laila Ali roamed the super middleweight division as the undefeated queen. The other recognized queen was Ann Wolfe the vaunted power slugger who lost only once. But despite an anxious public, the two best fighters of their era never fought each other.

The other mega fight that slipped through the mists was Christy Martin versus Lucia Rijker. Top Rank signed both for the fight, a poster was made that I still possess, and the fight was headed to Las Vegas when an injury to Rijker tripped up the fight. It was never re-scheduled suggesting that the promoter decided not to stage the fight for whatever reasons. They never fought each other.

No other mega fights gained as much attention as the two just mentioned.

Ali will be in attendance for the Serrano-Taylor fight at Madison Square Garden.

“I called the 2012 Olympics,” said Ali who worked as a TV analyst for boxing in the London Olympics. “Katie Taylor is exceptionally talented. Her speed and timing amazing amongst many other skills.”

The retired former champion has also seen Serrano fight numerous times and has been impressed with her skill set.

“Amanda Serrano is a very well-rounded fighter,” Ali said of the Brooklyn fighter. “She puts her punches together well and has good power which makes her dangerous.”

Ali, whose father Muhammad Ali fought Joe Frazier at Madison Square Garden back in March 1971 in the match called the “Fight of the Century,” said though this fight is not the same magnitude, it does have importance for women’s boxing and she will be attending the clash of champions.

“I thought it was important for me to support,” said Ali. “It’s going to be a great fight for women’s boxing.”

It’s been three years in the making. Taylor versus Serrano is finally here.

Marianela Ramirez (9-7-2) knocked out Lorena Agoutborde (2-2-2) in the first round on Saturday April 23. The featherweight bout was held in Cordoba.

Laura Wollenman (3-1) knocked out Nilsy Santodomingo (0-1) in the first round on Friday April 23. The bantamweight fight was held in Galapa.

Noa Sakamoto (1-0) beat Runa Nishihata (0-2) by decision after four rounds on Sunday April 24. The atomweight fight was held in Osaka.

Aratwa Kasemang (1-0) beat Raider Muleba (4-14-1) by decision after six rounds on Thursday April 21. The lightweight fight was held at Johannesburg.