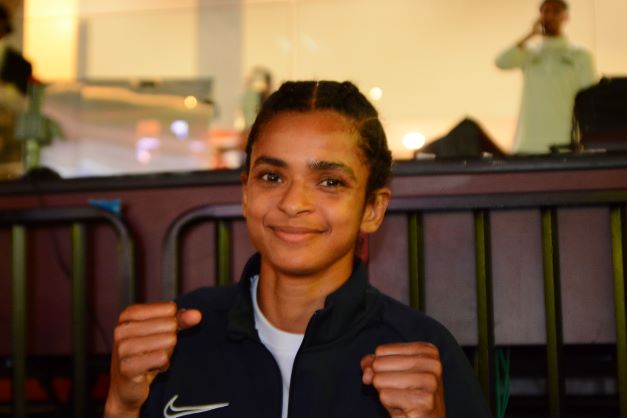 Undefeated Ramla Ali (5-0) returns to action and faces Augustin Belen (6-1) at the O2 Arena in London, England on Saturday July 9. Her adopted country will get their first glimpse of the former Olympian since she moved to the USA to learn a new pro style. DAZN will stream the Matchroom Boxing fight.

How much has changed for the Somalian native?

It was just four months ago that Ali entered the ring in black Nike shorts, the sides and belt sequined in royal purple at the Galen Center in Los Angeles to meet Shelly “Machine Gun” Barnett.

The audience was sparse as the two featherweight fighters opened the Golden Boy promotions and DAZN event.

The 8-round bout was instantly led by a poised Ali. Barnett, a veteran professional compared to her opponent, was instantly met with formidable force. Ali was precise with every decision, working behind her jab as it quickly morphed into a combo. Ali focused on Barnett’s body before working her way up. Barnett’s inability to counter was met with consequence as she instantly fell over at 1:18 of the first round.

Barnett rose before the final count with a slight daze. Immediately after resuming, Ali whipped Barnett’s head back with another punch as she continued to attack her opponent. It’s clear in Ali’s approach that every attempt on her behalf must count, accuracy atop all.

As the final seconds of the first round approached, Barnett was dropped again with what appeared to be a powerful right hand. The round ended with a stunned Barnett who quickly rose once more, telling the referee she was well enough to continue.

Ali’s precision is unmistakable as she used her lengthy arms to her advantage, only ever moving close enough to land her shot. Patiently waiting for the perfect moment to strike, Ali could be seen sitting on her punches as she keeps a variation in her combinations.

As the second round commenced, Ali continued to attack her opponent, attacking her with vicious heavy hitter combos. Ali maintained her distance as she kept her opponent at bay.

Barnett endured impact in every direction for what seemed like the entirety of the short round before referee, Ivan Guillermo, was forced to bring the bout to an end. The final result, a KO for Ali under California state rules.

It was Ali’s 5th undefeated victory and first professional knockout, a victory she recognizes her trainer Manny Robles for.

“It’s coming from working with Manny… who says don’t rush, take your time, a knockout will come on its own,” said Ali.

The versatile boxer has been in Los Angeles almost 7 months, sharpening her skill outside of her comfort zone and away from distraction. Ali’s transition to Los Angeles wasn’t as easy as she makes it appear, but the dedicated fighter flew across the world with a game plan; find a trainer, find sparring partners and learn.

The fighter’s home team in the UK were unable to travel to Los Angeles with an inconvenience that worked in her favor. Unable to be by her side, Ali and team reached out to Manny Robles, the trainer behind some of the toughest names in boxing.

“She’s got that amateur style so they brought me in to get her to settle down and get her to be more aggressive and make her punches count.. go to the body,” said Robles who’s trained world champions like Andy Ruiz, Oscar Valdez and many others.

Although Ali moves around the ring like a beast herself, the boxer stated the stark differences in training from the United States to England, telling Uppercut Magazine and the Prizefighters.com,

“Americans train like complete animals, I wasn’t used to the level of training.”

A major victory for Ali under Robles, the boxer intends to stick around Los Angeles to train more. Outside of the ring Ali has already made a name for herself with some of the most notable luxury brands.

From high fashion model to undefeated Olympian boxer, Ramla Ali is paving the way in both directions for women, beauty and sports. The Somalian born fighter and her family fled Somalia’s war state and found refuge in London, the only home country Ali can remember.

The traumatic beginning to Ali’s early life contributes to her lack of an actual age, pinning her somewhere in the first or second year of her 30’s, possibly younger.

Ramla Ali is a rising name in women’s boxing, a sport she’s been in love with since she was about 12 years old. Ali’s immersion into the world of boxing came after being bullied in grade school for her weight, finding fitness and power in the male dominated sport.

Ali has been breaking records in boxing for years prior to her professional debut. The orthodox fighter became the first Somali boxer at the 2021 Tokyo Olympics, navigating the obstacles of competing for a severely impoverished country that has never won an Olympic medal.

The fighter who turned professional in 2020 wasn’t and still isn’t entirely supported in the sport, something she kept secret from her family before her Olympic performance was televised.

The female warrior is as interesting to see in fashion shoots as she is in the ring, captivating both audiences with her natural abilities to stun.

Ali isn’t just a pretty face with a sharp pair of fast hands, the Somalian is an activist, using her skill sets as a way to equip less fortunate women with a form of defense.

In 2018, Ali launched a nonprofit organization; The Sisters Club, a free self-defense class for  women in her hometown in London.

In 2019, Ali worked with UNICEF, traveling to the Za’atari refugee camp in Jordan where she taught young girls to box.

The accumulation of trades doesn’t stop with boxing, modeling or activism; the Jaqueline of all trades is an author, publishing Not Without a Fight, her first self-help memoir in 2021.

The gracious model- boxer- author- activist serves as her main intention, as an inspiration to girls around the world. Whichever craft the star dabbles in she succeeds, making it clear that beauty, brains and athleticism aren’t mutually exclusive.

On Saturday, Ali returns to show new layers to her game.

“Everybody knows she’s a supermodel and she’s beautiful, but the most important thing is that she can fight,” said Robles her American trainer.