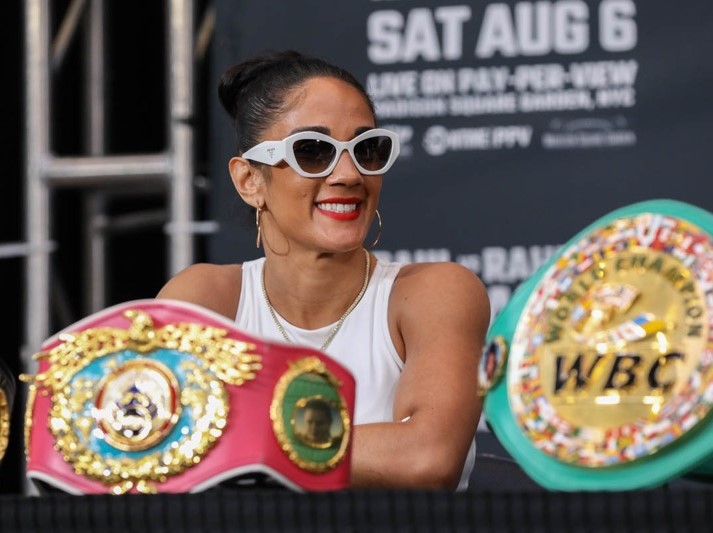 If you have the right mixture.

Serrano, perhaps one of the greatest female fighters to ever lace up, will defend the featherweight titles against Argentina’s Brenda Carabajal. Paul will fight Hasim Rahman Jr. in a cruiserweight fight on the co-main event.

It’s a lethal combination that has sparked other similar events around the country.

“Amanda’s fight at the Garden with Katie Taylor was the first women’s fight in history to headline at MSG and it delivered,” said Stephen Espinosa, head of Showtime. “They drew a huge crowd and gave a fantastic fight.”

Serrano gave kudos to her manager/promoter Paul who since signing her has guided her to million-dollar fights. She admits being slightly spoiled.

“We get to show that we’re fighters,” said Serrano, a seven-division world titlist. “I went up to 135 my last two fights…I’m a legitimate featherweight and that’ why I need to defend these titles.”

Serrano and Paul have proven to be a hit.

Tickets can be purchased on AXS.com.

Howling, 24, is based in Calgary, Canada and joins several other top rated female fighters that include Hannah Gabriels, Estelle Mossely and Dina Thorslund. All three are former or current world champions.

“It’s an unsaturated market and it’s on the rise. I know I am going to be seen and I’m going to be able to make waves with the talent that I have,” stated Howling. “Female boxing has never been as hot as it is right now.”

Richard Schaefer, the head of Probellum, said they continue to invest in female boxing worldwide.

Hot prospect Chelsey Anderson (5-0) meets very strong Aida Satybaldinova (6-2-1) in a lightweight clash set for eight rounds in the main event at the Quiet Cannon in Montebello. Another female bout pits super featherweight standouts Elvina White (5-1) and Jessica Juarez (3-2) in a six-round affair. Both fights should be outstanding while they last.

Two days later, in Commerce, Calif. which is located on the south border of East L.A. super flyweight contender Sulem Urbina (12-2-1) fights Jhosep Vizcaino (10-9) in the co-main event of the Elite Boxing Promotions at Commerce Casino on Aug. 6.

Urbina has come close to winning world titles but fell short. Based in Phoenix, she brings a lot of heat and action to any fight and is highly ranked by all sanctioning organizations.

Francia Bravo (20-5-2) won by knockout over Luiza Meza (0-6) in the fourth round on Monday July 4. The super lightweight fight was held at Cienaga.

Martina Righi (2-1) won by technical knockout in the fourth round over Evelin Camporeale (1-1-1) on Thursday July 7. The lightweight fight took place at Toscana.

Katie Healy (5-0) won by unanimous decision after 10 rounds versus Matshidiso Mokebisi (15-10-1) on Friday July 8. The super bantamweight title fight was held at Middelburg.

Sheila Martinez (3-3) won by decision after eight rounds versus Eva Cantos (4-6-1) on Saturday July 9. The featherweight fight was held in Valenciana.