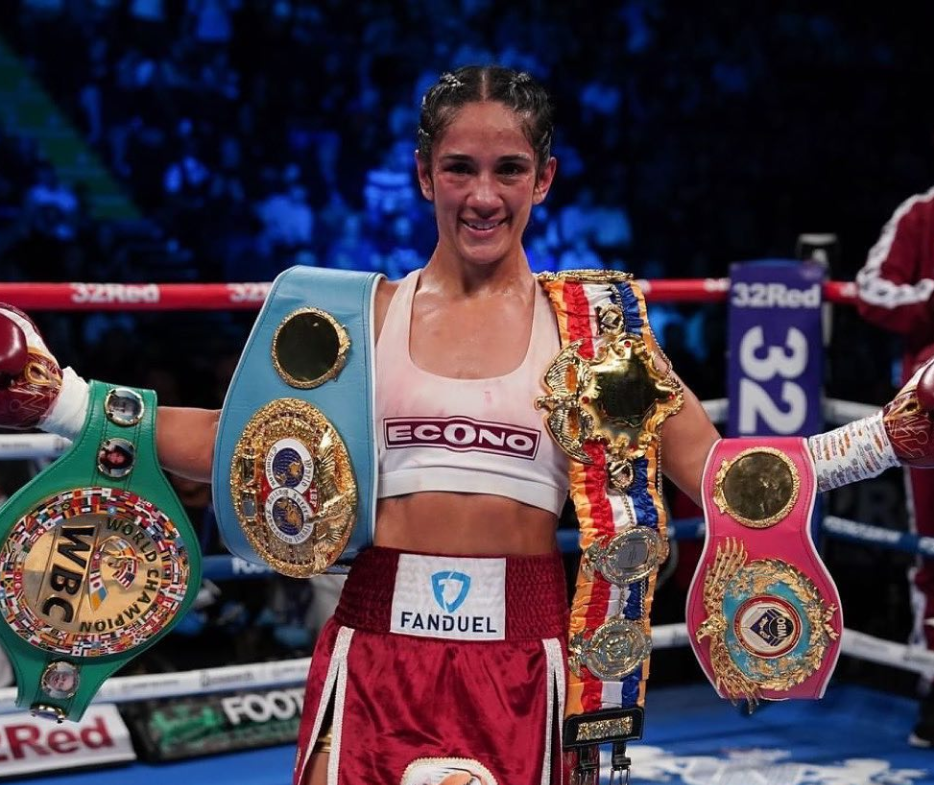 Amanda Serrano showed her overwhelming skills to snatch another featherweight world title and England’s Terri Harper proved a higher weight class was her rightful place in winning a world title again on Saturday.

Each fight took place in different cities in England.

A mere five months after her epic battle in New York, seven-division world titlist Serrano (43-2-1, 30 Kos) journeyed to Manchester, England and cruised by a tentative Sarah Mahfoud (11-1, 3 Kos) to easily take the IBF featherweight title away from the Danish fighter. It was never in doubt.

Serrano opened the first round slowly at first while measuring the speed and punches of the backward moving Mahfoud. A few punches were exchanged but it was like comparing a bazooka to a pop pistol

In the second Serrano slipped into full-attack mode and the hunt was on. The Puerto Rican southpaw who traded vicious shots with Katie Taylor back in April, did not find that same mentality from Mahfoud. Instead, there were flurries of activity and few connects from the Danish fighter.

Lefts to the body and right hooks to the head connected from Serrano while Mahfoud circled away firing blows that seldom landed and when they did, were mostly touch punches. Never did any of her blows have any power behind them

Still, Serrano paced herself and advanced forward while connecting with her usual rhythm and slipping incoming jabs and rights. Every round was going in the Brooklyn fighter’s favor with little danger from the IBF titlist.

In the sixth round Serrano changed tactics and waited for Mahfoud to attack. But the Danish fighter refused and though she did try to punch she seldom connected. She was more concerned with Serrano’s power than landing a blow.

Unable to entice a shootout with the underwhelming Mahfoud, the WBO, WBC featherweight titlist returned to her earlier hunt and destroy mode. She did not find a willing partner in Mahfoud.

Mahfoud must have been chastised or rallied by her trainer in between rounds, In the eighth round she began to take a few more chances. One thing about the IBF titlist was her ability to take shots. She was caught often by rights and lefts to the head and body and survived. Thirty other Serrano foes did not. It was Mahfoud’s busiest round and she exchanged with the heavy-handed Serrano and survived.

In the final two rounds, Mahfoud shot out combinations but still with inaccuracy. Though the British broadcasters saw her business as an excuse to give her the rounds, they were wrong. Serrano was deadly accurate and Mahfoud was not.

Though the result was never in doubt, the duo broadcasting the fight felt Mahfoud had been largely successful in the last five rounds. In this writer’s opinion she did not win a round. Even the punches she landed were touch punches, never with force.

Serrano was unanimously declared the winner and now has the IBF, WBC, IBO and WBO featherweight world titles.

All that is remaining is the WBA version that Mexico’s Erika Cruz possesses. Can that fight be made?

Former super featherweight champion Terri Harper made the four division jump to super welterweight to defeat Hannah Rankin and grab the WBA and IBO titles by unanimous decision in Nottingham, England. The knockout loss to Alycia Baumgardner a year ago, that is all forgotten.

Yes, she does belong in a heavier weight class.

A thicker-legged Harper (13-1-1, 6 Kos) of England proved she was stronger at the 154-pound limit weight class and faster than Scotland’s Hankin (12-6) in front of a largely pro-English crowd at Nottingham Arena.

“This is what we’ve been aiming for to be two-time world champion,” Harper said.

Harper lost none of that super featherweight speed and was able to connect often with her combinations. Though she never dominated Rankin she often beat her to the punch especially in the early rounds. She was especially effective with a one-two combination followed by a head butt. The head landed often and for all 10 rounds of the fight and caused a large cut on Rankin.

It was a tactic devised to keep Rankin from fighting inside and it worked largely due to the referee’s discretion. One-two and dive in with the head was the formula used to defeat Rankin.

Still, Harper was out-scoring Rankin from the outside. And she did take a big right cross from Rankin that seemed to stun her in the seventh. But she rallied in that same round and connected with her own left hook. Harper proved she could take a power shot from a super welterweight.

After 10 rounds all three judges favored Harper 98-92 twice and 97-93. She now is a two -division champion and could very well be headed to a show down with old nemesis Natasha Jones the WBC and WBO super welterweight titlist.

“We’ve got some history to settle,” said Harper.