Another Look at Jessica Nery Plata and Kim Clavel’s Battle in Canada
Written by: David A. Avila 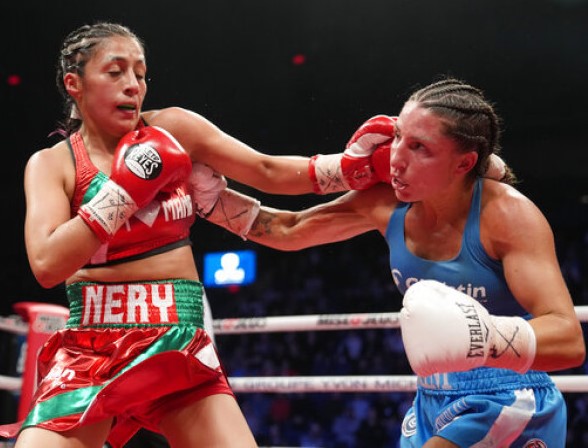 When Mexico’s Jessica Nery Plata and Canada’s Kim Clavel erupted for 10 rounds in a ferocious struggle this past weekend, it put the exclamation point on a division that often gets overlooked.

“It was a devilish fight. Everyone was on the end of their bench in the stands,” said Clavel. “Women’s boxing wins again.”

Welcome to the light flyweights.

Luckily the WBA and WBC unification clash between the two titlists was televised. Otherwise, it would have been, yet another great fight seen only by those in the arena in Laval, Canada. There’s nothing like watching a great fight live.

Though on paper the two champions were described as the same height, it appeared that Nery Plata was taller and had a much longer reach. It may have been my imagination, but it proved to be the difference for the winner.

The Mexican fighter stayed true to her identity as a Mexican pressure fighter and Clavel maintained her hit and move attack style. It was a perfect storm for the unification match and one that was overlooked by many.

If you watched it. You were rewarded with a sure Fight of the Year candidate.

“I’m sad of course, but it’s part of the game,” Clavel said. “It’s a defeat that will have taught me a lot. I’m going to get out of it growing up.”

Often, the smaller weights get ignored but they almost always deliver excitement, especially in world championship fights. Clavel has fought on national Canadian television. This was only her second time performing in front of all of North America including the USA and Mexico.

This was Nery Plata’s second time fighting for television audiences other than Mexico. She did win the WBA light flyweight title in Panama last March against Argentina’s Yesica “La Tuti” Bopp by split decision. It was Bopp’s first loss to another light flyweight in 10 years.

Clavel has a similar style as Bopp so it made sense that Nery Plata would be comfortable meeting the speedy Canadian fighter. Both really shined against each other. It’s definitely a fight that can be made again. Fans love these types of battles and both champions were eager to unload their entire arsenal. They did not hold back anything.

Nery Plata and Clavel did not take a back seat to anyone in their riveting battle that saw both refusing to surrender. Each took big shots and countered with ferociousness. They lit a fire so that the entire world can understand the light flyweights are indeed a talented division at 108 pounds.

Here are some of the other gems in the light flyweight ranks:

Yesica Bopp (37-3, 17 Kos) – Argentina’s star for many years is now 38. She recently moved to Los Angeles, California and seeks to meet any of the American stars now erupting on the scene. She has not lost a fight at light flyweight since 2013 and that was to Jessica Chavez in Mexico.

Tania Enriquez (20-0, 9 Kos) – Mexico’s Enriquez, 25, is the younger sister of Kenia Enriquez and fights out of Tijuana. She has size and power and is a southpaw. Her next fight is March 10 in Buenos Aires, Argentina against Evelin Bermudez for the vacant IBF and WBO light flyweight titles. This should be explosive.

Evelin Bermudez (17-1-1, 6 Kos) – Argentina’s Bermudez, 26, is the younger sister of Daniela Bermudez. She has size, power and is relentless. Bermudez recently lost by majority decision to Yokasta Valle who recently vacated the titles to drop down a weight division. Bermudez will be colliding with Mexico’s Tania Enriquez on March 10. Hopefully this fight is shown worldwide. It should be memorable.

Yokasta Valle (27-2, 9 Kos) – Costa Rica’s Valle, 30, emerged victorious in a battle with Evelin Bermudez last November in Los Angeles for the WBO and IBF light flyweight titles. It was Valle’s biggest win of her career and she decided to drop down in weight to contend for undisputed status in the minimumweight division at 105 pounds. Valle has the WBO and IBF minimum titles too. Standing in her way of undisputed status is Seniesa “Super Bad” Estrada.

Seniesa Estrada (23-0, 9 Kos) – American standout Estrada, 30, has blazed her way to the top of the pound for pound rankings with repeated explosive performances. Many consider Estrada one of the most exciting fighters in the sport. Next, she fights Germany’s Tina Rupprecht who holds the WBC minimumweight title on March 25, in Fresno, California. Estrada holds the WBA title. She formerly held the WBO light flyweight title but vacated to concentrate on unifying all the minimumweight titles.

Tsunami Tenkai (29-13-1, 17 Kos) – Japan’s Tenkai, 38, is very under-rated and has speed, power and tenacity. She has won world titles in the super flyweight and light flyweight divisions. Tenkai gave pound for pound champion Seniesa Estrada her toughest fight two years ago in Los Angeles. She is very dangerous. All she asks is for a chance to showcase her explosive talent.

Other fighters to take heed are Mexico’s Kenia Enriquez and Japan’s Naoko Fujioka. Both can easily make 108 pounds if necessary. They are currently participating at flyweight.

Kenia Enriquez (25-1, 11 Kos) – after the light flyweight division avoided Enriquez at all cost, she moved up to 112 flyweights. Enriquez, 29, can still make 108 pounds and is the last to defeat current unified champion Yesica Nery Plata. She also knocked her down in that win in 2017. The Tijuana fighter remains the most feared fighter below 112 pounds.

Naoko Fujioka (19-3-1, 7 Kos) – Japan’s Fujioka, 47, still remains one of the top fighters in the world pound for pound. She has won titles in five different weight divisions. Fujioka recently fought just above 108 when she clashed with Marlen Esparza. Making light flyweight is not a problem for the great champion from Tokyo. Fujioka is a tremendous athlete.

Jessica Triebelova (2-0) won by knockout in the fourth round over Nana Chakvahvili (7-21) on Saturday Jan. 14. The super middleweight fight took place in Kosice.

Chia Fei Asbury (1-0-1) knocked out Sierra Ramsay (0-1) in the first round on Saturday Jan. 14. The light heavyweight bout was held at Hopkinsville, Kentucky.