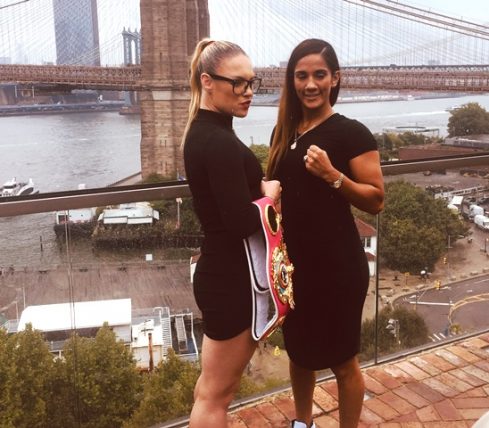 Stars emerge this week with several of the world’s best engaged in classic duels from Japan to the USA in three successive nights.

An all-female tournament called Victoriva erupts in Tokyo as eight women’s bouts are scheduled to take place on Thursday Sept. 12 at Korakuen Hall.

Japan has always been a hot spot with boxing for decades, but in the past 10 years the female boxing scene has burst out especially in the lower weight classes from atomweight to bantamweights.

A classic matchup features Mexico’s Montserrat Alarcon crossing the Pacific Ocean to face Ayaka Miyao for the WBA minimum weight world title. Japanese boxing fans know what to expect whenever a Mexican fighter arrives and vice versa. Japan and Mexico have exchanged many upset wins and losses. Alarcon, a minimum weight, moved up in weight and previously upset flyweight world champion Nana Yoshikawa for the WBO world title in April 2017. Can she do it again at her own weight class?

Seven other matches are scheduled in this tournament that is quickly becoming a fan favorite.

It’s one of the most attractive fights in the world today.

For years the two featherweights who both hail from Brooklyn, New York have trained for years with an eye on each other knowing the day would come when they faced each other in the prize ring.

Hardy, a fighter of Irish descent, has never been defeated in a professional boxing match and her fiery intensity has made her a fan favorite in the New York area. When the fight was announced the female fight world lit up.

“Fans are pretty hype since we’re both from New York City and have a similar fan base,” said Hardy who is defending the WBO title for the first time since winning it a year ago. “The girls (other fighters) are pretty hyped too.”

Serrano, a fighter of Puerto Rican descent, has never lost in the U.S. and has won seven world titles in seven weight divisions. She formerly held the WBO featherweight world title before competing at other weight divisions. The fight with Hardy has tickled her fancy since it was announced.

“I like the way the fight is being sold 50/50 on many estimates,” said Serrano. “It’s the better more competitive fight on the card. Plus, we are both from New York.”

It’s an inner city clash between two of New York’s best female prizefighters and a sure fire candidate for Most Anticipated Fight of the Year.

Look for more on this fight later this week.

On Saturday Sept. 14, the WBC super middleweight world title will be the prize when Franchon “Heavy Hitting Diva” Crews and Mexico’s Alejandra “La Tigre” Jimenez collide at the Dignity Health Sports Park in the Los Angeles area. DAZN will stream the fight.

Crews battled her way to the top despite losing her pro debut by decision to Claressa Shields three years ago in an intense bomb fest. Since that defeat the Baltimore fighter slugged her way to the top and won the WBC world title against Maricela Cornejo a year ago. That win put her on the radar of Golden Boy Promotions who were promoting Cornejo at the time.

Robert Diaz, matchmaker for Golden Boy Promotions said her performance grabbed their attention and they also loved her personality.

“She is an exciting fighter and was impressive in her title fight,” said Diaz. “Everybody was impressed with her.”

Golden Boy Promotions signed Crews this past May and in her first foray with the West Coast boxing outfit she won by technical knockout over Kayla Williams. Now she faces a world champion in Jimenez.

Mexico’s Jimenez is the former WBC heavyweight world titlist but decided to drop down in weight after finding few heavyweights to compete against. The enticement of fighting in the U.S. was also another factor in dropping down several weight divisions.  All but three of her wins came via knockout. She has heavy hands and fighting skills but can she match the speed of Crews?

It’s an interesting match between champions and should not be missed. It looks to be an explosive contest.

We will have more on this fight later this week.

On Saturday Sept. 14, super flyweights Belen Valdebenito (0-1) and Virginia Carcamo (5-10-3) meet in an eight round fight at Rio Negro.

Carolyn Redmond (1-0) knocked out Veronica Diaz (0-4) in the third round on Saturday Sept.7. The super lightweight fight took place at Hamilton, Ontario.

On Friday Sept. 13, super featherweights Jelena Mrdjenovich (39-10-2) and Marisol Corona (11-6-3) meet in an eight round fight at Edmonton. Also, bantamweights Mikenna Tansley (1-0) and Liliana Borquez (2-1-2) meet in a four round fight.

Ikram Kerwat (10-2) defeated Marija Zivkovic (1-2) by unanimous decision after six rounds on Saturday Sept. 7. The super featherweight fight was held in Hamburg. Also, Dilar Kisikyol (1-0) won by technical knockout in the second round over Nana Chakhvashvili (4-13) in a super lightweight fight.

On Saturday Sept. 14, light flyweights Nancy Perez (0-0-1) and Jemmy Bonilla (0-0) meet in a four round bout at Guatemala City.

Felmi Sumaehe (6-0) won by knockout in the ninth round versus Saowaluk Nareepangsri (8-17) on Sunday Sept. 8. The bantamweight match was held in Jakarta.

On Monday Sept. 16, bantamweights Tomoko Okuda (5-2-1) and Kanako Taniyama (2-0) meet in a six round fight for the Japanese title at Sakai, Osaka.

Diana Fernandez (21-3) was the winner by unanimous decision after 10 rounds versus Debani Balderas (10-3-2) on Saturday Sept. 7. The super flyweight title fight was held in Juarez.

On Saturday Sept. 14, super flyweights Arely Rodriguez (1-3-1) and Itzel Reyes (0-3) meet in a four round fight at Guanajuato.

On Friday Sept. 13, flyweights Lisa Whiteside (2-0) and Evgeniya Zablotskaya (8-18) meet in a six round fight at Bolton, Lancashire.

On Saturday Sept. 14, super middleweights Franchon Crews (5-1) and Mexico’s Alejandra Jimenez (12-0-1) meet in a 10 round fight for the WBC world title at Carson, California.

On Saturday Sept. 14, super welterweights Tori Nelson (19-2-3) and Latasha Burton (4-12) meet in an eight round fight at Sterling, Virginia.