State of Women’s Boxing Looks Good with Title Clashes in NYC and LA
Written by: David A. Avila 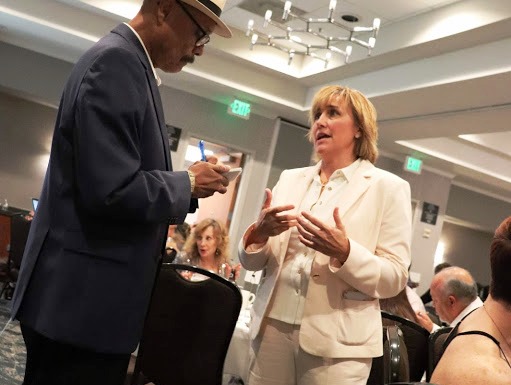 When Pat Emerick, a stylishly dressed 88-year-old, walked into a ballroom in South San Francisco, all of those in attendance got to their feet and lustily applauded female boxing’s oldest living world champion boxer.

It’s been a long time coming, but women’s prizefighting may be turning the corner to prosperity.

A week ago, the International Women’s Boxing Hall of Fame held its induction ceremony and Emerick was unanimously inducted to its illustrious club. Like all women who don boxing gloves, she oozed that fighting spirit in every word she spoke.

“I’ve waited a long time for this and I thank God,” said Emerick to those in attendance at the Hall of Fame ceremony.

Emerick, who lived in South Bend, Indiana, won her world championship back in 1949 in Council Bluffs, Iowa by knockout. Though she was paid $400 for her effort ($400 was comparable to $5,000 today) she felt her part of boxing history was lost forever. But the women’s world of prizefighting persisted despite countless obstacles including sexism.

Female prizefighters have been around for hundreds of years. But the sport was unable to take root and though many women sought to get licensed as pro boxers it wasn’t until the late 1970s that New York State Athletic Commission finally broke down and licensed Jackie Tonowanda, Cathy Davis and Marian Trimiar. It took another 20 years for amateur boxing to form a program.

Others quickly followed and by the late 1980s women’s boxing was growing throughout the North American continent.

Not until Christy Martin showed up did female prizefighting finally become noticed by the American public. Her appearance in a televised fight card woke up Americans to the fact that women’s boxing had arrived and it was fierce.

Don King Promotions had signed Martin and when a male bout fell out on a 1996 pay-per-view card he inserted Martin’s fight and eyes opened up at the female battle. The West Virginia prizefighter was always entertaining and strong but not until her fight was televised did America wake up to female prizefighting and the “Coal Miner’s Daughter.”

“I was amazed at the amount of people who actually saw the fight,” said Martin who battled Dierdre Gogarty in a six round lightweight clash at the MGM Grand in Las Vegas on March 16, 1996. “It was on a Mike Tyson card and I never realized how many people were watching. Everywhere I went people recognized me on the streets of New York, even on Rodeo Drive (in Beverly Hills) people would walk up to me and say they saw my fight.”

Also watching were many young girls and women like Laila Ali, Wendy Rodriguez and Elena Reid who saw Martin knock down Gogarty in that fight and capture the attention of not just the boxing world, but the sports world. Martin was featured on the cover of Sports Illustrated and American women’s prizefighting was basically launched.

In Europe the success of Martin in the boxing world opened up the possibilities of a similar discovery. One country that was always a boxing haven was Germany and in that country two tiny blonde boxers emerged to set the standard for female prizefighting in that continent.

Regina Halmich, a petite flyweight from Karlsruhe, began fighting in 1994 and winning the attention of German fight fans. Almost at the same time Daisy Lang arrived from Bulgaria and also found similar success as a super flyweight. Both women had looks and fighting ability and quickly caught the attention of the German boxing public.

Lang, who was born in Sofia, Bulgaria, was an athlete who learned to box after being urged by her kickboxing trainer that boxing would offer her more opportunities; that it was a mental sport that would fit her personality.

“I love the crowd. The more people the better I feel. To me boxing is like a theater they like you or they don’t like you. The more people I have the more I get to show my public. I was very happy that I did a fight in front of 25,000 people,” said Lang.

But there was a downside.

Both Lang and Halmich could not walk the streets without dozens of people stopping them. There were even those who stalked and hounded the two blonde Venuses.

When Lang retired in 2004 she later moved to America and now lives in Southern California. When Halmich quit in 2007 it left a void in female boxing. Though other women had followed in Germany, none could be found to match their success both in the prize ring and attracting fans.

From about 2009 to 2016 female boxing barely kept from drowning in North America. No women’s boxing was televised and few promoters were willing to put a bout on a boxing card. Though the United States of America was basically ignoring female prizefighting down in Mexico it was a different story.

Mexico had banned female boxing in the 1990s and several of its young fighters were forced to fight in underground fights including a model named Mariana Juarez who crossed the border and began fighting in small towns in California and Arizona. Others followed and finally a smart Mexican promoter realized that female boxing sells.

Juarez returned to her boxing crazy country and began selling out venues and appearing on magazines, television shows and winning fights. She was soon followed by others like old foe Ana Marie Torres, Jackie Nava and Arely Mucino. Women’s boxing exploded and now they are main events, not semi-main events, on major televised boxing cards in Mexico.

American fighters like Kaliesha West, Ava Knight and Maureen Shea had found it difficult to find support in the US so they ventured into Mexico and signed with promoters in that country for a few years. But fans over there preferred to see their own homegrown fighters. So once again American female boxers were forced to scrape for pennies. West, a talented bantamweight from Southern California actually defended her WBO title for free in effort to maintain a hold on it.

In America it was a dismal time for female prizefighting, but in Mexico it was the birth of female boxing and it continues to grow in every major city in Mexico from Cancun to Tijuana.

When the International Olympic Committee finally accepted women’s boxing as one of the sports in 2012, it opened a few doors that had been shut for years. Claressa Shields captured gold in the London Olympics and Marlen Esparza grabbed bronze. Their amateur success did catch the attention of promoters but did not convince them that the American public was interested.

In 2016, while Shields was hunting another gold medal in Rio De Janeiro, Brazil, a female prize fight was finally staged for a televised boxing card. Two undefeated featherweights Heather “The Heat” Hardy and Shelly “Shelito’s Way” Vincent were going to be televised. Both had fought their way up the ranks “old school” style and met on Coney Island on a Fox televised boxing card. It was the first time in many years a female fight was televised and broke a nine-year drought. Both provided a fiery performance and emphatically showed their ability to capture the American public.

Hardy won the fight against Vincent that evening on August 21, 2016 on that same day Shields was capturing her second Olympic gold medal. Though it seems to have gone unnoticed this date could be the most important day in women’s professional boxing.

Shields entry into professional boxing opened up television avenues for a few other women. It has been a slow process but her ability to ravage two weight divisions helped stir interest in the heavier weights. Meanwhile Hardy and others like Amanda Serrano, Seniesa Estrada, Layla McCarter and Mikaela Mayer have kept the American public curious about female prizefighting.

On Friday, Hardy clashes with Serrano in a battle between the two Brooklyn fighters at Madison Square Garden. On Saturday, in Los Angeles, Franchon Crews defends the super middleweight world title against Mexico’s Alejandra Jimenez.

In a span of a mere three years female prizefighting seems to be grabbing a foothold. This weekend will be another step toward the bright rays of success.

“This is the second coming of women’s boxing,” said Crews.