Ewa Brodnicka Gets Unpopular Win Over Edith Matthysse
Written by: David A. Avila 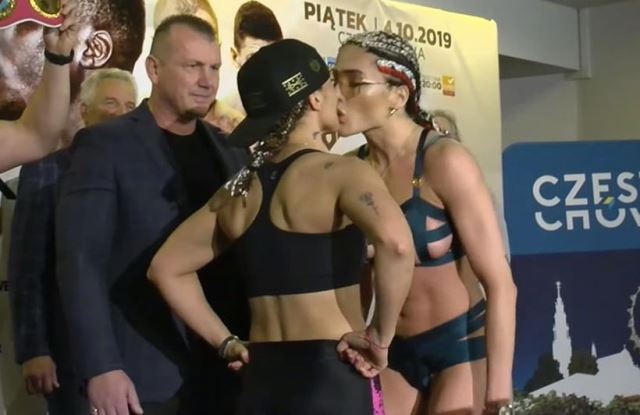 WBO super featherweight champion Ewa Brodnicka, 129, wore quite a revealing outfit to the weigh in for her well-publicized defense against Argentina’s Edith Soledad Matthysse, 127 3/4.

Brodnicka showed plenty of skin for the publicity cameras, but it was really during the fight itself when the provocative titlist seemed to be exposed the most.

Brodnicka (18-0, 2 KOs), managed to hang on to her belt via a split decision that was criticized by many Polish fans observing the contest at the Hall of Sports in Czestochowa, Poland. Matthysse (16-11-1, 1KO), was visibly outraged by the verdict.

A highly critical wave of resulting social media backlash indicated that a majority of people agreed with the challenger’s disgust.

One judge saw it 96-95 for the visitor but the others tabbed it 96-94 and 97-93 for the still undefeated local attraction. When Brodnicka attempted to raise the challenger’s taped hand in consolation, Matthysse pulled away and flipped her the middle finger for TV.

Before the fight, Brodnicka told ringpolska.pl media she was changing her defensive dancing style to be more aggressive. “Edith shows many faces in the ring so I used eight different sparring partners, with tough cookies like Hannah Rankin and Silvia Bortot. I’ve been doing a lot of practice at stopping to engage. The fans will be surprised how much I trade punches.”

That call looked accurate enough during the opening frame. Brodnicka stayed on her toes, but also planted herself for combinations and landed a decent overhand right as the always attacking Matthysse charged in.

It only took around two minutes for Brodnicka to revert back to an evasive strategy. That style works well with her physical dimensions and conditioning but it didn’t make for much in terms of boxing excitement.

For the first half of the fight Brodnicka traded to the body when Matthysse got inside but the more the challenger opened up, the more the champion stayed on her toes. A pattern developed of Matthysse chasing Brodnicka around the ring until Brodnicka pushed her into a clinch along the ropes.

The bout was indeed close and difficult to score, but not because of any real action as much as the fact that rare exchanges were sloppy and neither woman landed many punches. You could almost keep round by round punch stats on one hand.

That was mainly because of the taller Brodnicka, who either stayed outside anybody’s punching range or wrapped her arms over Matthysse’s shoulders to smother her. Referee Leszek Jankowiak let Brodnicka get away with excessive holding in the second half.

Matthysse landed a pair of solid rights in the fifth frame and started a minor surge. For a little while it appeared things might get interesting. There were many sequences when the only shots landed were stay busy swipes to the body by Matthysse. It wasn’t much, but it should have counted for something.

It looked like Brodnicka was running out of gas, while the constantly advancing Matthysse blocked most punches and raised her arms confidently after the eighth and ninth sessions.

Official scorecards were unavailable, but it seems impossible that anyone could have given the last round to Brodnicka. Matthysse was carried around the ring while Brodnicka looked dejected, her arms draped over the strands.

At the final bell, Matthysse mocked Brodnicka by putting a glove to her own, pursed lips. It was a meaningful gesture that signaled revenge, as the former two-title holder assumed she’d added to her collection.

Prior to the fight, Brodnicka had enraged Matthysse during a final face-off photo session by taking a page from the Mikaela Lauren playbook and planting her lips directly on Matthysse’s mouth. An angered Matthysse responded with an open hand to the face, and the women exchanged more slaps.

Between Brodnicka’s scanty attire and the surprise smootch, there was plenty of viral attention. Many mainstream outlets covered the sensationalized prefight ruckus without any mention of bigger boxing shows like the Gennady Golovkin or Claressa Shields events.

It may be that Brodnicka’s fashion statements and unorthodox behavior are just the thing to provide a crucial overall edge on her competition, but judging from what happened inside the ring Friday night, she’s ready to kiss her title goodbye.