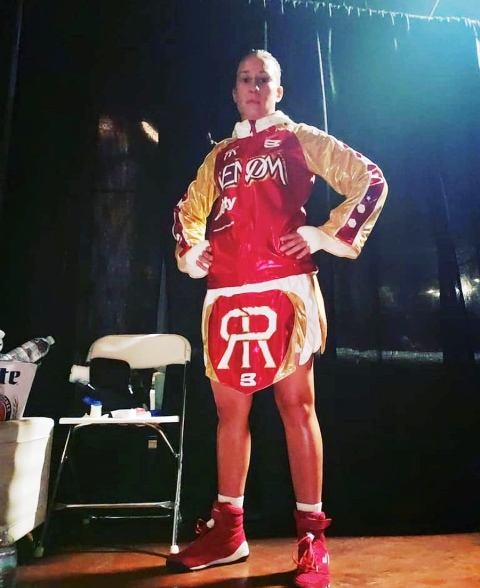 Some women dream of movie stardom, others search for wealth, Rosalinda Rodriguez since a teen-ager sought to put on the boxing gloves and enter the prize ring.

It was a goal 15 years in the making.

“It’s very important for him to promote women’s boxing. I love it. He is doing it more and more,” said Rodriguez of the Roy Jones Jr. Promotions company. “He gives us exposure out there.”

Exposure has been long sought by Rodriguez who started late in the fight game. Though boxing was long a sport she liked, it took many years before she could dwell into the fistic arts.

“At 15 is when I wanted to box. I didn’t know there was actually a sport but I saw a female fight on TV and I was so interested. I was amazed to see two females fight. That’s what motivated me,” said Rodriguez, 33. “I think it was Laila Ali and Christy Martin I saw fight. I didn’t know anything about boxing I didn’t know nothing. It was pretty much interesting when I discovered it.”

Though she wanted to jump into boxing, life sort of took her another direction.

“I wasn’t settled, moving around a lot with my mom. I had a son. From there I had on and off jobs and taking care of my son until I got stable,” said Rodriguez adding that she worked at a laundry mat and cleaned gyms. “I’ve always wanted to try boxing, but l I couldn’t afford it. So when I got enough money I just walked in there and that’s how it started.”

For years Rodriguez would take her son along to the gym and soak in boxing wisdom and skills. Her son Nate, now 12, has different interests.

“It’s not his thing. His thing is about science. He is a very smart kid and I prefer him with his head in the books,” said Rodriguez.

For 10 years Rodriguez has been married to Ada Velez, the former world champion who also works as her trainer. Together they have built a successful road that they hope leads to a world championship.

But the female fight world poses more hardships and potholes than its male counterpart. Finding opponents willing to face an undefeated fighter can be daunting.

“It’s tough to find women who are ready to fight,” said Mercedes Vazquez Simmons who promotes Rodriguez. “But it’s not impossible.”

Mexico’s Aguayo recently suffered her first loss against California’s Adelaida Ruiz in a battle of undefeated super flyweights. In that fight she snapped a four-fight knockout streak held by Ruiz, but lost by unanimous decision.

Rodriguez will be looking to pry the precise angles and counter measures needed to defeat the Mexican fighter from Tijuana. It’s what she loves about boxing.

“I like the technical work of boxing. Why you have to be so technical about it. The defense, the offense and timing them, you pretty much have to be on point with the opponent and it’s not an easy sport,” said Rodriguez.  “I also like that it has a lot of strategies.”

One of her favorite moments came three years ago when she fought Noemi Bosques for the NABF title.

“I think the fight for the title NABF was the more technical of all my fights and my favorite,” said Rodriguez who won by unanimous decision after eight rounds.

The Florida-based fighter gets another opportunity to do what she likes – hit them with science.

“I’m very proud, I have a smile ear to ear,” said Rodriguez about having her fight shown on UFC Fight Pass. “Hey, they allow me to perform on their card.”

Rodriguez and Aguayo are living their dream.