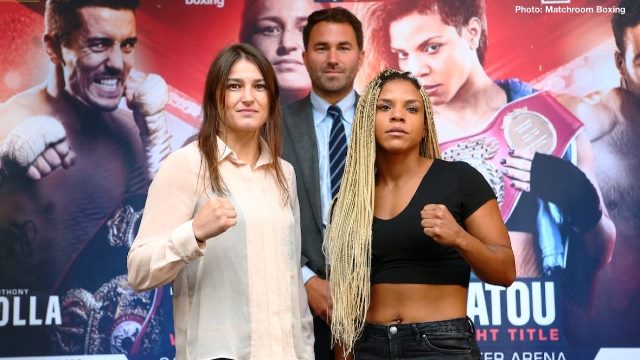 Smaller weights finally get their day this weekend with not just one, but two world title fights taking place in the United Kingdom and the United States of America on Saturday.

Expect the hard charging Linardatou to give Ireland’s Taylor another pressure style fight, much like when Belgium’s Delfine Persoon fought her earlier this year. It’s not an easy challenge and props to Taylor for taking another difficult match.

Taylor could easily be fighting easy touches and grab a wheelbarrow amount of money as the unified lightweight world champion. Instead, the former Olympic gold medalist jumps back in against Greece’s best female fighter and a good one.

Female prizefighting gains a tremendous amount of prestige with Taylor showing the way with another solid clash this weekend.

Later, on the same Saturday evening, in Las Vegas, two undefeated flyweights finally meet and this one has the entire West Coast of the U.S. holding their breath.

For years Seniesa Estrada (17-0, 7 KOs) and Marlen Esparza (7-0, 1 KO) have snapped at each other via social media and whenever they happen to run into each other. They meet in a 10 three-minute round match for the vacant WBA interim flyweight world title on Saturday Nov. 2, at MGM Grand in Las Vegas, Nevada. DAZN will show the fight live.

East L.A.’s Estrada has reeled off five consecutive knockout wins in anticipation of meeting Esparza. Though both fought in the amateurs they never met in the boxing ring.

Esparza, a former 2012 Olympic bronze medalist from Houston, Texas, has been eager to prove that Estrada has not been tested and is not in her league as a boxer.

Ten years ago it would have been impossible to imagine that female prize fights in the U.S. would stack up for three successive nights with competitive matches. But this past week it happened again.

In Brooklyn, a DiBella Entertainment fight card featured undefeated Tiara Brown defending the NABF featherweight title against Vanessa Bradford on Thursday Oct. 24. After eight highly contested rounds Brown won by majority decision. It was more proof that women’s prizefighting has entered a new realm with Bradford showing solid skills against Brown who was tested. The Washington DC police officer by day and prizefighter by night kept the heat on for all eight rounds in defending the title. Both fighters looked very good.

Another who looked good was Brooklyn’s Melissa St. Vil who defeated former world champion Dahiana Santana by unanimous decision after six rounds in a lightweight contest.

St. Vil wants another crack at a world title and moved up in weight for this fight.

Across the North American continent, in Reno, Nevada to be exact, former 2016 Olympian Mikaela Mayer defended the NABF super featherweight title. She flattened Alejandra Zamora in the first round and then battered her around the ring until the Argentine corner smartly saved their fighter at the end of the sixth.

Mayer wants the WBC world title now held by Eva Wahlstrom of Finland. But if that doesn’t come to fruition maybe a clash with the other Americans like St. Vil or Amanda Serrano could be attainable. But, Mayer wants a world title now at super featherweight before she moves up a division and corrals a fight with Katie Taylor.

Another fighter busy last week in Reno was Florida’s Rosalinda Rodriguez who remained undefeated after winning by unanimous decision against Mexico’s Myrka Aguayo on Friday Oct. 25.

Rodriguez, 33, fights at super flyweight and bantamweight and is looking for a title shot against anybody.

“I would love a fight with Mariana “Barby” Juarez,” said Rodriguez. “That’s my dream fight.”

Debora Anahi Lopez (15-0-1) was the winner by unanimous decision after six rounds versus Natalia Alderete (3-3) on Friday Oct.25. The super flyweight fight was held in Buenos Aires.

On Saturday Nov. 2, lightweights Sofia Rodriguez (1-2) and Nicole Morales (0-0) meet in a four round bout at Laprida, Buenos Aires.

On Friday Nov. 1, bantamweights Jill Serron (6-1) and Marina Dekic (2-7) meet in a 10 round clash for the Belgian title at Limburg.

On Friday Nov. 1, bantamweights Amy Naert (0-0) and Calliope Slagmulder (0-0) meet in a four round contest at Izegem.

Tania Walters (1-0) won her pro debut by decision after four rounds versus Perla Rojas (1-7) on Friday Oct. 25. The super bantamweight match was held in Toronto.

On Friday Nov. 1, featherweights Kylie Fallis (3-0) and Ana Ruth Castro (1-1) meet in a four round fight at Ontario.

Jianping Ouyang (4-1-1) knocked out Charimae Salvador (4-4) in the fifth round on Saturday Oct. 26. The minimum weight fight took place at Chongqing.

Elodie Bouchlaka (5-1-2) won by split decision over Mailys Gangloff (2-1) after eight rounds on Saturday Oct. 26. The bantamweight fight was held in Savoie.

On Saturday Nov. 2, bantamweights Marie Priaulo (1-1) and Marijana Dasovic (0-2) meet in a four round bout at Isere.

Silvia Bortot (7-0-1) was the winner by unanimous decision after 10 rounds against Djemilla Gontaruk (15-6-2) on Friday Oct. 25. The European super lightweight title fight was held at Venice.

On Friday Nov.1, lightweights Caroline Andre (2-3) and Bianka Majlath (3-2) meet in a 10 round match at Differdange.

On Wednesday Oct. 30, super welterweights Inna Sagaydakovskaya (7-1) and Mariam Tatunashvili (1-11-2) meet in a six round contest at Moscow.

Shannon Courtenay (4-0) defeated Serbia’s Jasmina Nad (11-23-5) by decision after four rounds on Saturday Oct. 26. The super bantamweight contest was held in London on the under card of the Regis Prograis versus Josh Taylor clash.

Mikaela Mayer (12-0) won by technical knockout at the end of the sixth round against Argentina’s Alejandra Zamora on Saturday Oct. 26. The NABF super featherweight title fight was held in Reno. Mayer, 29, was making her third defense of the title.

Avril Mathie (4-0-1) was the winner by unanimous decision after four rounds versus Karen Dulin (3-22-1) on Friday Oct. 25. The bantamweight match was held in Philadelphia, Penn.

On Friday Nov. 1, bantamweights Michelle Morales (1-0) and Myasia Oglesby (0-4) meet in a four round bout at Hammond, Indiana.

On Saturday Nov. 2, welterweights Chevelle Hallback (31-8-2) and Szilvia Szabados (18-16) meet in a six round contest at Tampa, Florida.