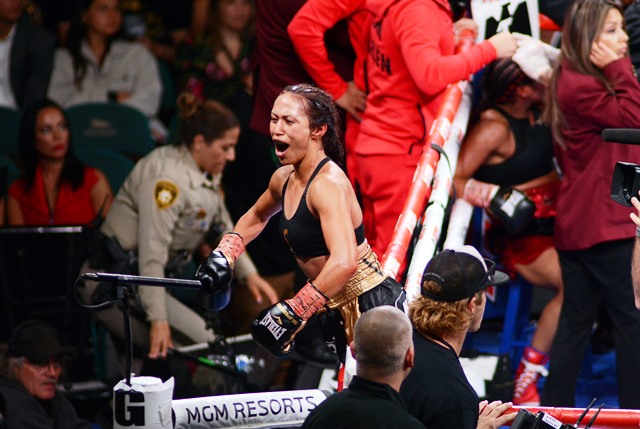 LAS VEGAS, Nevada-Seniesa “Super Bad” Estrada walked away with the interim WBA flyweight title by technical decision over Marlen Esparza after a bloody forehead gash forced a stoppage after a clash of heads on Saturday.

“I couldn’t see anything,” said Esparza.

For nine three-minute rounds East L.A.’s Estrada (18-0, 7 KOs) switched to southpaw and orthodox against the more standard boxing style of Houston’s Esparza (7-1) and emerged the victor after some back and forth exchanges at the MGM Grand.

Despite the extra minute of time in each round, both female fighters worked a fast pace from the opening bell. Usually women fight two-minute rounds but Esparza’s team asked for three-minute rounds and Estrada’s team agreed.

Estrada was able to use her unorthodox style to dive in as a southpaw with round house lefts and then slide into orthodox and deliver rights. For a short while it worked well as she connected with solid blows.

But the Texas fighter Esparza has tremendous grit and though hit by shots that normally had resulted in knockout wins for Estrada, not this time. Esparza soon discovered firing lanes for her straight rights. She also mixed in some combinations but it was never enough to keep Estrada from attacking.

During mid rounds a clash of heads opened up a two-inch gash on the Texas fighter’s forehead and it definitely affected her aggressiveness. Estrada took over from that point.

Body shots by Estrada seemed to sap the energy and offense from Esparza who lowered her hands in defense. Over and over again Estrada drilled left hooks and rights to the Houston fighter’s body and it looked bad for Esparza.

But if you expected Esparza to quit and run she dug deep and made a big stand in the seventh round with some precision one-two combinations and several more straight rights. It stopped the East L.A. fighter from overrunning her and possibly gave the Texan the round.

Back to the inside went Estrada digging more body shots and adding an uppercut that connected. The East L.A. fighter seemed determined to win by knockout and she put more juice into her blows in the eighth round. Combination after combination landed for Estrada but Esparza did not quit.

The ninth round saw Estrada dive into another inside attack and was met with Esparza who lowered her head into the East L.A. fighter. Heads collided but the two continued to fire punches. Estrada fired a triple left hook and followed it up with a right cross and was met by an Esparza right cross. The East L.A. fighter opened up with a three-punch combination to end the round.

Referee Robert Byrd walked over to the corner of the bloodied Esparza and asked if she could see? She shook her head no and the referee waved the fight over.

“I whooped her (butt) every round,” said Estrada. “I didn’t really target it (the cut) too much.”

Because the cut was caused by an accidental clash of heads, the fight went to the scorecards. All three judges favored the Southern California fighter 90-81, 89-82, and 88-83. Estrada becomes the interim WBA flyweight titleholder. The actual WBA champion is Japan’s Naoko Fujioka.