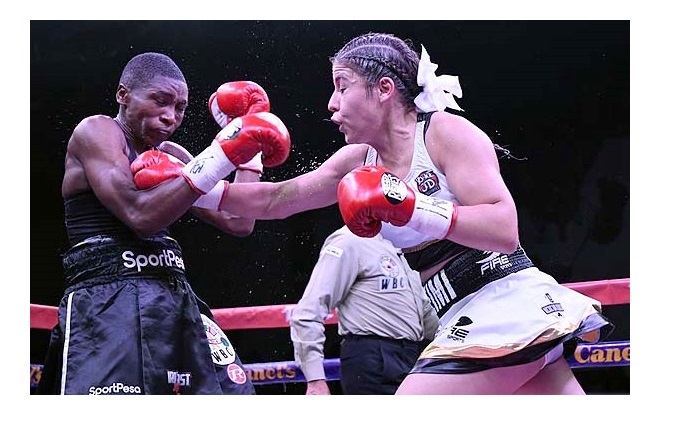 After beating Catherine Phiri for the second time in her career earlier this year in the third defense of the WBC super bantamweight title, Kenya’s Fatuma Zarika (32-13-2, 17KO) stated she would be holding off her retirement for at least three fights.

Saturday in Ciudad Cuauhtémoc, Mexico, and live on the Azteca channel 21-year-old Yamileth “Yeimi” Mercado (15-2, 4KO) completely dominated Zarika, 34, scoring a unanimous decision over 10 scheduled rounds in the main event of the Zanfer Promotions card.  The final tally was 99-91 and 98-92 twice, all for Mercado.

Back in September of last year Mercado of Ciudad Cuauhtémoc traveled across the Atlantic Ocean to challenge Zarika in her backyard of Nairobi, Kenya.  The fight ended in a hotly contested and controversial split decision for Zarika.

This time the African returned the favor and decided to attempt her fourth title defense in Mexico.

She should have stayed home.

With her hometown’s Polyforum bursting at the seams full of her supporters, Mercado began controlling the distance and in a sense the fight from the opening bell. Mercado’s recipe for success was a steady jab as she boxed from the back foot while circling towards her left.

Zarika inched forward while she tried to find the distance for her attack.  Her attack turned out to be sporadic jabs that missed more than they landed and even a more sporadic right hand that landed even less.  One did land in the second round, flush to Mercado’s chin that caused the Mexican to lose her balance giving Zarika the round.

In the third Mercado added to her arsenal long wide hooks from the outside to the body of Zarika that made the African even more hesitant to throw anything but a jab.  Soon Mercado added a more aggressive left hook to the jab and right hand combinations.

At the halfway mark of the fight Mercado increased the action a bit but only enough to win the rounds.  Mercado began to unleash a more consistent right hand while continuing with the left hook to the body.  Zarika had no luck in closing the ring, as Mercado would quickly circle to her left out of harm’s way as soon as she threw her three-punch combos.

Zarika’s form was technical but her style was too passive as she only threw a jab as her most frequent weapon of choice.  She couldn’t have made it any easier for the much less experienced Mercado to dethrone her.  Mercado wasn’t doing much more but it was enough to score round after round as in the second half the rounds became carbon copies of the previous one.

As the chants of “Mexico, Mexico” began to die down after the once excited crowd began to realize each round was exactly the same as the previous one, Mercado began to take risks in the last ten seconds of the round to unleash a flurry of power punches.

In round eight, Mercado opted to throw the left hook to the head and not the body and hurt Zarika.  Mercado decided not to capitalize on it and instead went back to jabbing and circling to her left.

With the fight and in turn the title escaping from her hands, Zarika came out a bit more aggressive in the ninth round looking to trap Mercado in a neutral corner.  Zarika threw one of her few combinations but missed.  That failure was enough to make her go back her modus operandi of the fight, to inch forward and occasionally throwing a jab that nearly never landed.

With only two minutes between her and the world title, Mercado didn’t risk the win in the 10th and final round as she did exactly what she did in the first, control the distance with a steady jab that kept by this time the apathetic Zarika at bay until the final bell.

With the win Mercado captures her first world title in her second attempt.