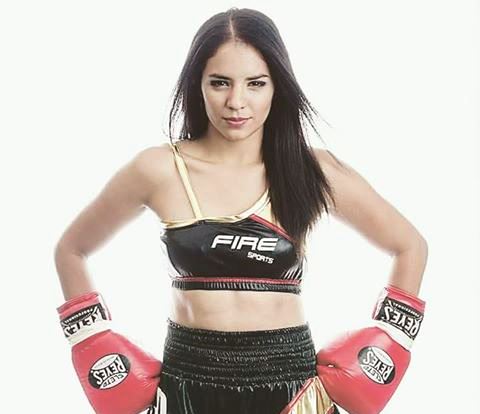 The ultra-popular Diana “Bonita” Fernandez (22-3, 4KO) of Ciudad Juarez, Mexico, was able to use her advantage in height and reach to score one of the most important wins of her career this past Saturday night, defeating former world champion Esmeralda “La Joya” Moreno (32-12-2, 11KO) via unanimous decision.

Official scores after 10 rounds were 99-91 twice and 97-93, all for Fernandez who defended her regional WBC Latino super flyweight title.

The 32-year-old Moreno traveled eight pounds north and about 1100 miles from her home in Mexico City to face off against Fernandez in one of the featured televised fights on the traditional “Sabados de Box” on Mexican mega-channel Televisa.

The challenge against Juarez was her second for a world crown.  Back in August of ’17 Fernandez traveled south to Argentina to challenge for the IBF 115-pound strap coming up short against Debora Anahi Dionicius.

On the strength of that performance Fernandez got signed to Promociones del Pueblo, and since then has become a media darling being featured on Televisa while being developed into a local attraction in her hometown of Ciudad Juarez.

Although Fernandez in 25 fights is an experienced fighter it pales in comparison with what her opponent, Esmeralda Moreno, has done inside a ring.

In her last fight Moreno challenged once again for the WBC light flyweight title against current champion Yesenia Gomez last September.  Moreno lost a majority decision.  Moreno’s last five fights prior to the fight have been at the world title level going 2-2-1.  The wins were over the aforementioned McMorrow and Zamora. The win over Zamora was for the green and gold 108-pound.

Since that last win Moreno has been on a downward slide, dropping a unanimous decision to “Kika” Chavez for the WBC flyweight title in September of 2017.  A draw against Yesenia Gomez was next where Moreno defended her WBC light flyweight title, but in the rematch Gomez bested her with a majority decision.

The fight against Fernandez was her first in over a year.

Prior to the fight at the final press conference Fernandez stated, “I have lost in my hometown so I am not protected.  I want this win to be very clear.  I know how to fight in any style.  I am not fighting just anybody, she is multi-time world champion and I asked for this challenge.  I want to be ready for another world title opportunity.”

The win was clear for Fernandez.

Her advantage was evident from the opening bell as well as Moreno’s softness around her mid-section.

Using her longer reach Fernandez looked to keep Moreno at bay with a long jab but fairly quickly using her experience the Mexico City fighter was able to cut off the distance and be the aggressor for the majority of the fight.

Fernandez was intelligent using her footwork to box off her back foot while proving her hand speed was superior.

It didn’t help Moreno that in the fourth an accidental clash of heads opened up a light cut over her right eye.

Throughout the fight the exchanges were fast and furious with Moreno looking control the short distance while Fernandez fighting to keep some distance between them.

With the fight obviously going Fernandez’s way, Moreno decided to go for broke in the last couple of rounds and really push the issue.  She was able to score her best punches, as Fernandez was more stationary.  Moreno scored with all her arsenal, hooks to the body, uppercuts and short right hands to the head but it wasn’t enough as Fernandez had banked enough rounds in the first half of the fight.