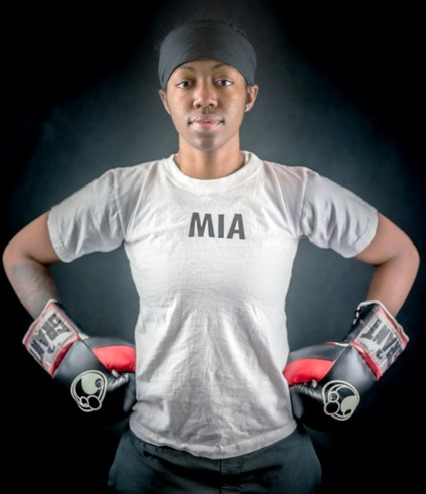 If there is one thing 19-year-old Mia “Killer Bee” Ellis doesn’t lack is confidence.  About a month away from her pro debut, the amateur standout fighting out of the tough town of Baltimore, Maryland, believes she has what it takes to be the future of women’s boxing.

“I work hard every day, I am disciplined,” Ellis stated when asked why she is the future of women’s boxing in an exclusive interview with the 2-Min Round, the all-female boxing podcast.  “A lot of women think it is different because they are female but it is not.  You have to work as hard as men.  You got to be dedicated to the sport and this is your job.  Work hard every day and do your best every day.  With me that is what I do every day and I feel that is what is going to make me the future of women’s boxing.”

Ellis might not have to look too far to get the blueprint. All she has to do is listen to her father and trainer Kenny Ellis and gym mate multi-time world champion Gervonta Davis.

“I’ve been around him since three-years-old,” said Mia, who alongside Davis trains out of Upton Boxing Gym in her hometown of Baltimore.  “I’ve seen everything he has been through; I can understand it.  Most of his strength is because of what he has went through.  Me watching him I feel like it will make me better also. Not by what he does inside the ring but also how he carries himself outside the ring.”

Ellis began training at three and by five she was featured in the sports page of her hometown newspaper.  Trainer dad Kenny raised two older daughters and despite one taking on boxing before Mia, it was his youngest who really stuck it out.

“She just isn’t that type, she is more of a model type,” Mia said with a quick giggle about her older sister’s stint as a boxer.  “It just wasn’t for her.”

Despite Baltimore being one of the toughest cities in America, with its murder rate always near the top of the list, like Davis and many others, they have found the Upton Boxing Gym to be a safe haven. And maybe the thriving boxing city known as “Charm City” is not as bad as advertised.

“It is not as bad as people want to make it,” Ellis said.  “We have our crazy days.  It is cool, you see different stuff.  It just makes you go harder just to see better places but I like it. It is cool.”

With her dad being a boxing trainer for as long as she can remember, there wasn’t really anything else “Killer Bee” thought she would be but a boxer.

“I’ve been training since I was three years old and I am now 19-years-old,” she explained.  “The reason I started is because my dad is a coach.  Me being with him most of the time, I was in the gym with him, he would come home and watch the old tapes and I would watch them with him.  It stuck to me and I learned the basics from just watching.  I stuck to it and I loved it.”

“This might sound crazy but my dad one day took me to a boxing match,” she answered when asked what made her choose boxing as her sport.  “I saw a guy get his nose busted.  I said, ‘I want to make somebody’s nose bleed too’.  Ever since then he started training me and in my first fight, I busted a nose and that made me really fall in love with the sport.”

Even though Mia had been in the gym her whole life, she didn’t begin competing until the tender age of eight.  She mentions it was always her idea.

“My parents are the type they want their kids to learn on their own to find out if they like things or not,” she said.  “My dad always told me, ‘if you don’t want to do it, you don’t have to do it.’  I liked it and I stuck to it.  My mom second-guessed herself but then she saw how much I loved the sport so she didn’t bother with it. She just let me go ahead and do it.”

Growing up, boxing always came first for Mia but because she wanted it.  The saddest days for her as a little girl were the days the gym was closed, so much more she would cry.  Despite only competing as an amateur for the better part of 11 years, Ellis only ended up with 24 fights.

The move was a strategic one made by her father and trainer.

“Since I’ve been training for so long, I already had the experience I needed and the skill,” Mia explained.  “There is still a lot for me to learn but I know what I need to know so with that being said, my dad didn’t really want me to have so many fights.  Like Gervonta Davis had over 200 fights, he didn’t want me to do all that fighting in the amateurs because I had the knowledge that I need.”

As an amateur Ellis amassed a record of 20 wins against only four losses.  Her last loss was at the age of 13 while capturing several Golden Gloves titles among other accolades.

Recently her and her father met at a crossroads. While the elder Ellis wanted his younger daughter to make a run at the Olympics, feeling she had what it takes to win a gold medal.   Despite being confident of reaching the pinnacle of amateur boxing, Mia only dreamed of the bright lights of professional boxing.  Her father came up with a pragmatic solution for their differing of opinions.

They called it the 50-State challenge.

“It was for me to fight one girl from each state.  For me to turn pro, I would have to beat 50% of those girls,” Mia said.  “The reason I wasn’t able to complete that challenge was because we would call girls to fight, they would agree to fight, and then when the day would come, they wouldn’t show up.  It was kind of hard for me to find fights, we were aiming for me to fight every month but it wasn’t working out because of that situation.  People weren’t willing to compete with me. I guess they knew who I am and what gym I am from so we decided to just turn pro.”

Standing at 5’9” and planning in campaigning at the lightweight limit of 135 pounds, Ellis has the height, strength and skill to develop into a master boxer but she says she would rather mix it up, but can do both to get the win.

With only a month to go before she laces up the gloves for the first time as a professional, Ellis can only look towards the future now. She gets to make her pro debut alongside her gym mate Gervonta Davis, who is moving up a weight division to 135 pounds on the same night.  Fighting on such a large platform doesn’t escape her.

“I believe this is only the beginning because I am the future of women’s boxing,” she said confidently. “It is very rare for women to make their pro debut on this big platform.  I am lucky and I want to thank Gervonta for that.  I am lucky to have this opportunity because a lot of women would never have this opportunity to have their pro debut on such a big card like this.  It is always on small cards on small venues.”

Ellis doesn’t forget the fact many women have come before her but despite that, she foresees big things for herself in the future.

“First, I would say Claressa Shields, she won the Olympics two times and she is the undisputed champion right now in her professional career so she is definitely doing the right things for women’s boxing.  I like Ann Wolfe back in her time and now I like Katie Taylor.  In five years, I see myself a champion in many divisions.  In 24 months actually I would like to face Katie Taylor. After I would be the champion.”

To listen to the unedited exclusive interview, please visit BlogTalkRadio.com/2MinRound