Three-Minute Round Female Fights, Katie Taylor and More
Written by: David A. Avila 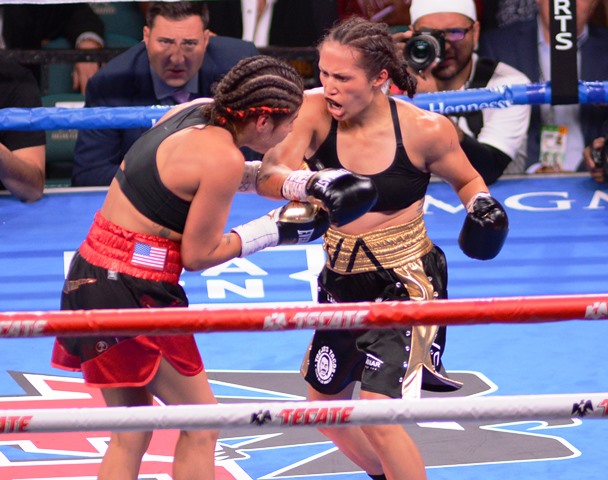 In a three-minute round battle between Seniesa “Super Bad” Estrada and Marlen Esparza, the Olympic bronze medalist, the sports world got a glimpse of just how good female prizefighters can be with the extra minute.

Yes, it was bloody due to an accidental clash of heads, but for nine furious rounds Estrada and Esparza unleashed their arsenal of offensive and defensive tactics. Many reporters in Las Vegas were unaware of the change to three minute rounds. All were impressed.

A big difference was that midway through the fight the lightning blows coming from both fighters slowed a tick and that forced each to slip into another fight mode. Body attacks led to a clash of heads and that resulted in a massive cut on Esparza.

East L.A.’s Estrada continued to target the body and showed off something rarely seen in the women’s fight game, she showed her motor was prepared for 10 three-minute rounds and won by unanimous decision.

Ironically, Estrada walked into the boxing ring with the WBC Silver light flyweight belt though she was fighting for the interim WBA flyweight title. The WBC forbids 3-minute rounds on its title fights. Maybe they should reconsider their stance.

Mauricio Sulaiman, the head of the WBC and a generous advocate for women’s prizefighting, has cited publicly many times that a report by medical journals shows women are more susceptible to concussions.

Layla McCarter, a multi-division world champion and considered by many one of the top female fighters today pound for pound, applauded the Estrada-Esparza fight especially their decision to go three-minute rounds.

Victor Conte, founder of SNAC a sports nutritionist system that assists pro athletes, said the danger of three minute rounds to women is not as dangerous as the use of performance enhancement drugs by female prizefighters.

“There is a greater need for testing in women’s boxing than men’s boxing. This needs to be addressed,” said Conte adding that those worrying about the danger of three-minute rounds versus two-minute rounds do not fully understand that the need for PED testing far exceeds that. “Female opponents not on PEDs are in a greater disadvantage and could even be killed in a fight.”

Prizefighting is a very dangerous sport and all who lace up the gloves know that they could possibly die after a fight. Whether it is two minutes or three minutes no one can determine what is better. Not even scientists who have never fought in a prize ring. But if men are fighting at three-minutes and women want the same – why not?

Let the women fighters decide. We are in a democratic society.

In England, a WBO super lightweight world title clash saw Katie Taylor jump into the 140-pound weight class and take the title from Christina Linardatou by unanimous decision after 10 rounds on Saturday.

Would fighting at 10 three-minute rounds made a difference in the result?

Earlier this year Ireland’s Taylor unified the lightweight division with a hair-raising performance that saw her edge by Belgium’s Delfine Persoon by majority decision. Against Linardatou she met another aggressive foe and was able to out-maneuver the Greece-based fighter and win by unanimous decision.

Would three-minute rounds have made a difference?

Taylor used her footwork and angles to avoid the hard charging Linardatou during the second half of their fight. Could the pride of Ireland have avoided Linardatou or Persoon for that matter in 10 three-minute rounds?

It’s an interesting factor that fans of the female sport would love to see especially if the ultra-talented Taylor meets WBC, WBA super lightweight titlist Jessica McCaskill in a unification clash. It would also be a rematch between the two who first met two years ago with Taylor winning by decision. That fight made McCaskill’s reputation and now she has two world titles.

Taylor already unified the lightweight division and is looking to do it again in the super lightweights.

Speaking of Delfine Persoon, the former lightweight world champion is dropping down a weight division to meet Helen Joseph on Monday Nov. 11, in Belgium for the interim WBA super featherweight title.

Persoon came very close to upsetting Taylor, but the former Olympic gold medalist from Ireland was able to use her skills to survive the late round onslaught when they fought this past June in New York City.

Joseph is a hard-hitting Nigerian who now lives in the U.S. and has found it difficult to find opponents in her bantamweight class. For this fight she is moving up three weight divisions and Persoon is dropping down one weight division to make this fight.

“This fight means a lot to me,” said Joseph who leaves on Wednesday to Belgium. “It will show how good I am.”

The Nigerian bomber has been willing to fight from flyweight to super featherweight. Now she gets a chance to show what she can against an elite foe.

Kylie Fallis (4-0) was the winner by decision over Ann Ruth Castro (1-2) after four rounds on Friday Nov.1. The featherweight bout took place in Oshawa, Ontario.

On Sunday Nov. 10, light flyweights Jianping Ouyang (4-1-1) and Thaksaporn Intachai (1-0) meet in an eight round clash at Fuzhou.

Marie Priaulo (2-1) was the winner by decision after four rounds versus Marijana Dasovic (0-3) on Saturday Nov. 2. The bantamweight fight was held in Grenoble.

On Saturday Nov. 9, light flyweights Valentina Milazzo (2-0) and Andrea Jenni (1-13) meet in a four round fight at Sicily.

On Sunday Nov. 10, welterweights Saule Tolegen (0-1) and Jasita Yotawan (0-3) meet in a four round bout at Pattaya.

Seniesa Estrada (18-0) won by unanimous technical decision after nine rounds versus Marlen Esparza (7-1) on Saturday Nov. 2. The interim WBA flyweight clash took place in Las Vegas. A gash on Esparza’s forehead caused by an accidental clash of heads forced the fight to end in nine rounds instead of the scheduled 10.

Chevelle Hallback (32-8-2) defeated Szilvia Szabados (18-17) by unanimous decision after six rounds on Saturday Nov. 2. The super welterweight fight took place in Tampa, Florida. It was Hallback’s second victory over Szabados in two months. Before that she had not fought in five years. Also, Alycia Baumgardner (8-1) beat Annette Pabello (3-5) by decision in a six round lightweight fight.

Michelle Morales (2-0) won by technical knockout in the first round over Myasia Oglesby (0-5) on Friday Nov. 1. The super bantamweight fight was held in Hammond, Indiana.

On Thursday Nov. 7, light flyweights Briana Sanchez (2-0) and Amanda Borg (0-0) meet in a four round fight at Tucson, Arizona.

On Saturday Nov. 9, super flyweights Amy Salinas (3-0) and Taversha Norwood (0-0) meet in a four round fight at Albuquerque, New Mexico.

On Saturday Nov.9, super lightweights Selina Barrios (6-1) and Allison Martinez (1-3) meet in a six round fight at San Antonio, Texas.