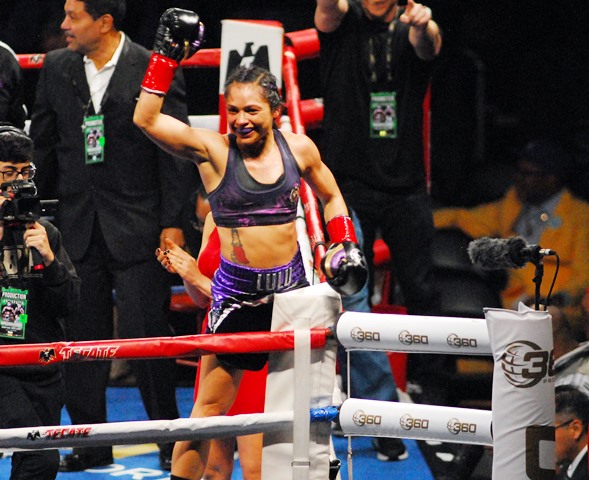 Two title fights in the super lightweight and mini-flyweight divisions take place in New York two days apart this week. Both are expected to be streamed.

Argentina’s Ana Laura Esteche (14-5-3) arrives to face Indiana’s Mary McGee (25-3) in a 10-round clash for the vacant IBF world title at Terminal 5 in New York City. UFC Fight Pass will be streaming the prizefighting event live.

Esteche was the name bandied about several times as a possible foe for Chicago’s Jessica McCaskill who clasps the WBC and WBA super lightweight titles. Instead, a rematch with Erica Farias took place and Chicago’s only world champion walloped the former champion from Argentina like a whipping post.

McGee, 33, formerly fought as a lightweight and even ventured as heavy as a middleweight, but despite a 14-year career she’s had only two cracks at world titles – she lost to Holly Holm in 2013 and later that same year to Farias.

After six years of waiting in the trenches for another opportunity this might be her time.

A couple of days later in Brooklyn, WBC interim minimum weight titlist Louisa “Bang, Bang” Hawton (9-2) and Lorraine Villalobos (4-2) meet in a rematch at Barclays Center on Saturday Dec. 7. Showtime may stream the fight. It has yet to be confirmed.

The last time Hawton and Villalobos met in the boxing ring both erupted in a whirlwind of impressive blows for such tiny women. But after four rounds Villalobos –who was a last minute fill in- gassed out and Hawton took over with some vicious blows that forced the referee to stop the fight in the fifth round of a scheduled 10-round title fight. The loss didn’t sit well with Villalobos.

Since that fight Villalobos has fought twice more and won her last by devastating knockout. She’s feeling her oats. Hawton just wants to fight and doesn’t care who steps in the boxing ring.

“The people thought the first fight was exciting and when the opportunity presented itself to fight her again I said cool, let’s do it,” said Hawton a native of Perth Australia.

The Aussie fighter Hawton just might be female boxing’s most exciting fighter. She loves to bang and would probably fight someone twice her size.

“Light up the Barclays and show them what Bang Bang Lulu’s all about,” said Hawton.

She’s never been in a boring fight yet.

Those fans familiar with the little bangers know they don’t tire and are fearless. Hawton and Villalobos will deliver.

Norway’s Cecilia Braekhus shook off the year’s rust and handled Argentina’s Victoria Bustos decisively all while learning a few new tricks from “Mexican style” trainer Abel Sanchez. The new wrinkles were noticeable as the welterweight champion seldom backed up.

Following the decisive win her new promoter Eddie Hearn told the world that a showdown with lightweight and super lightweight titlist Katie Taylor will be hatched sometime next year.

Hearn added that each will fight at least once more before meeting in the boxing ring.

Braekhus will remain in Big Bear, California where Sanchez has his training camps. No doubt she will be quite comfortable in the snow that blanketed the mountains this past weekend. The welterweight world champion is the first female that I can recall Sanchez focusing on. It will be a new adventure for Sanchez, but his right hand man happens to be Ben Lira, who’s renown as the best trainer for female prizefighters in Southern California.

The tall lean welterweight has always been one of boxing’s best athletes and has faced many of the top welterweights in the world. But a pending clash against Ireland’s legendary Taylor could be a true test for Braekhus.

On Friday Dec. 6, super flyweights Augustina Belen (3-0) and Antonella Molina (1-6-1) meet in a four round bout at Buenos Aires.

On Saturday Dec. 7, flyweights Ayelen Granadino (5-0-2) and Gabriela Alaniz (6-0) meet in an eight round fight at Buenos Aires. Also, bantamweights Florencia Juarez (6-0) and Natalia Alderete (3-3) meet in a four round match.

On Saturday Dec. 7, flyweights Anyelen Espinosa (8-1) and Rosa Laura Salazar (3-6) meet in a four round fight at Rio Negro.

Ebanie Bridges (3-0) won by knockout over Kanittha Ninthim (1-12) in the second round on Saturday Nov. 30. The bantamweight fight took place at South Brisbane.

On Friday Dec. 6, bantamweights Mikenna Tansley (2-0) and Maria Hernandez Garcia (6-4-1) meet in a six round fight at Edmonton.

On Saturday Dec. 7, light flyweights Kim Clavel (10-0) and Esmeralda Sagahon (7-3) meet in a 10 round title clash at Montreal. Also, featherweights Martin Vallieres-Bisson (0-0) and Tereza Dvorakova 0-2) meet in a four round bout.

On Saturday Dec. 7, featherweights Sabrina Flamand (0-0-1) and Sandra Morcet (1-0) meet in a four round match at Val de Marne.

Eda Essaoudi (3-0) beat Zeliha Ercin (0-1) by decision after four rounds on Saturday Nov. 30. The featherweight bout was held in Nordheim-Westfalen.

On Saturday Dec. 7, welterweights Olja Kljajic (2-2) and Zorana Jakovlevic (0-2) meet in an eight round clash at Bayern.

On Saturday Dec. 7, super lightweights Derya Saki (8-0) and Boglarka Bojer (0-1) meet in a six round bout at Bruchsal.

Amahl Wahby (2-0) defeated Ksenija Medic (0-17-2) by decision after six rounds on Wednesday Nov. 27. The lightweight match was held in Florence.

On Saturday Dec. 7, featherweights Kimika Miyoshi (14-12-1) and Aira Midorikawa (5-0) meet for the Japan title at Kawasaki. Also, bantamweights Michiko Abiru (1-3) and Kae Okamura (1-0) meet in a four round match.

Patricia Berghult (14-0) was the winner by unanimous decision after 10 rounds against Scotland’s Hannah Rankin (8-4) on Wednesday Nov. 27. The IBO super welterweight title fight took place at St. Julians. Berghult, 25, fights out of Sweden.

On Saturday Dec. 7, welterweights Alejandra Ayala (12-5) and Maria Guadalupe Duran (2-3) meet in an eight round clash at Tijuana. Also, bantamweights Myrka Aguayo (2-2) and Jennifer Salgado Hernandez (1-4-1) meet in a four round match.

On Saturday Dec. 7, light flyweights Gabriela Sanchez Saavedra (6-3) and Silvia Torres (20-1-2) meet in an eight round clash at Puebla.

Monica Cruz (2-1) won by majority decision after four rounds versus Estefania Alvarado (1-1-1) on Wednesday Nov. 27. The bantamweight clash was held in Panama City.

On Friday Dec. 6, flyweights Efasha Kamarudin (4-0) and Floryvic Montero (5-8) meet in a four round bout at Singapore.

Miriam Gutierrez (13-0) was the winner by unanimous decision after 10 rounds versus Keren Batiz (6-2-1) on Friday Nov. 29. The WBA interim lightweight title fight was held at Madrid.

Melania Sorroche (16-2-2) defeated Violeta Gonzalez (7-2) by knockout in the eighth round on Saturday Nov. 30. The EBU bantamweight title fight was held at Barcelona.

Lorea Murgoitio (1-0) was the winner by decision after six rounds versus Naiara Olmedo (1-2) on Saturday Nov. 30. The featherweight clash took place in Galicia.

Panida Chatluang (1-4) knocked out Tassana Paladsrichuay (4-6) in the first round on Tuesday Nov. 26. The minimum weight fight took place in Bangkok.

Rachel Ball (5-1) was the victor by decision after 10 rounds against Bec Connolly (3-7) on Saturday Nov. 30. The featherweight title fight took place at Wiltshire.

On Thursday Dec. 5, super flyweights Rianna Rios (0-0) and Elizabeth Tuani (0-0) meet in a four round fight at Costa Mesa, California.

On Friday Dec. 6, lightweights Anyela Lopez (1-0) and Chelsey Anderson (2-0) meet in a four round clash at Phoenix, Arizona.

On Saturday Dec. 7, minimum weights Louisa Hawton (9-2) and Lorraine Villalobos (4-2) meet in a 10 round clash at Brooklyn, New York for the WBC interim world title.

On Saturday Dec. 7, super lightweights Patricia Juarez (4-2) and Hannah Terlep (3-0) meet in a six round fight at Denver.

On Saturday Dec. 7, featherweights Marcia Agripino (3-2-1) and Michelle Cook (1-1-2) meet in a six round clash at Mashantucket, Conn.

On Saturday Dec. 7, welterweights Jessica Klabak (0-0) and Jessica Jacobs (0-0) meet in a three round fight at Madison, Wisconsin.