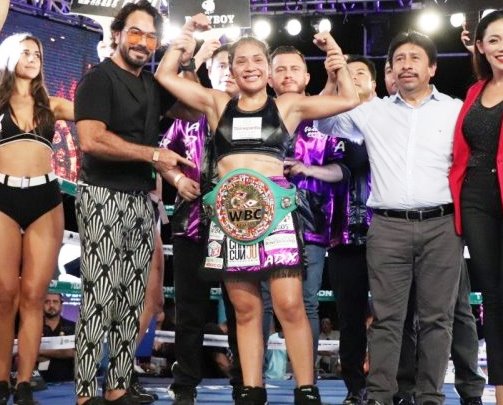 The scheduled 10 round fight was the main event Saturday night from Cancun, Mexico, live on the Televisa network in Mexico.  Promociones del Pueblo presented the fight card in association with Cancun Boxing.

The official score cards were 100-90 three times for the defending world champion from Mexico City.

After scoring a surprise win over one of the longest-reigning female world champions Zulina “Loba” Muñoz, back in the summer of 2017, Martinez has steadily become one of the most impressive champions south of the border.

With not much technique but with extraordinary conditioning that allows her to throw punches in bunches, the 27-year-old Martinez has strung together eight wins since her last loss.  Her defenses have come to Carlota Santos, Irma Garcia and former world champion Yulihan Luna.  In her last fight Martinez squeaked by with a split decision over her toughest test yet against former two-divisional world champion Jessica “Kika” Chavez.

In the run-up to Saturday night’s fight it was all but set in stone that with a win Martinez would face off against Chavez again in a rematch.

Despite her advantage in height and length the green Balderas, 23, turned to be no match for the experienced Martinez who controlled the action from the opening to last bell.

Prior to the championship fight Balderas had never faced anybody of Martinez’s experience or caliber while her biggest fight to date was a losing effort against Diana “Bonita” Fernandez in September for the WBC Latino regional strap.

Martinez clearly set the pace from the opening bell planting herself in the center of the ring and forcing the southpaw Balderas to circle around the perimeter.  Martinez aggressively used her offense as her defense winging power punches from every angle while focusing on the long torso of Balderas.

Early on Martinez found a home for her right hand, seemingly the only straight punch in her repertoire, and she began to throw and land it more often.  Balderas in the early rounds had no answer for the constant barrage of punches that were coming her way only moving laterally while throwing anything in hopes of slowing down Martinez.

It didn’t work as Martinez only picked up steam like a locomotive going down hill.  Round after round Martinez threw more and more punches and at times landing that straight right hand flush to the chin of the off-balanced Balderas pushing her back towards the ropes.

From the fourth round on Martinez was looking for the knockout concentrating on the body of the much taller Balderas in hopes of slowing her down but the Monterrey fighter proved to be a tough one as she absorbed the attack and looked for opening to score.

Balderas proved too inexperienced to time Martinez and counter attack between her opponent’s punches, but she began to see some success as Martinez began to slow down a bit.

Balderas scored a number of right hands in the last half of the fight coupled with wide hooks to the body but it was too few and far in-between to cause any damage.  When they landed, Martinez would just take a half a second to recoup before continuing with her come-forward style.

In the seventh Balderas had some success in catching Martinez as she came in mostly with straight left hands, as she was able to create some distance between them.

It was too little too late as Martinez was in a rhythm pushing Balderas against the ropes and attacking, always looking for the knock out.  Balderas proved despite her lack of skill, she has an abundance of heart and conditioning as she never looked hurt form the flush right hands Martinez landed as well as the constant power punches to the body.

Martinez’s win was never in question as she was always clearly dominating.  The announced unanimous decision was no surprise.