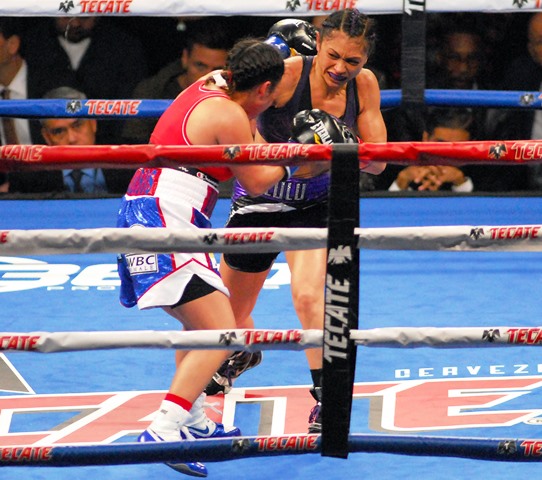 There is no denying female boxing is on an upswing.  Some might say a new golden era.  There is no indication of the bubble bursting any time soon with new ways to watch and follow the sport with applications like DAZN and ESPN+ as well as more traditional terrestrial networks like Fox Sports and Showtime.

In the first part of our now traditional wish list we listed the bouts we would like to see from heavyweight to super featherweight.  Now in our second and final part we will name what boxing matches we hope to see from featherweight to the lightest of weight classes in all of boxing, atomweight.

Jelena Mrdjenovich (40-10-2, 19KO) vs Amanda Serrano (37-1-1, 27KO) – Hate to beat a dead horse but this fight needs to happen.  In recent years the 126-pound weight class was one of the most competitive in the sport but now many of the names have either gone up in weight or taken a sabbatical.  Where are you Jennifer Han?  Two years ago, this fight was one of the most talked about and it still makes sense.  With her dominating win over Heather Hardy in 2019 Amanda Serrano is the current WBO and interim WBC champion.  The Canadian Mrdjenovich is the full-fledged WBC and WBA world champ.

Some might say the 126-pound version of Serrano is her best.  There she is quick enough to out box her opponents as well as strong enough to look for the knockout.

It is rumored some years ago the fight didn’t happen because of what else? Money. Now with a wider audience for the sport and more demand for good quality fights perhaps there is a chance for the demands to be met.

Yamileth Mercado (15-2, 4KO) vs Mariana Juarez (59-9-4, 18KO) – There is nothing better than making history. Juarez, perhaps the most popular Mexican female fighter ever, is already in the record books as Mexico’s first three-divisional female world champion.

She wants to make it four.

As soon as she captured her current title, the WBC bantamweight strap in 2017, she has been making her case for a challenge for the 122-pound title.  Things got a little easier when back in November the WBC belt changed hands between African Fatuma Zarika and Mercado of Mexico. As soon as Mercado saw her hand raised, Juarez began to beat the drum of a possible match up for 2020.

Juarez has also hinted if she wins a fourth why not a fifth at 126?

Lofty dreams for a 39-year-old but if someone can fulfill them, its Juarez.

Daniela Bermudez (27-3-3, 8KO) vs Jackie Nava (35-4-4, 16KO) – Unfortunately for Bermudez, she might be the best current female fighter nobody has ever heard of.  The 30-year-old from Argentina figures in every pound for pound list that counts and has fought and beaten some of the biggest names in the sport.  She has stated one thing: she thinks can change her profile with a big-name fight in the United States.  At the moment there isn’t a big enough U.S.-based fighter that would make sense for Bermudez to face.

Bermudez needs a big name to make a splash. She has already beaten Mariana Juarez and in 2018 she defeated Marcela Acuña.  The only one left is Nava from Mexico.

Although attractive this fight might be a bit of wishful thinking, we are allowed to dream.

Guadalupe Martinez (20-9, 6KO) Jessica Chavez (30-4-3, 6KO) – This fight more than likely will happen in 2020.  They faced each other in April with Martinez taking a split decision over the much more recognized and respected Chavez.  Since defeating Zulina Muñoz for the title in the summer of 2017, Martinez has slowly but surely made a name for herself as one of Mexico’s most solid world champions. A second win over Chavez will not only cement that but put her over the top in popularity in her home country.  Look for that fight in the first half of 2020.

Honorable Mention – Martinez vs Diana Fernandez (22-3, 4KO) – Fernandez might not be a world beater, she’s challenged for a world title twice and came up short, but she is an entertaining fighter with a television friendly style.  The fact she knows how to market herself and is always willing to mix it up verbally with some trash talk doesn’t hurt either.  She has asked for another world title opportunity, this time at 115 pounds, against Martinez.

She might be just unlucky enough to get it.

Naoko Fujioka (18-2-1, 7KO vs Seniesa Estrada (18-0, 7KO) – In our wish list for 2019 we had Fujioka as our honorable mention.  At 44-years-old there isn’t much time for Fujioka, long considered the best female fighter Japan has ever produced in the sport and she is still seeking what she has longed for in all of her professional career, a fight in the United States.

This fight will kill two birds with one stone.

It will give Fujioka the fight in the U.S. she has dreamed about and unify the WBA in the division. Estrada with her win over Marlen Esparza in November in their much-anticipated fight captured the interim WBA title while Fujioka is the full-fledged champion.

It is no secret the 112-pound weight class is not Estrada’s natural weight but one thing she has mentioned numerous times is that she wants world titles in 2020.

This is her chance.

Yesica Bopp (36-1, 16KO) vs Yesenia Gomez (17-5-3, 6KO) – In Argentina’s “Tutti” Bopp, 35, we have another legendary fighter near the end of her career who is looking for one last payday preferably in the United States.

Yesenia Gomez is not it.

What Gomez does represent is the green and gold WBC belt.  Add that to Bopp’s WBA strap and now you perhaps have an enticing entrée for who can give Bopp what she craves.

In our wish list of 2019, we asked for a Bopp-Estrada fight in the states.  We didn’t get it.  It looks like we might have to take the long route and make it a more attractive not only for Estrada but for her promotor, Golden Boy, to make an offer to Bopp.

If Gomez wins then Bopp sets sail for the horizon and a fight between Estrada and Gomez is much easier to make since the WBC champ is promoted by Mexico’s Pepe Gomez.  Gomez, of Cancun Boxing, has a cozy relationship with Golden Boy Promotions.

Anabel Ortiz (30-3, 4KO) vs Yokasta Valle (18-2, 8KO) – Mexico’s Ortiz has been threatening to leaving the 105-pound division soon. She has been the WBA champion since 2013.  It might be prudent for her to hold off for a bit.  For the first time in quite some time there is another champion from a Latin American country which might make a face-off quite intriguing not only in the ring but in the buildup.

After failing twice to capture a world title, Valle of Costa Rica finally strapped a world championship belt, the IBF, to her waist with a split decision win over Spain’s Joana Pastrana.

The winner of this unification fight will have a strong case in perhaps forcing the WBC champion, Tina Rupprecht, in leaving Europe to challenge for all the available straps in the near future.

Monserrat Alarcon (13-4-2) vs Louisa Hawton (10-2, 5KO) – The 102-pound weight division, unique to female boxing, is the most overlooked of them all.  Until recently it was dominated by Asian fighters whose profile wasn’t that high in their home countries let alone on this side of the world.  Fabiana Bytyqi changed that in late 2018 by capturing the vacant WBC strap but earlier that year the division got what it really needed, a Mexican fighter.

It is no secret the Mexican fan base is one of the most important, if not the most, in the sport.

Alarcon is a two-divisional world champion with a no holds barred style and pitting her against basically her spitting image style-wise in Hawton could only produce fireworks. Hawton’s recent rematch against Lorraine Villalobos, one of the best fights of the year, put the boxing world on notice regarding the tiniest of weight classes.

A fight between Alarcon and Hawton would put the division on the forefront of the sport.