Franchon Crews-Dezurn vs Alejandra Jimenez
Written by: David A. Avila 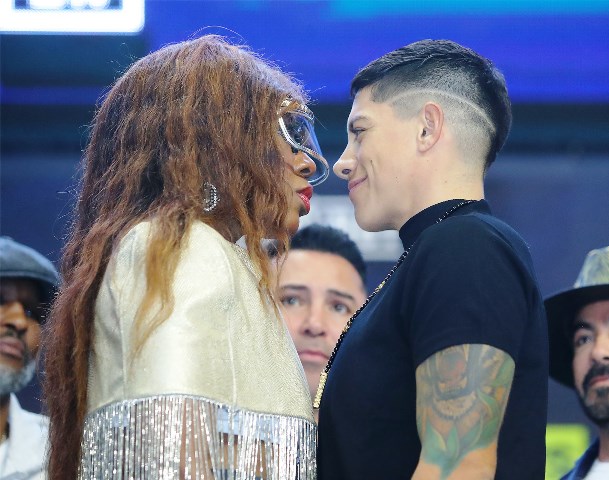 Few endure for long the hidden potholes and unforeseen roadblocks the life of a female prizefighter can produce.

Franchon Crews-Dezurn learned early in boxing to forsake wheels and put on tracks like a Sherman Tank. Now she’s rolling.

“I’m at a better place than I was three years ago, two years ago, one year ago, and I’m living in the moment,” Crews-Dezurn said at the San Antonio press conference.

With a voice like an angel outside of the boxing ring Crews-Dezurn can sing with the best of them. She once competed on American Idol and passed multiple rounds on the popular singing competition.

But inside the boxing ring that voice becomes silent and she uses her fists like a barroom bouncer at an after-hours blue collar drinking hole. There’s no mercy in her when that bell rings.

Nearly two years ago Crews grabbed the WBC title with a convincing win over Maricela Cornejo in Las Vegas in 2018. Despite winning the world title a scarcity of opportunities convinced her that she needed to make her own path. A chance meeting with Golden Boy Promotion’s Eric Gomez and Bernard Hopkins resulted in the California promotion company signing her to a contract.

Super middleweights are available in the amateur ranks, but pro fighters are not as abundant, especially to face a world champion.

“I was just happy to be fighting again,” said Crews.

Last summer a clash with heavyweight champion Jimenez was set to take place in Los Angeles. But within days of the match up the Mexico City prizefighter was unable to reach Southern California.

Once again Crews was stranded in the boxing ring without a foe.

But a surprise replacement was found. Former foe Maricela Cornejo who she defeated for the WBC title was willing to take the fight within days. Another incentive was the WBO title was also added to the prize.

A different more aggressive Cornejo showed up in the boxing ring at Los Angeles this time. The tall Mexican-American fighter slugged it out with Crews and it erupted into an unexpected shootout. Fans delighted in the action-packed super middleweight fight.

Crews emerged the winner and picked up the WBO title by unanimous decision.

“I’m thankful the fans embrace me and saw my heart,” said Crews.

Now she faces Jimenez a powerful punching fighter who dropped down several weight divisions because she was unable to find opposition as a heavyweight.

Jimenez defeated Martha Salazar for the heavyweight title back in 2016 and defended the WBC heavyweight title only once since that time. When she was unable to make the flight to Los Angeles last September, it was promised she would fight Crews again.

Here they are face to face, finally.

“I want my opponent to come in confident, I want her to bring her best because I’m going to bring my best,” said Crews. “I’m going to adapt to whatever is in front of me.”