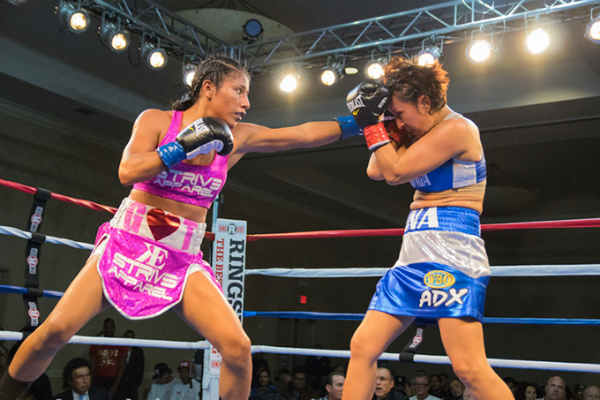 In a country known for producing fearless warriors most Mexican female fighters shy away from facing Tijuana’s Kenia Enriquez.

Almost three years ago Enriquez grabbed the interim WBC light flyweight world title by knockout against Maria Salinas. Despite holding the interim title she has been passed over and over again while less deserving fighters get a crack at the actual world title.

Enriquez, 26, began fighting at age 18 and as a professional she quickly established a reputation as a boxer-puncher able to fight almost any style. Over the years she has handed seven opponents their first loss.

Maybe it’s the primary reason that in a country known for warriors, Enriquez, is the one others fear to face.

Face to face she’s a petite woman with a crinkly voice and non-aggressive manner. She’s more college student than killer puncher with a penchant for destroying opponent’s will with her body shots from hell.

Back in 2014, while promoted by an American promoter, the petite fighter won the WBO flyweight title against Ana Arrazola by unanimous decision. But in her next fight she was beaten by veteran American Melissa McMorrow.

Since that loss Enriquez dropped down to her more natural weight 108 pounds and began terrorizing the division. The actual WBC light flyweight titlist Yesenia Gomez has held the title for nearly two years and has defended it three times against less deserving opposition.

It’s a stark reminder that money and politics dictate who fights for world titles.

Enriquez has dreams of fighting in America and has no hesitation about fighting abroad. She just wants to prove her ability against the best female warriors in the world.

“I’ll fight anywhere against anybody,” said Enriquez.  “Each  day I work more and more for the opportunity to shine and show the world my potential.”

Three world title fights took place this past weekend with American fighters facing two Europeans and a Mexican. All three were compelling contests with two resulting in world titles changing hands. It was good for the sport.

First, Claressa Shields blitzed Croatia’s Ivana Habazin with her speed and agility for 10 rounds including a knockdown from a body shot. What was remarkable was that Habazin was wearing a protector around her waist that was above her belt line.

Protectors should not be allowed.

In the other world title clash, Sweden’s Elin Cederroos knocked down Alicia Napoleon-Espinosa in the second round then staved a counter-attack from the American fighter to win by close but unanimous decision.

Protectors should not be worn by any fighter inside the boxing ring. Some fighters say it protects them from shots below the waist, others say it helps them fit in their trunks, I say it means a fighter cannot take a body shot and uses them to protect from knockout. It should not be allowed.

Using a protector around the waist is like a person using head gear and claiming it keeps their hair out of their eyes. No protectors should be allowed by men or women.

On Saturday Jan. 18, flyweights Jennifer Meza (2-0) and Maria Sol Baumstarh (1-2-1) meet in a four round bout at Pinamar, Buenos Aires.

Eda Essaoudi (4-0) defeated Nana Dokadze (1-4) by decision after four rounds on Saturday Jan. 11. The featherweight match was held in Dorsten.