Kenia Enriquez Speaks Out, Layla McCarter and More
Written by: David A. Avila 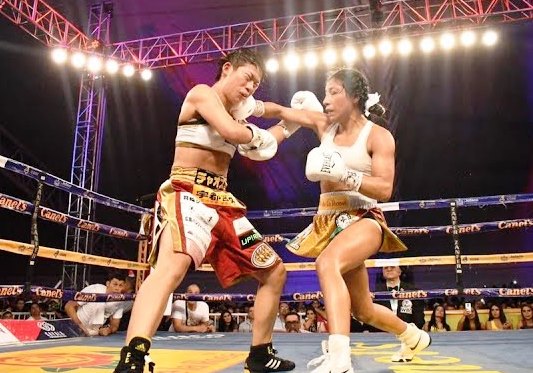 Two of the best female prizefighters on the planet Kenia Enriquez and Layla McCarter share the same dilemma: both are shunned and avoided by world champions and top contenders.

It says a lot about boxing sanctioning organizations such as the WBC and IBF that have allowed this to go on for years.

Enriquez (23-1, 9 KOs) knocked down and rumbled past Japan’s Chaoz Minowa (6-3) to win by unanimous decision on Saturday at Tamazula, Mexico. It was her fourth defense of the interim WBC light flyweight title.

For the past three years Enriquez has waited her turn to fight for the actual WBC light flyweight world title. The Tijuana-based prizefighter has scared off competition in her native country for years. She’s like the boogey-woman in Mexico.

Currently the actual titlist for the WBC light flyweight title is Yesenia Gomez of Cancun, Mexico. She’s not a bad fighter but since winning the title on September 2018 against Esmeralda Moreno the WBC allowed her to bypass Enriquez on multiple occasions.

There’s no sense or reason other than Gomez is being protected by the WBC an organization that claims to be fair and protective of the sport. Enriquez more than deserves a crack at the actual title. In truth, she is the real world champion at light flyweight.

On Saturday, the petite fighter Enriquez knocked Minowa across the ring in the fifth round that prompted the referee to rule it a knockdown because the ropes held her up. The 26-year-old Tijuana fighter dominated the action for 10 rounds winning every round according to the three judges. But it was not an easy fight.

“My victory against Minowa was the beginning of more activity, 10 rounds with a rival that never stopped looking for the win. It taught me that I can improve, there were moments that I tried everywhere to take advantage, first hitting the body but she was elusive. Then I started with my right hand and I succeeded. It was a tough fight that leaves me full of emotion and ready for the next one,” said Enriquez who is also a former WBO flyweight world titlist.

Enriquez has long been one of Mexico’s best female fighters. The world knows her talent, but that doesn’t seem to be enough to make the WBC the mandatory challenger to Gomez. Three years have passed since Enriquez won the interim title but she still has not fought the actual titlist. It’s a stain on the WBC.

“I have already talked about the unification and I am sure it will happen and I will work very hard to get a win.  I know that I am capable with the skills I have and if this fight comes versus the actual champion I will show the world with action,” said Enriquez about eventually facing WBC titlist Gomez. “And if it does not happen, I am willing to talk about losing weight to the straw weight level and achieve a title in a third different division versus Anabel “the Wasp” Ortiz.”

Another fighter avoided for years has been Layla McCarter who has not lost a fight in more than 12 years. Though a fight with Claressa Shields was never thought possible because of the weight disparity, the recent drop to super welterweight by the three-division world champion changes everything.

Could McCarter fight Shields this year?

“Shields would probably be the toughest fight of my career,” said McCarter adding that she likes the idea.

Shields was also looking to fight Braekhus, but like McCarter, she seems to be passed over. Braekhus prefers fighting the smaller Katie Taylor. It’s still a tough fight for Braekhus, but if that happens, it leaves Shields without another foe at super welterweight.

“She has size and skill and she is talented,” said McCarter of Shields. “I’ve done really well with big opponents.”

McCarter now participates in the super lightweight division but is capable of fighting anywhere between lightweight to the super welterweight division. Though she knows it would be a task, a match with Claressa Shields would be a match she would accept. Of course, everyone knows Shields doesn’t duck anyone if it makes money and sense. Could it be possible?

“It will be a great fight,” says McCarter.

On Friday Jan. 25, bantamweights Lucrecia Arrieta (0-1) and Brenda Perez (0-3) meet in a four round fight at Cordoba.

On Saturday Jan. 25, super bantamweights Martine Vallieres-Bisson (1-0) and Adilene Martinez (1-0) meet in a four round fight at Montreal.

On Saturday Jan. 25, super featherweights Jekaterina Marcenko (0-0) and Diane Schembri (0-0) meet in a four round bout at Rigo.

On Monday Jan. 27, minimum weights Yumiko Shimooka (4-7) and Yumi Narita (3-4-3) meet in a six round bout for the Japanese title at Tokyo.

Kenia Enriquez (23-1) defeated Japan’s Chaoz Minowa (6-3) by unanimous decision after 10 rounds on Saturday Jan. 18. The interim WBC light flyweight title fight was held at Tamazula, Mexico. It was Enriquez’s fourth defense of the title since 2017.

Maureen Shea (29-2-1) won by knockout against Martina Horgasz (5-6) on Friday Jan. 17. The bantamweight fight was held at Hallandale, Florida.

On Saturday Jan. 25, super middleweights Amy Lemenager (1-0) and Leslie Pope (4-0) meet in a four round match at Minneapolis, Minnesota.